The Ripple Effects of Investing in Women 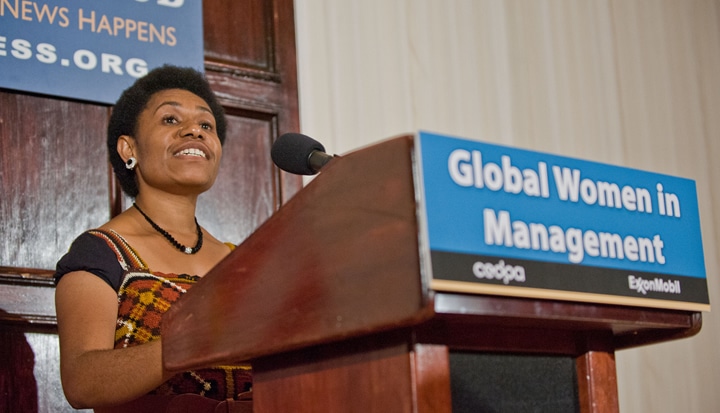 The Ripple Effects of Investing in Women


On International Women's Day, people around the world celebrate women’s achievements. In my home country of Papua New Guinea (PNG), there has never been a more important time to highlight the progress that is being made and the important link between investing in women and strengthening community and economic development.

In 2012, I participated in the Global Women in Management program, which is administered by Plan International USA with support from the ExxonMobil Foundation.

The four-week course gave me and hundreds of other nonprofit and community organisation women leaders from around the world the skills and confidence to bring economic and social change to our communities. Using the lessons I learned from the Global Women in Management program, and in close collaboration with other program alumnae, I was able to help the marginalised, rural women of the Gulf and Southern Highlands provinces in PNG.

In the community of Samberigi, for instance, our efforts helped a group of women open their first vegetable market, earning income to benefit not only themselves but their families and neighbours.

The impact of this market on the community has been immense, particularly in facilitating the advancement of the women involved. One woman who grew produce for the market gained confidence in her leadership abilities. She was soon elected as school chairperson, a position historically held by men.

Meanwhile a spinoff women’s group helped to raise the visibility of one of the women involved so much that she was elected the first female mayor in the town of Kikori. These are just a few examples of the ripple effects of investing in women.

I am just one of 23 Global Women in Management program alumnae from PNG. This month, 26 more women from my country will participate in the first-ever program held in PNG. I am excited to see what they will do with the skills they gain.

As the world observes International Women’s Day, remember that investing in women’s economic empowerment is one of the most powerful ways to promote education, health, and other positive global development outcomes that lay the groundwork for a prosperous future.

For nearly a decade, ExxonMobil’s Women’s Economic Opportunity Initiative has helped women around the globe fulfill their economic potential and drive economic and social change.