The Power of the Mobile Phone to Change Lives 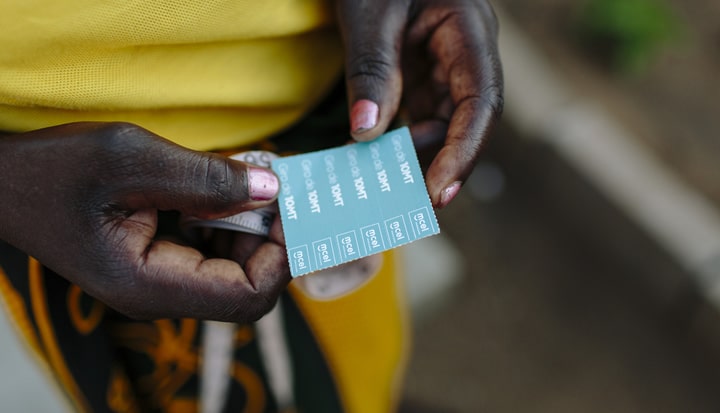 The Power of the Mobile Phone to Change Lives

Click here for more stories about
SDGS
Friday May 29 2015

Celeste Boca holding the airtime (phone credit) that she sells. She enrolled in AMIMO’s (Association of Migrant Miners Mozambique) income generating activities workshop, supported by VSO through the Phoning Out Poverty and AIDS (POPA) project. The training is also supported by Mcel, a Mozambican phone company, who provide subsidized airtime that the women can sell for a profit for themselves. Armed with new skills, she has developed a mobile phone airtime business. Credit: ©VSO/Ginny Lattul

Telecommunications constitute a powerful tool, not only for connecting the world, but also for changing it and the high use of mobile phones in developing countries has opened up new ways to help people to change their circumstances.

In Mozambique, the Phoning out Poverty and AIDS (POPA) project trains and supports poor and marginalized women from mining communities who are affected by HIV and AIDS. The women are helped to develop small-scale phone businesses through which they sell airtime to people in their communities. This additional source of income, coupled with a variety of HIV and AIDS training provides women with the knowledge, skills and resources they need to improve their health and livelihoods simultaneously. Designed as a response to studies showing that low socio-economic status has a negative impact on people living with HIV and AIDS, especially women, POPA is a private sector partnership between VSO and Mcell, one of Mozambique’s largest telecommunications companies. More widely, across the region, Vodacom, MTN and Econet deliver POPA in communities hardest hit by the HIV and AIDS epidemic, including Swaziland and Lesotho, where adult HIV and AIDS prevalence rates are as high as 27 percent

One of those women is Celeste Boca. Celeste’s husband died of tuberculosis after returning home from working in a South African mine. After the death of her husband, Celeste had no money and a son to feed. She was approached by an organisation called AMIMO (Association of Migrant Miners Mozambique) that supports migrant miners and their families. She enrolled in their POPA workshop and soon, armed with new skills, developed a successful milk, sewing and mobile phone airtime sales business. Celeste says, “I feel proud that I can support my family. I’m doing it all by myself. Many people can’t imagine that there is no man at home doing this.”

In Asia, teachers have tapped into the power of telecommunications in a different way. In Papua New Guinea, the SMS Story project improved learning outcomes for children and built the capacity of the country’s schools by sending teachers new lesson plans each day on their mobile phones. The majority of primary school children in PNG are unable to read English, a problem stemming in large part from the school’s inability to afford adequate teaching and learning materials like books. While teaching and learning materials are scarce, nearly every teacher has a mobile phone. VSO partnered with the PNG Department of Education and Digicel mobile phone company to deliver SMS Story, which improved not only teaching quality, but also children’s reading abilities. The project’s baseline research, delivered over the course of 20 weeks at rural schools in two provinces, Madang and Simbu, revealed that the teachers who received the daily SMS were actively engaged with the content sent to them as text messages. Findings also revealed that students in SMS Story classes improved their reading abilities significantly more than those who were not.

Intelligence data on digital empowerment of people in emerging markets reports that the world’s developing economies account for 80 percent of the world’s total mobile connections, with markets continuing to grow significantly quicker than in developed countries, where mobile penetration is nearing 100 percent and connection growth is slowing. This momentum emphasizes the fact that telecommunications constitutes a major catalyst for change in developing countries, where it empowers people, especially women, to take control of their futures.