The Next Digital Revolution 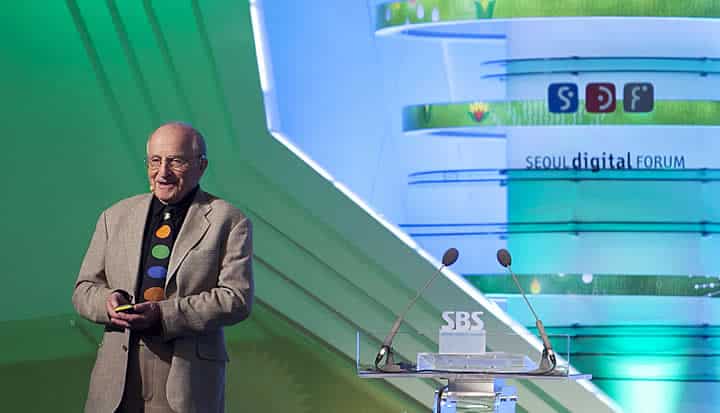 THE NEXT DIGITAL REVOLUTION


In May this year I had the pleasure of speaking at Seoul Digital Forum (Korea). I was stimulated and challenged by Steve Ballmer’s keynote address in the morning, especially the description of the new Windows 8 and all its bells and whistles. But I had one problem with it. What Steve talked about has no relevance at all to the 2.6 billion customers in the world who live on less than two dollars a day. I believe it’s those customers, and their tastes and preferences that will determine the success or failure of companies like Microsoft within the next 25 years.

In my talk, I focused on three things. The first of which is: business for the other 90 per cent. Secondly, the role that simplicity and appropriate technology can play in businesses for the other 90 percent. Thirdly, I touched upon the future of the digital revolution.

Let me start by pointing out that Microsoft and most of the other businesses in the world are wholly focused on servicing and delivering products to the richest ten per cent of the population. We need a revolution in business to reach the other 90 per cent. The reason for that revolution is not because it’s morally right to serve poor people as customers but because there are massive new profitable markets awaiting any bold company that is willing to take the risk to design ruthlessly affordable products and services to reach that under served market of the other 90 per cent. In my view, the most important subsector of the other 90 per cent are the 2.6 billion customers, about 40 per cent of all the customers in the world, who live on less than two dollars a day.

Let me say a little bit about appropriate technology and simplicity. When I started working in development some 30 years ago, a book called “Small is Beautiful,” by Fritz Schumacher inspired me. Unfortunately, the appropriate technology movement that was created by Fritz and that book died 20 years ago. It died because it was peopled by tinkerers who solved technical problems with technology instead of hardheaded entrepreneurs who design for the market.

The irony is that the giants of global business have used some of the basic principles of appropriate technology effectively. Those giants and the companies they formed literally transformed business as it is today.

Before I discuss that process, I want to say a little bit about what “the other 90 per cent” consists of. Let me point out that there are some 5.6 billion people in the world who earn less than $5,000 a year, which is about 14 or 15 dollars a day. There are 2.6 billion people in the world who earn less than two dollars a day. Eighty per cent of all of the people in the world earn less than ten dollars a day. That is a massive market opportunity that conventional big businesses are missing out on. Some cutting-edge businesses are indeed paying a lot of attention. Cummins Inc., as an example, earns the majority of its profit and growth in countries like China and India. But that company took the risk to get involved there 25 years ago. More than 40 per cent of Unilever’s sales come from emerging markets. Procter & Gamble, which has 20 brands that sell a billion dollars a year, is trying hard to catch up with Unilever in terms of getting more customers at the bottom of the Pyramid.

In the digital field, mobile phones are already providing a variety of vital financial services to customers who live on less than two dollars a day. They are also providing vital information for dollar-a-day, one-acre farmers concerning the best locations for them to sell their crops. Overall, there is a huge unmet opportunity.

Masai Goat Herder Making Use of A Cell Phone

Let me go back to simplicity and appropriate technology. Although I believe the appropriate technology movement died, all of the things that I consider to be major breakthroughs in business have at least two things in common. They are: radical innovations in affordability, as well as in miniaturization. For example, in 1927, the U.S. auto industry was selling primarily to rich playboys. AtPictured Left- 1927 Cadillac LaSalle, $2685, 3770 pounds Pictured Right- 1927 Ford Model T, $360, 1655 poundsthat time there were two dominant models: The Cadillac La Salle cost about $2,700 and weighed 3,770 pounds, while the Ford Model-T, introduced by Henry Ford, cost $360 and weighed less than half of the La Salle.

Of course, Ford’s dream was to create a car that was attractive to the working class. But what happened next? This is a trend that I’ve seen in many transformative businesses — they inevitably go up-market. The successors of Ford’s inventions in Detroit became: Chrysler, Ford and General Motors, formerly known as the “big three”. General Motors was the biggest car company in the world some years ago. The large aspirational model with high margins that General Motors, Ford, and the others made big profits on. But three years ago, Ford, Chrysler and GM were all almost brought to their knees by a number of factors, including competition from Japanese and German cars. These overseas competitors were smaller, cheaper and more fuel-efficient. As time goes on, Japanese car makers are finding that Korean cars are the new competition, primarily on price point. This is a visible trend.

When computers filled a whole room in a college and cost $50,000 to a million dollars, Steve Jobs and Steve Wozniak created the Apple II computer, which sold for about $1,300, weighed 34 pounds and was small enough to sit on a desk.

Again, it’s all about miniaturization and affordability. So, what happened to the personal computer that Apple developed? Well, IBM entered the market and through mass manufacturing and other things, created a product that was not as cool, not as user friendly, but was more affordable and readily available in large quantities. This is how IBM and an army of PC clones took over that market.

So, what’s needed to reach the other 90%? First, a company has to pursue what I call the ruthless pursuit of affordability. Second, the company needs to understand in depth, the customers in “the other 90%”. Third, it’s critical that the company know everything there is to know about the context.

It’s quite a challenge to learn about the preferences of the other 90%. Another great challenge is the problem of last mile distribution. A final challenge is how to reach scale. I think these markets can be very successful and very profitable. What I am doing now is creating new companies that are capable of each reaching 100 million customers and generating $10 billion in sales.

So how does all of this apply to the digital revolution? Well let’s look at some of the companies that are current leaders. Apple is the richest company in the world. It basically makes cool toys for the ultra rich, probably the top five per cent of the world’s customers. Microsoft’s product line is also focused on the richest 10 per cent. Although they now have to deal with the challenge of Chinese knock-offs of Windows sold through EBay. As I’ve said before, mobile phones are already in the market of reaching poor people. There is One Laptop Per Child, a charity model that provides computers to middle-class children even though there are nearly a billion people in the world who don’t know how to read and write. Then, there is the $500 iPad. Apple is making very good profits on iPads and iPhones.

Recently a company called Datawind introduced a tablet device in India, referred to as the $35 tablet, but selling for around $50. That company had problems, but it demonstrates that it is possible to create a tablet for $35.

In my view, if companies in the digital space can develop a $35 computer device, my challenge to Apple and other companies in this space to create a $15 iPad.

They could establish a base at the Bottom of the Pyramid, which will give them immense strength to serve affluent customers at the same time. Will the digital revolution learn to operate successful businesses at scale, which are profitable for the other 90%, or, will the digital companies face the same competitive challenges that General Motors faced?

I hope that products like a $35 computer and a $15 iPad are produced in the next five years. What will the actual performance of the digital industry of the future be? Only time will tell.

This article is based on a speech delivered by Paul Polak at the Seoul Digital Forum (Korea) in May 2012.

One response to “The Next Digital Revolution”