The League of Intrapreneurs: Meet the Winners 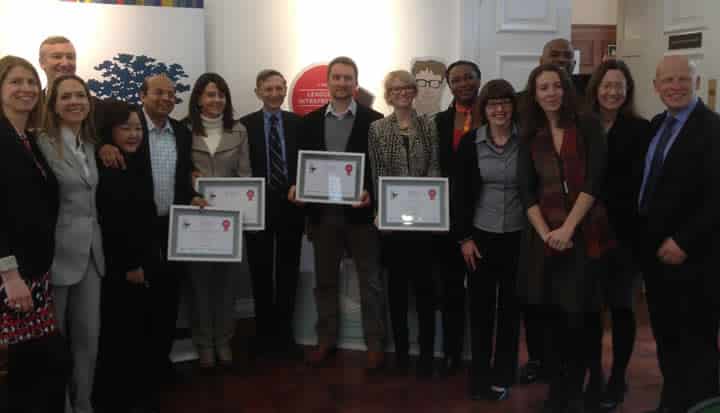 The League of Intrapreneurs: Meet the Winners


April 9 was a day for the unsung heroes driving change within large corporations - either by shifting development challenges up their CEO's agendas or bringing the expertise (and/or budget) of a multi-national to bear on identifying and solving a specific social problem. These are the Social Intrapreneurs, and at an awards ceremony in London, Bill Drayton, President of Ashoka, and Olly Benzecry, Managing Director of Accenture UK, announced the four winners of the Ashoka Changemakers "League of Intrapreneurs" Competition.

The four winners, chosen from 15 finalists, were:

Nearly a third of people in Brazil are either un-banked or otherwise unable to access banking services. But when a senior manager at Tribanco (the financial arm of one of the largest distributors in Brazil) suggested that the company may have to drop financing for small and medium sized businesses altogether Aparecida knew that would be wrong. Especially since Grupo Martins was itself founded by former shopkeeper.

As the director of HR and training she hatched a plan that would eventually see Tribanco training its own customers in the small and medium sized business sector so that it could better provide finance for them; transforming businesses that could otherwise have been left high and dry. To read her full story, and the impact of the programme click here.

When it comes to healthcare in developing countries it’s diagnosis that’s half the battle – especially in remote rural areas where people are unwilling to take a day off work and travel miles to the nearest clinic just to get tested. However, early diagnosis is the first step to effective treatment. The seriousness of the problem struck Graham when he was volunteering in Africa. A child of a close colleague in Kenya, died of anaemia in the community ambulance he was driving back to the district hospital, over 20 miles away across rough back-country roads. This condition could so easily be diagnosed and treated in the UK and Graham realised that this was too common to be acceptable.

So Graham got in touch with the head of R&D at GSK. The challenge was to design diagnosis kits that were cost effective, accurate and able to be administered by sometimes untrained healthcare workers. To read more about how GSK started and open-innovation partnership with an NGO and Johns Hopkins University to make this a reality click here

Millions of small businesses exist in slums worldwide. Most of them do not have formally recognised addresses, which makes it difficult to send and receive goods. This was brought home to Sacha when a slum resident of Kibera complained to her that he had to walk 3.5km to the nearest post office whenever he ordered anything, and as often as not had to bribe the local officials in the process.

So Sacha and a team of colleagues from TNT Express collaborated with slum residents to study existing supply chains. Results showed that the main challenges lay in recognising locations and enabling secure payments. But that could be overcome by new technology. As a consequence, TNT Express' Corporate Responsibility department developed a solution for slum deliveries. Working under the umbrella of the World Business Council for Sustainable Development's (WBCSD) Technology Enablers Initiative (TEI), over a six-month period, TNT Express worked with Vodafone to explore how best to merge logistics with telecommunications. Find out more here.

Mandar Apte is perhaps the intrapreneur’s intrapreneur. The question was simple, how could Shell staff play a greater role in the innovation process the CEO had launched in 2011? After interviewing 200 of his colleagues the challenge was defined. Staff needed the training and the space to overcome things like lack of time, stress, fear of failure, judgements about ourselves or others, etc and Mandar realized that if the company could equip staff to overcome these blockers it could unleash greater potential and achieve its organizational vision.

How? The 'innovation learning' program did not exist. It was designed based on meditation practices and hence was very novel for a very traditional technical organization like Shell and the industry in general. In less than a year, the introductory sessions were attended by over 500 staff. Find out the rest of the story here.

Personal stories like these are a powerful way to inspire others, and we need to do more to showcase and celebrate them.

At the same time, and a point that came up strongly in the discussion that followed, we need to find ways to achieve greater scale: encouraging many more social intrapreneurs, but also finding ways to achieve bigger, systemic impact.

One part of the answer lies in creating an enabling environment for social intrapreneurs - the focus of a new report launched at the event by David Grayson and colleagues from the Doughty Center for Corporate Responsibility, entitled "Creating Sustainable Businesses through Social Intrapreneurism".

The other part of the answer lies in building connections between the intrapreneur and the outside world - to other intrapreneurs in other companies, or to others who can help them develop and deliver their ideas. A number of event participants suggested that in order to build these cross-company connections - needed if we are to create a movement to drive more systemic level impact - we may need yet another type of hero: a social extrapreneur.

What's clear - even if the jargon is not - is that this is the beginning of what promises to be an exciting journey.