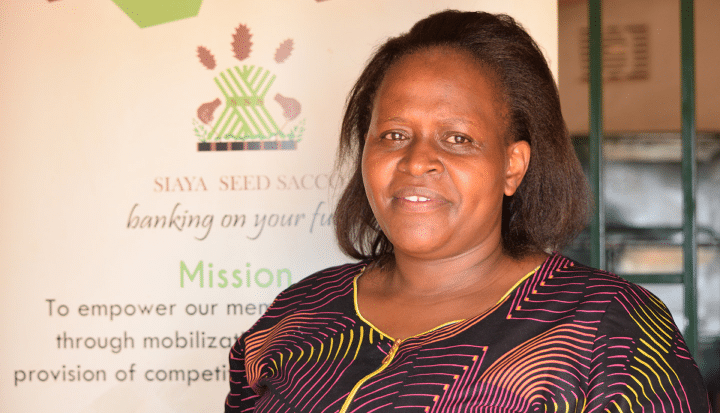 Victorine Atieno Owino leads the Siaya Seed SACCO, a farmer's cooperative that connects its members to financial tools and extension services to grow their agribusinesses. Photo by Gaitano Productions.

Victorine Owino transformed the savings and credit cooperative she manages into a thriving business hub in southwest Kenya, connecting local poultry farmers to training, financing and high quality supplies. Her journey from volunteer to manager is a testament to the transformative potential of women in leadership roles. And she’s now opening doors for others’ success.


Twenty years ago, Victorine Atieno Owino began her career as a volunteer at the Ugunja Community Resource Center in southwest Kenya’s Siaya County. She filled her days organizing books as a librarian and handling paperwork as an administrative assistant, supporting the center’s work building the skills of local community members.

But a common need began to emerge from discussions with its members.

“Most farmers kept saying that they didn’t have finance to expand their enterprises,” Victorine recalled. “This is how the idea of forming a savings and credit cooperative came up.”

And so, in May 2007, the resource center established Siaya Seed Savings and Credit Cooperative (SACCO), a member-based financial institution, to extend the center’s services. Driven by its mission to “foster economic liberty” for its community, the SACCO offers loans to members at reasonable rates and provides training on financial literacy, saving and finance management.

As one of its founding members, Victorine was appointed as the acting manager and given staff to run the organization under the assumption that, after some time, they would hire someone else to fill the position.

“This, however, was not the case,” Victorine said. “I was later hired as a full-time manager; a position I have held to date for the last 14 years.”

Her journey — from volunteer to manager of a thriving savings cooperative — is a testament to the transformative potential of women in leadership roles, especially in communities where stigma often stands in the way of gender equality.

Today, Victorine handles the cooperative’s day-to-day operations, which include advising senior management, networking and fundraising. Under her leadership, Siaya Seed SACCO is realizing a future for local farmers where growth, success and a dignified life are opportunities within reach. 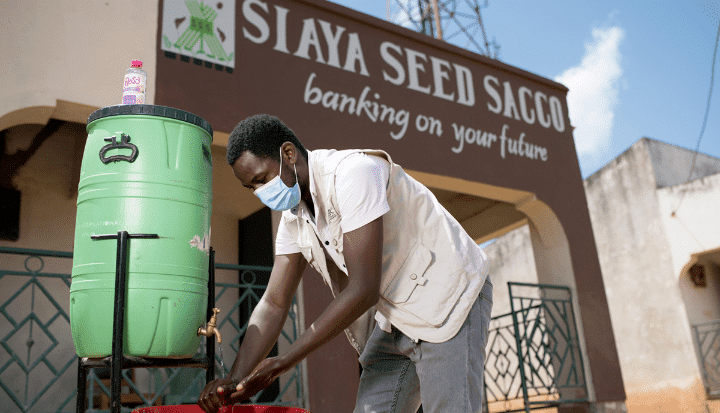 With Heifer's support, the SACCO expanded into the poultry enterprise and has broadened the scope of its services for local poultry farmers. Photo by Allan Gichigi, Heifer International.

One such partnership is with Hatching Hope Kenya, an initiative of Heifer International and Cargill that aims to improve the nutrition and livelihoods of smallholder poultry farmers.

With the project’s support, the SACCO expanded into the poultry enterprise, developing a business plan, receiving training, establishing trained technical experts to keep their birds healthy, and connecting to other businesses in the value chain, such as feed millers and buyers. The SACCO is also a resource for farming supplies like chicken feed and day-old chicks, and its members — now better connected to the agricultural market than ever before — have opportunity at their fingertips.

“The Hatching Hope project has a vision of supporting producer organizations like us to grow,” said Victorine. “The partnership with Heifer helped us identify the feed businesses as a viable venture and a way to generate extra income to support our other activities.”

Those activities are crucial in Africa, where limited access to finance, training and quality supplies for farmers running agribusinesses are major barriers to success — and especially prominent obstacles for youth looking to take up jobs in the farming sector. For a country like Kenya, where 60% of the population are under age 24, Victorine understands this as an area worthy of significant attention.

Just as the SACCO’s management and board members created a conducive environment for her to grow professionally, Victorine hopes to pay it forward by hiring younger Kenyans in the area. 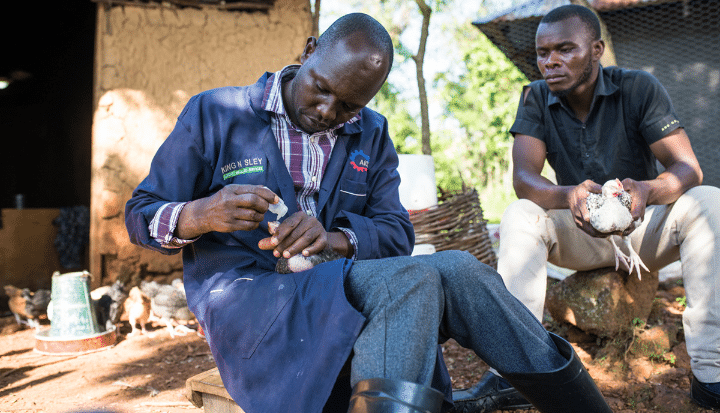 “Most young people need to gain experience to get into the job market,” Victorine said. “At Siaya Seed SACCO, I create that opportunity for the youth and support them to develop their skills. There is a great chance to grow to greater heights by staying focused, being consistent and having a clear vision.”

And like the farmers the SACCO supports, Victorine isn’t done honing her own skill set just yet.

“Working at Siaya Seed has been a great opportunity to learn. I equally must ensure I have the relevant skills and experience as I compete in the job market,” she said. “It’s because of this that even as a mother of five, I am currently pursuing a degree in business management.”

As for her motivation? Victorine credits witnessing firsthand the power of accessing tools like credit, farming materials and technical support.

“I’ve seen a woman come from not having any shelter and living in a deteriorating condition to, after two or three years, becoming empowered because of [our] support,” she said. “I wake up each day to ensure more people are empowered.”