The Impact of a Microfinance on Preventing Intimate Partner Violence 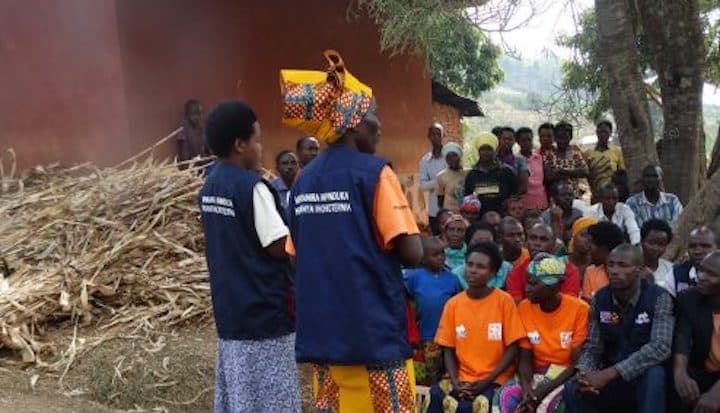 Indashyikirwa, meaning ‘agents for change’, is a program that seeks to prevent intimate partner violence (IPV) across Rwanda, and is being implemented by CARE Rwanda, Rwanda Women’s Network (RWN) and Rwanda Men’s Resource Center (RWAMREC). Here Erin Stern shares some key learnings, processes and impacts from the programme.

Indashyikirwa, meaning ‘agents for change’, is a program that seeks to prevent intimate partner violence (IPV) across Rwanda, and is being implemented by CARE Rwanda, Rwanda Women’s Network (RWN) and Rwanda Men’s Resource Center (RWAMREC). One component of the program was a 5-month weekly curriculum with 840 heterosexual couples recruited from CARE’s micro-finance village savings and loans associations. The participatory curriculum supported couples to examine power in their own lives, identify and manage triggers of IPV, and build skills for healthy, equal relationships. Using the VSLAs as a platform responded to CARE Rwanda’s (2012) assessment of this programming, which found that in many cases, men were controlling the function of the microfinance groups and money, and many women did not feel confident to make decisions about a loan without their husband’s approval. Approximately 25% of couples that completed the Indashyikirwa curriculum were supported to facilitate activism in their communities around the benefits of non-violent relationships for an additional two years.

Our session at SG2018: The Power of Savings Groups will provide an overview of this program as well as quantitative and qualitative impact evaluation data, which is being collected as part of the DFID-funded What Works to Prevent Violence against Women and Girls Programme. We will share programmatic and research perspectives on lessons learned from combining savings group activities with gender-transformative initiatives, and the impact this had on IPV, including economic abuse and decision-making over household resources.

For instance, the formative qualitative data indicated that economic stress was a key trigger of conflict among couples, and the strong social norm of men as heads of households and sole providers. As a result, many men were reluctant to publicly acknowledge their wives’ economic and decision-making contributions, even if they privately supported or benefitted from this. Many women reported experiencing economic abuse prior to the program, including disagreements over their right to work, not having access to finances or property decisions, or their husbands spending money on alcohol to the neglect of household needs.

The Indashyikirwa curriculum helped couples identify economic abuse as a negative form of power and IPV, and the financial and relationship consequences. It was helpful for men and women to learn about the many rights in Rwanda protecting women’s access to property and household resources. Many couples reported improved household development because of better conflict resolution, increasingly making joint decisions and communicating more openly about resources; skills learned and developed through the curriculum. As one male partner of a couple said at an interview 1 year following the curriculum’s implementation:

"When there is conflict between a man and his wife, they cannot reach development, they instead lose and consequently their household remains in poverty. But when they share ideas and give up quarreling, there is peace at home, they work in complementarity and then there is no more conflict and as a result they reach development."

Indeed, through applying relationship skills and using the weekly curriculum stipend, many couples made significant investments to improve household development including a bicycle, fridge, livestock, land or roofing. The curriculum encouraged a reduction of alcohol abuse for being a key trigger of IPV, and many men reported diminished alcohol abuse and spending on alcohol. The community activism component helped publicize models and the benefits of shared economic and decision-making roles in the household, and in doing so, challenge the norm of men as sole providers and decision-makers. The program also facilitated community dialogues on the recently enacted Family Law, which for the first time in Rwanda mandates joint headship by both members of a couple.

We invite you to join our session to find out more about the process and impact of the Indashyikirwa program. We will be sharing the impact and interaction of other critical program elements including the women’s safe spaces and engagement of opinion leaders. Quantitative findings about the direction and strength of associations between socio-economic status and IPV will also be discussed.

This article first appeared on The SEEP blog and is reproduced with permission.