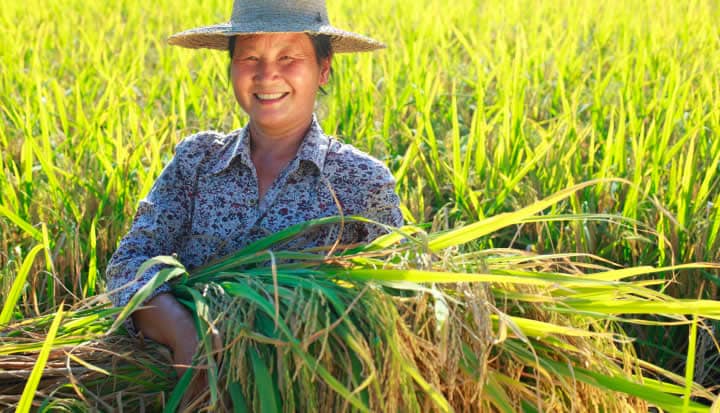 
There’s already enough food in the world for everyone, but one person in eight goes hungry every night, and 2.3 million children die needlessly each year from malnutrition. What can be done about it? A report published by the Hunger Alliance suggests investing more in small-scale women farmers would be a good start.

Three quarters of the world’s hungry and malnourished people are farmers in developing countries who rely on whatever they can grow on their small plots of land, usually two hectares or less. In most cases, it isn’t enough for their families to be well fed and healthy. Improving the productivity of these small-scale farmers would directly address most of the world’s hunger and malnutrition, as they are responsible for 80% of the food supply in developing countries.

But for maximum impact, we need to be even more specific and focus on women farmers in particular. This is because women are disproportionately marginalised in agriculture: they account for some 60% to 80% of food production in developing countries, and yet only 5% of government agricultural services, such as training in agriculture techniques and livestock vaccination programmes, ever reach women farmers.

If all women farmers were given better training and access to inputs such as good seeds, fertilisers and vaccinations, their yields would increase. Greater yields are helpful for all farmers, but the impact of increasing women’s agricultural yields is particularly strong because ending hunger and malnutrition isn’t solely about how much food is produced: it’s also about how any extra food and income is then used.

Where women’s yields and incomes are improved, the effect on hunger and malnutrition is greater because women are more likely to use household incomes and food supplies to care for children and feed them. Research by the World Bank has shown that women are consistently more likely than men to invest in their children’s health, nutrition, and education. It is therefore women’s productivity in particular that translates into better health and nutrition for poor people as a whole.

One way of making this happen is to help women make better use of the resources available to them. Women don’t always have equal access to the land used by men, but they do tend to control smaller areas such as gardens, field edges, roofs and ponds. This land can be put to good use in growing vegetables and fruits, and raising small livestock such as chickens or fish. Controlled by women, the extra food and income produced this way is likely to mean less hunger and better nutrition for them and their families. In fact, one review of the impact of home gardens found that they improved nutrition in 11 out of 13 cases.

The home garden programmes that improved nutrition were typically those that combined agriculture with other interventions, such as education in nutrition. Recent work by CARE International in Bangladesh has backed this up.

SHOUHARDO (Strengthening Household Ability to Respond to Development Opportunities) was a $126m programme in Bangladesh which launched in 2006 to improve nutrition through a package of services and education aimed at women. It went beyond direct nutrition interventions to include training in home gardens, maternal health, immunisation and financial services, as well as the formation of women’s groups to identify solutions to the problems faced by women such as violence, early marriage and lack of education.

The impact of this co-ordinated assault on malnutrition was impressive: in February 2006, 56.1% of children in the target population were stunted. By November 2009, only 40.4% were. The stunting rate within the target population had fallen by almost 16 percentage points in less than 4 years. Agricultural productivity through women’s home gardens was an important part of that, but combining it with other forms of intervention in women’s training, education and confidence magnified the impact on nutrition.

Programmes such as SHOUHARDO show that if we want to reduce hunger and malnutrition, the greatest gains are to be found with relatively modest investment in small-scale women farmers. It is there that we find the most untapped potential.

In January this year, for example, I met Purida, a Bangladeshi woman who had lived in the same village for 15 years but until recently had never grown food in an organised way. Given seeds and training, she had spent two weeks last year preparing a small plot of land to grow red amaranth, beans and onions. With that modest intervention, she grew enough to meet her own needs and earned 1,000Tk (£8) from her vegetable surplus. This year, she’s been even more organised and expects to earn 15,000Tk (£120). As a woman and carer, Purida’s new income is likely to translate into better health and nutrition for her and her family.

As G8 leaders gather at a ‘Hunger Summit’ in June alongside the G8 summit, the Hunger Alliance report is calling for the UK government to commit to investing an additional £425 million per year in small-scale agriculture, representing its share of what is needed to fill the gap in poor countries' agricultural funding. Investment in small-scale farmers is the only realistic way we can achieve the UN Secretary General’s Zero Hunger Challenge of eradicating hunger by 2025. We know it works: what we need is the political will to make it happen.