The Coffee Price Crisis: How to Support More Sustainable Livelihoods for Farmers 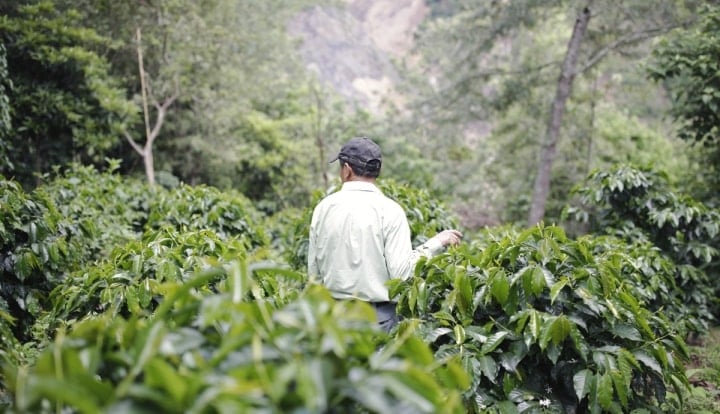 Image: A farmer inspects his coffee farm in Guatemala (TechnoServe)​

The global coffee price crisis has drawn headlines around the world. But rather than view it as an isolated phenomenon, we must view at as part of a larger set of challenges affecting coffee farmers. To truly change the outlook for the world’s 12 million coffee-farming families, we must address these longstanding issues.

CHALLENGE: What roles should business and others play in enabling farmers to improve their incomes?
Tuesday October 22 2019


The world is starting to wake up to the difficulties facing coffee farmers. As global prices hover near historic lows, the media has shared stories of coffee growers struggling to keep their farms afloat or abandoning their crops to seek other sources of income. Governments, international organizations, private companies, and nonprofits have made public calls to address the price issue and its effects.

At TechnoServe, where we work in coffee-farming communities in 14 countries across Latin America and Africa, we see the effects of the price crisis on the ground every day. The impact falls most heavily on smallholders, who, according to Enveritas, make up 96 percent of the families who tend to the world’s 12.5 million coffee farms.

But as significant as the current price crisis is, we shouldn’t think of it as a new, or isolated, phenomenon. Rather, today’s low prices are magnifying a series of long-term challenges that have kept most coffee farmers trapped in poverty.

We can’t create lasting change in the livelihoods of coffee farmers without addressing those challenges.

The changing math for coffee farmers

For the past year, the benchmark commodity price of coffee has been around $1 per pound--half of what it was as recently as 2014. The low prices are driven by increased production in Brazil and Vietnam, which account for more than half of all coffee exports, and the weakness of the Brazilian currency, leading to a surplus in supply.

If you examine the past 30 years of coffee prices, however, the current price trough doesn’t look like an aberration. Rather, the graph looks like a series of waves, with periods of high prices followed by those of low prices, in a pattern common to commodities. Generations of coffee farmers were able to support their families while navigating these waves. When prices were high, they took their extra earnings and reinvested them to improve the productivity or quality of their coffee, develop alternative revenue sources, or put money into savings, and this allowed them to ride out the times of low prices. 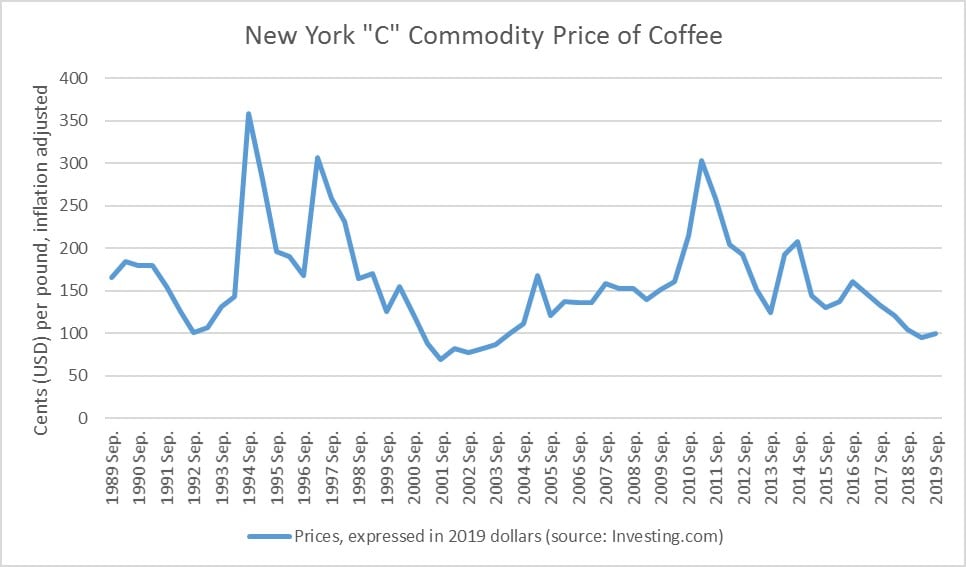 Today’s coffee farmers don’t have that luxury. Even when prices are good, they’re barely scraping by. And when prices are low--as they are today--they run the risk of being ruined. What changed?

To begin with, farms got smaller. As the rural population has grown, successive generations have subdivided agricultural land. According to government statistics, the average farm in Uganda was four hectares in size in 1965; by 1990, it was two hectares; and today, it stands at just a single hectare. As farms shrunk, farmers earned less, and they found themselves trapped in a cycle of poverty. With less income, coffee growers were unable to reinvest in their farms--for example, by replacing old, unproductive trees and planting new, high-yielding ones--which led to further reductions in production and sales. Meanwhile, farmers also had less land to grow other crops, which made them more dependent on their shrinking coffee income. It’s little wonder, then, that a full 80 percent of the women and men tending the world’s coffee farms live on less than $2 per day.

There’s every reason to believe that coffee prices will rebound in a few years. But even when they do, most coffee farmers will still face lasting challenges and poverty. If we want to really change the long-term prospects of coffee farmers, we need to flip the cycle of poverty into one of prosperity.

What would that look like? We can’t make farms larger in the near term, but increases in quality and farm productivity, and improvements in the value chain that allow farmers to earn a larger share of the export price, would boost farmers’ earnings. Coffee growers could reinvest in their farms and livelihoods, and those investments would, in turn, boost earnings even more, allowing further investment. 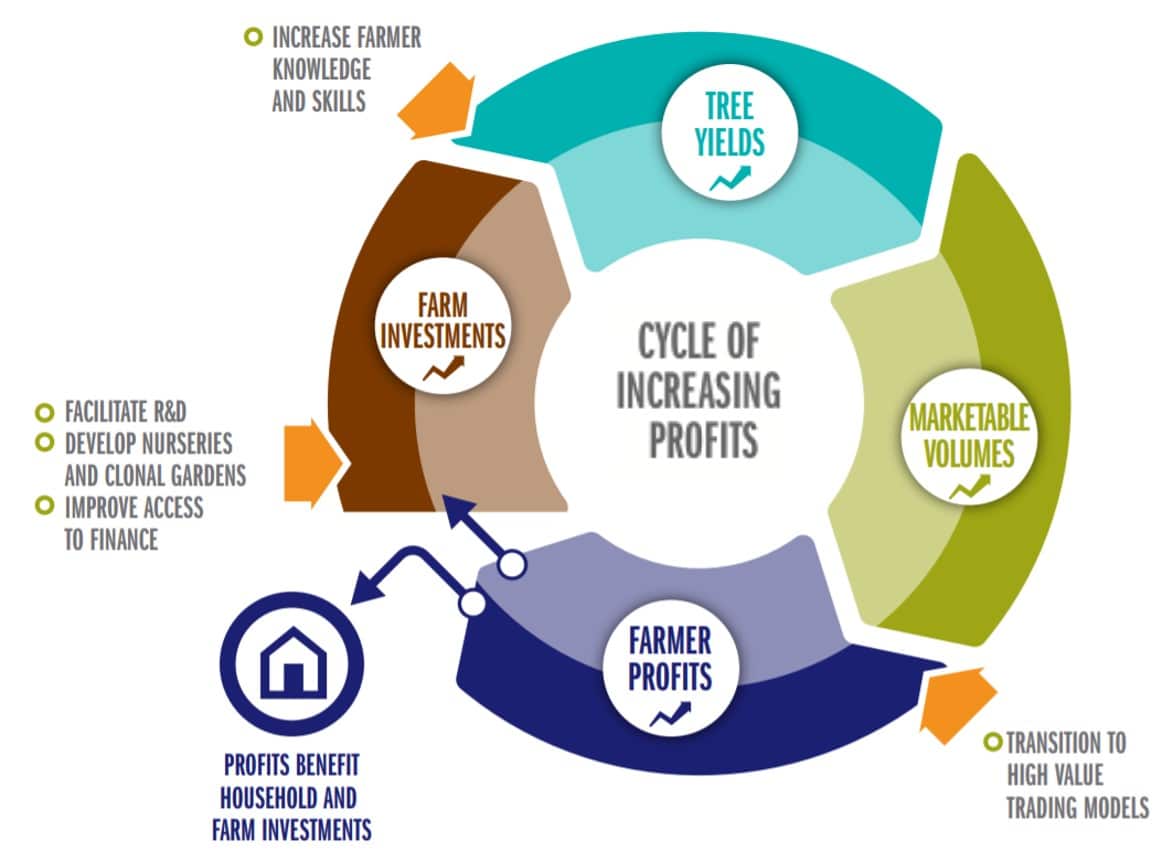 We also have to look beyond the coffee value chain and identify non-farming livelihoods. To keep coffee farms from being further subdivided, many children of current coffee farmers will need to pursue other economic opportunities. Education is an important part of the equation, and increasing coffee profits allows parents to provide their children with the schooling necessary to find non-farm employment. Supporting alternative livelihoods will help current coffee farmers reduce their risk, provide a new generation with more diverse economic opportunities, and allow coffee farms to become larger and more profitable in the future.

So what can the private sector, governments, international donors, and civil society do to help change the prospects of coffee farmers? In a series of articles over the next month, we will be sharing specific solutions drawn from TechnoServe’s work. We’ll look at ways to improve quality and meet the growing demand for specialty coffee; examine regenerative-agriculture approaches to improving farm productivity, as well as methods for developing alternative income sources; and identify practices that improve the efficiency and transparency of value chains, so farmers can earn a higher share of the export price.

None of these changes are easy, and farmers can’t just make them on their own. But if we care about the future of coffee, and the women and men who grow it, the international community needs to step up and make smart investments. That way, we can set farms on a path to not only ride out the tough times like today, but to grow in the future.