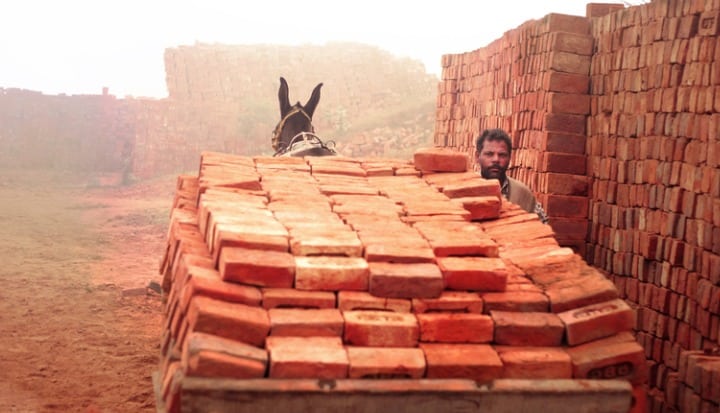 Modern slavery is often invisible, hidden in factories, small farms, plantations, or single-operator boats supplying seafood. A consumer goods company may be many tiers away from workers in these settings. This makes modern slavery very challenging to detect – and even harder to eradicate – in these and other parts of global supply chains.


Recruitment-fee debt bondage is the most widespread expression of modern slavery. In many parts of the world, it is common for the costs of recruitment to be borne by the workers themselves. Other costs – for example, travel, visas and medical expenses – compound the problem. Workers go into debt to pay these up-front fees and costs, then find they can pay only the interest on the debt from their wages, with the debt tying them permanently to a role over which they have no control.

Using blockchain to ensure the integrity of workers’ contracts

Companies using mobile applications to hear directly from workers about their experiences can help to uncover hidden, illicit practices. Another approach is to apply technology directly to bring greater transparency into recruitment systems.

Blockchain applications work best when they are used to answer the question: “Is the data you’re looking at the same as the data I’m looking at?” They ensure there is no manipulation in the transfer of data, creating transparency and resolving problems of fraud or other forms of abuse based on unauthorised changes in data.

For example, Diginex is a global blockchain solutions provider tackling issues that require considerable collaboration to deliver social impact. It is working with the International Organization for Migration and The Mekong Club on ethical recruitment of migrant workers, developing the eMin tool to ensure the transparency of workers’ contracts.

Such transparency is crucial for migrant workers, who often sign a contract in their country of origin but may then find that contract has been changed by the time they arrive in a new, unfamiliar destination and begin work there. Diginex’s approach enables an immutable copy of employment contracts and related data to be stored with the highest level of security on the Ethereum blockchain. Using a simple mobile screenshot, Diginex’s tools enable the contract to be uploaded to a secure online data warehouse. The worker is given a hash – a unique code granting them access to their original contract from anywhere. This strengthens transparency through giving workers access to their own contracts and gives workers a robust basis for claiming the rights and benefits they were originally offered at the time of recruitment.

The eMin tool has been successfully piloted since February 2019 at a shrimp farm in Phuket, Thailand, in partnership with Verifik8, a data intelligence and analytics provider for agribusiness suppliers. Following the pilot, Verifik8 will integrate eMin into its existing farming monitoring tools, called Blue 8/Green 8, which are already being used by 5,000 workers on farms in Thailand. Further expansion is planned into different sectors in Southeast Asia, Bangladesh and Bahrain.

The auditing community is interested in these approaches, with plans to trial a system with auditors early in 2020. This would, for example, enable auditors to investigate whether all the terms and benefits promised in a contract are being implemented in practice. The Mekong Club has also been applying another kind of technology to help strengthen worker voice within social audit processes.

Working with the United Nations University Institute in Macau, the organisation sought to apply mobile technology to overcome weaknesses in the traditional approach to interviewing workers for social audits. These flaws are often driven by time constraints during factory visits (with each interview typically taking 10 to 15 minutes) and compounded by a lack of privacy for interviews. Language barriers are common, particularly when migrant workers are being interviewed, and auditors may select workers for interviews based on their language.

Apprise Audit is a mobile app for auditors designed to overcome these concerns. It offers a standard set of questions available in audio in multiple languages – which allows for a more inclusive selection process – with workers’ responses captured on the auditor’s phone screen. It offers the auditor a real-time summary during the audit.

Apprise Audit has been tested by four major corporations in their supply chains for five months. A recent evaluation showed that the app enhances workers’ voice, in part through enabling greater confidentiality of responses (through the use of headphones), with the gamification of the on-screen response process putting workers, and particularly women and migrant workers, more at ease in giving feedback on their working conditions, compared with when talking directly to an auditor. The standardised questions and links with a content management system enable efficient and consistent data collection and retention and support analysis of factories’ working conditions over time.

Technologies that enable transparency may be fundamental to tackling systemic opacity in recruitment and contracting systems. Lack of transparency in these systems contributes to modern slavery and makes it difficult to root out. These are areas in which blockchain-enabled tools may enhance trust, transparency and security by storing an immutable copy of workers’ contracts and employment terms.

Strengthening auditors’ engagement with workers through technology is improving the quality of social audit data, increasing the inclusion of marginalised workers’ voices and making the auditing process more efficient. These are both strong examples of the application of technology to tackling modern slavery. Further work is needed to deploy these solutions at scale in complex, interconnected global supply chains.