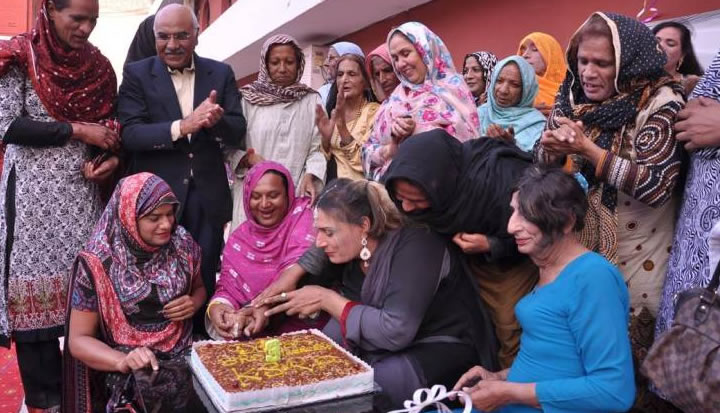 
Following a trip to Pakistan, Dr Ajaz Ahmed Khan tells us about a very interesting project implemented by our MFI partner AKHUWAT.

Transgender people, or khwaja siras as they are often referred to in Pakistan, routinely face a high level of discrimination in access to health, housing, education and employment as well as ridicule, intimidation and the threat of physical violence. Most khwaja siras are forced to live at the margins of society and earn an income by dancing at ceremonies such as weddings and births, and most commonly from begging. It’s not a dignified existence, but one that is all too often the only choice for those denied

In an almost unprecedented example of positive discrimination Dr Amjad Saqib, the founder and executive director of Akhuwat, Lendwithcare’s partner in Pakistan, decided when he established a clothes bank in May of last year to only employ khwaja siras to sort, repair, clean and pack the clothes. Such regular employment opportunities are almost unheard of for transgender persons. Akhuwat now employs six full-time khwaja siras, namely Naghma, Naina, Guriya, Faisal, Moshin Deedar and Guru Taj, in the clothes bank which is based in Akhuwat’s head office in Lahore.

Although primarily an organisation that provides interest-free loans to low income people to develop their businesses, Akhuwat has in recent years initiated a number of other programmes to improve poor people’s general well-being. For example, it established a health centre that specialises in promoting better maternal health and raising awareness of providing treatment for diabetes. It launched the clothes bank in order to provide good quality clothing and other items free to poor people who cannot afford to buy them. The clothes bank accepts lightly used and almost new items such as clothing, shoes, school satchels, handbags, towels and bed sheets from the general public. If required, it then repairs the items before washing and pressing them and packing them into clear plastic bags and distributing them free of charge to poor people. A typical family pack contains one outfit each for one man, one woman and child. However, there are also more formal, and often quite expensive, clothes such as suits and wedding dresses with elaborate stitching and beading. The suits can be requested when someone has a job interview or other occasion when they have to dress smartly. The wedding dresses are requested some weeks in advance by prospective brides and grooms. The clothes are distributed by each of Akhuwat’s 343 branches benefiting an estimated thirty thousand people each month.

Although the whole operation is overseen by Bilal Azam, the day-to-day work of sorting the clothes that arrive in large cardboard boxes, repairing, cleaning and packing the items is undertaken by six full-time staff, all of them transgender persons. The story of one of the khwaja siras, Naina who is 36, is typical. Beginning when she was still a child, Naina earned money by dancing at weddings and other celebrations but as she became older the opportunities became fewer and she had resorted to begging for one year before joining Akhuwat. Now Naina is the main seamstress repairing any clothing that is slightly damaged and earns a regular income working from 9 am to 3 pm five days a week at the clothes bank. Naina takes great pride in her work and confides that as well as providing her with greater economic security and increasing her dignity and respect, she feels that she is helping other disadvantaged people to improve their lives as well.

This blog was previously published on Lendwithcare.org, and is reproduced with permission.