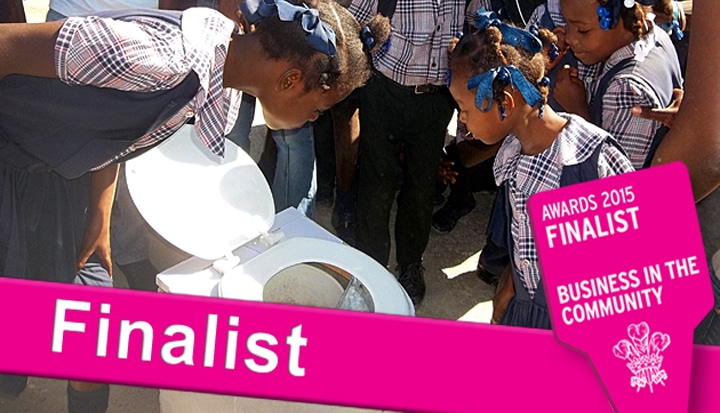 SOIL is a social business that has developed a financially sustainable sanitation service which eliminates the need for waterborne sewage systems.

Access to improved sanitation remains one of the most under-realised targets of the Millennium Development Goals, with 2.5 billion people, 36% of the global population, still lacking access to a toilet. Waterborne disease resulting from this is one of the leading causes of death in children across the world.

A lack of waste treatment in many sanitation systems means that the majority of human waste around the world is dumped untreated directly into waterways, or left in underground reservoirs that often leach into groundwater.

Along with poor sanitation, environmental degradation is a serious issue in Haiti, where soil fertility has been declining precipitously and over 98% of the mountainsides have been deforested.

SOIL provides composting toilets to people in Haiti’s most impoverished urban neighbourhoods, and produces a supply of safe, agricultural-grade compost through treating the waste.

The toilets help to reduce the incidence of waterborne disease and create new entrepreneurship opportunities in the sanitation sector.

Customers in Haiti rent a SOIL EkoLakay toilet for a monthly fee of around $5 USD per household. SOIL sanitation workers visit each household weekly to collect the toilet waste and deliver a fresh supply of carbon material, used for “flushing” composting toilets.

The collected toilet wastes are then transported on a waste collection vehicle (also known as the “Poopmobile”) to the SOIL composting waste treatment facility where it is safely composted into rich, agricultural-grade compost. This compost is then sold for agricultural application.

SOIL has sold over 75,000 gallons of rich, organic compost for agricultural and reforestation efforts across the country.

SOIL covers its costs with monthly toilet user fees, waste treatment fees and sales of compost. This simple, globally-replicable business model also demonstrates to the private sector the potential to provide affordable sanitation services in the world’s most impoverished and water-scarce communities.

"SOIL’s work is unique in that it is one of the largest and most promising tests of the paradigm-shifting hypothesis that sanitation no longer needs to focus on waste disposal, but rather on the economically-profitable nutrient capture and agricultural reuse of human waste. SOIL’s model is one of the few interventions around the world that has showed early success in creating a financially-sustainable sanitation service that eliminates the need for waterborne sewage systems and produces an endless supply of safe, agricultural-grade compost to increase soil water retention and improve food security." - Dr Sasha Kramer, Executive Director, SOIL