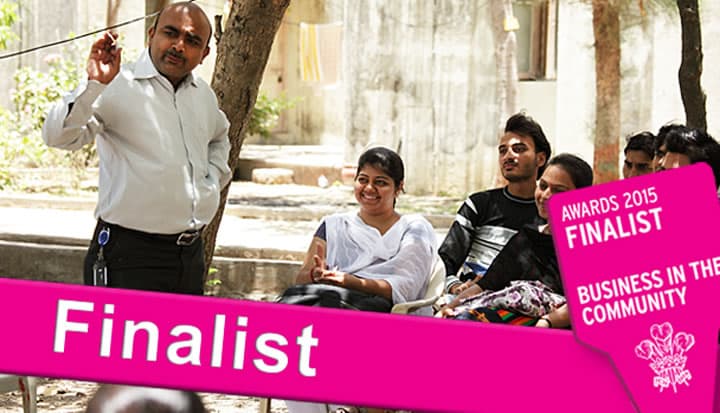 The majority of those taking part in the Jammu & Kashmir-focused Udaan programme secured employment at TCS (292 of the 325 trained between 2012 and 2014).

TCS Affirmative Action Employment Training addresses exclusion on the basis of poverty, gender and the legacy of India’s caste system, and makes the IT industry accessible to people from these marginalised groups.

Employment opportunities in India's burgeoning IT sector often bypass the country’s most marginalised communities and castes, who are excluded from the employment culture of corporate India. As consequence of the caste system, nearly of quarter of India’s population are defined as Scheduled Caste/Scheduled Tribes (SC/ST) communities. For centuries these communities have been shunned or have lived in remote communities; most continue to live in poverty despite India’s economic growth. For communities living in conflict-affected areas or away from India’s economic powerhouses this gulf is even wider, with young women especially disenfranchised by cultural barriers.

TCS Affirmative Action Employment Training was set up in 2010 to help marginalised youth gain the skills needed for employment in the Information Technology Enabled Service, (IT/ITES ) careers. The training is aimed at the SC/ST community and others who are excluded from mainstream society, including women and those from conflict-affected areas.

In 2012, an intensive training programme, Udaan, was added to address lack of opportunity in the state of Jammu & Kashmir, which has the highest level of youth unemployment in India.

To address gender and social inequality, particular focus was placed on developing training for all female or all SC/ST training cohorts and helping them adjust to a metropolitan/corporate environment. For example, the Udaan programme included an all-female intake of students whose initial orientation was conducted in a single-sex environment for the first three weeks to build confidence before integration with the wider pool of students.

Around 42,000 people have been trained, with many securing jobs at TCS after the programme. A key objective for TCS is to access hidden pools of talent, so all trainees are encouraged to apply for jobs at TCS. Those not successful or who do not apply are nevertheless better equipped to compete for jobs in the IT industry. Informal follow-ups suggest that former trainees have a high success rate.

"We take many things for granted and it is important to give back to society many times over. We cannot work through compliance; we must work through compassion and commitment. We have a long way ahead but the momentum should continue." - Cyrus Mistry, Chairman, Tata Sons