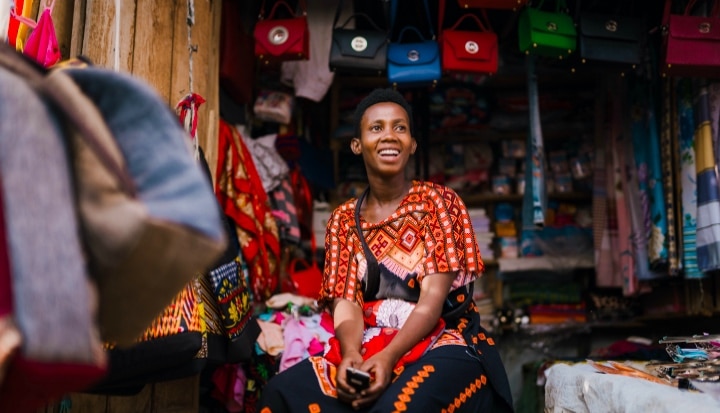 On Monday, World Refugee Day marked the start of Refugee Week (20-26th June) – a UK-wide festival celebrating the contributions, creativity and resilience of refugees and people seeking sanctuary. Read on to learn more about a partnership between Comic Relief and Jersey Overseas Aid which has helped support some of the two billion people who lack access to formal financial services.

That sense of creativity and resilience has been embodied by thousands of people living in Zambia, Rwanda and Sierra Leone, who have benefitted from a joint programme – Branching Out: Financial Inclusion – over the last five years.

Funded by a Comic Relief and Jersey Overseas Aid (JOA) partnership, the programme has helped support some of the two billion people who lack access to formal financial services; approximately 90% of whom live in developing countries.

Promoting financial inclusion has helped thousands access things like bank accounts, savings, insurance and credit, and provided low-income households with the means to plan for everything from long-term goals to unexpected emergencies.

As well as strengthening community development and gender empowerment, the partnership has worked closely with organisations like the United Nations Capital Development Fund (UNCDF), who are supporting refugees in places like Mahama Refugee Camp, the largest refugee camp in Rwanda, to have greater agency over their lives.

The UNCDF has helped establish savings groups in Mahama that allow groups of people to save together and take small loans out, which are proving vital in helping refugees establish more stability, rebuild their lives, and develop their business, saving and investment skills. As well as improving financial inclusion, the project ultimately works towards reducing poverty and supporting local economic development.

The project has a particular focus on working with women and young people, including women like Niyonsenga, a businesswoman living in Mahama with her husband and their three children who shares her story:

“I married a Burundian refugee who first lived in Kigali, but life was difficult for us, and the time came when all refugees were required to move to the camp. So, my husband had to move here to Mahama refugee camp and that’s how I came here, and life goes on.

“I sell clothes, especially for babies such as baby clothes, baby grows and other items related to women like women’s handbags, school bags, and bed covers,” she explains. “We had started out in the food business, and later we found that the food business is not going well. I had already gone bankrupt. I told my husband that we have to change, so I talked to him to see if we can change to the baby clothing business.”

“So came the plan to help us do our business better. We started with Umutanguha Finance Company Ltd (UFC), and I continued to work, earning the profits, and depositing in the UFC, and then we became active clients until we applied for a loan”, Niyonsenga explains, when describing the UFC, who work within Mahama via the UNCDF.

“When I reached out to the Bank Manager, I was offered a loan because they had previously trained us on Business Management, and they told us that the loan was given to us so we can expand our business.

“Today, if you look at our investment, you will see that the profit is really there. Now I am done with paying back the loan and all these products are mine.

“Now that I've talked to my husband, we think we're going to get a loan again and continue to expand our business. My goal is to make it easier for the average customer to find what they need. That is my goal. I want to bring exactly what customers need.

The biggest source of Niyonsenga’s joy is her family’s health and happiness. And that’s possible thanks to her work as a businesswoman. She says:

“Even though life is difficult in the camp, life goes on. My children are well off, the little ones are in at early childhood development level and now the only older one is in primary school and the administration is helping us so that our children get free education.

“What I am happy about is that life has changed, and my children have changed too. Before I started my business, I couldn’t afford to buy milk for all my children. Before I started, I used to say that I would buy milk only for the small one, but now they all get the right food” she adds.

She also believes more women should put themselves in positions traditionally taken by men:

“Obstacles prevent women in the camp from progressing. So, this is something that I see as a challenge that a woman often has. A woman who minimises her potential, a woman who is afraid of saying that I can't do these things as men do – that I can't go into business because I am a woman, and my job is raising children and staying with children – that’s the poor mindset that affects women in general. So, I came to the conclusion that this should not be the case for me. The first thing I saw in myself was the courage to say that what can a man do, I can also do. So, I came up with ideas and now, I am progressing.”

Comic Relief and JOA’s partnership has helped support eight organisations through 19 different grants in Zambia, Rwanda and Sierra Leone toward establishing financial inclusion. Since 2018, the investments have helped 11,018 people, including 2,000 refugees, increase their savings and create greater stability in their lives. The partnership has also created savings groups to support over 124,00 people with the means to save and borrow money, and begin planning for the future.