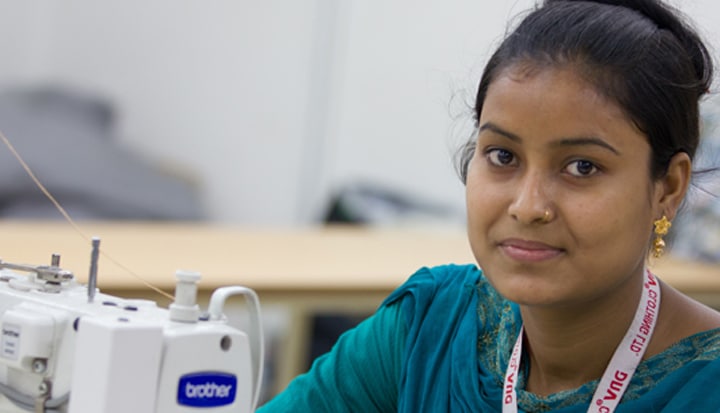 
"My father was sick and I had to support the family. I have a younger brother and sister who go to school."

When Rupa’s father fell ill, she found she had to earn an income to support the family to supplement the income earned from her father’s small farm. She had to help pay for her siblings’ school fees.

“My main aim is to support a growing family; once they have studied, I’ll decide my future.”

Rupa, a 22 year old woman, who comes from a poor farming region of Bangladesh, works at Ananta Apparels. Her first job was number matching the garments; now she has been promoted to sewing operator. She is happy in her job and sees a long-term future at Ananta Apparels where she would like to be a supervisor one day.

Women, according to a recent World Bank report, account for 80 per cent of the 3.6 million workers in Bangladesh’s thriving garment industry. Jobs for women have, in turn, led to growing female schooling, better human development outcomes, and faster poverty reduction. Still, over 40 per cent of the population live on $1 a day and political instability continues to be an obstacle to development. Nevertheless, the rate of poverty is decreasing and the growth rate has been a consistent 6 per cent a year. The economy has expanded significantly in the last decade.

Ananta Apparels Ltd, a garment exporter specialising in denims and trousers, started as a family business in 1992. In the 1990s, there used to be 19 lines of clothing producing 400,000 pieces a month. Today it has grown immensely, with 80 lines and 1.8 million pieces a month.

Although Ananta Apparels has been successful, many businesses in developing countries, particularly those in politically unstable climates like Bangladesh, struggle to find the investment they need to grow. CDC is the UK’s development finance institution and it supports the building of businesses throughout South Asia and Africa, creating jobs and making a lasting difference to people’s lives in some of the world’s poorest places. Investing in more risky climates is one of CDC’s key contributions. Working with local fund manager, Brummer and Partners, CDC first invested nearly US $1m in Ananta Apparels in 2011 through the Frontier Fund, the first private equity fund set up in Bangladesh.

"By investing in the first private equity fund in Bangladesh, CDC sets a precedent. CDC not only brings in capital but it also has a long-term approach. It’s a frontier market that has inherent risk but it’s coupled with high rewards."

On-site healh care facilities
for the workers of Ananta
Apparels

“It is important that financial return goes together with development impact and creating jobs.”

CDC Businesses such as Ananta Apparels reflect business success and development impact. It creates employment and an income to thousands of people. Thanks, in part, to the continued support of CDC and Brummer and Partners, Ananta Apparels is now expanding significantly and provides direct employment to 17,000 people. It has recently opened a new suit factory as well as a button and sweater factory. There are plans to open more factories and by 2015, around 31,000 people will be employed. An expanding business means more jobs for women like Rupa who have to help support and educate their families. Additionally, Ananta Apparels provides safe working conditions for its workers. Here workers welfare is important, and there are on-site healthcare facilities with nurses who attend to the mostly female workforce.