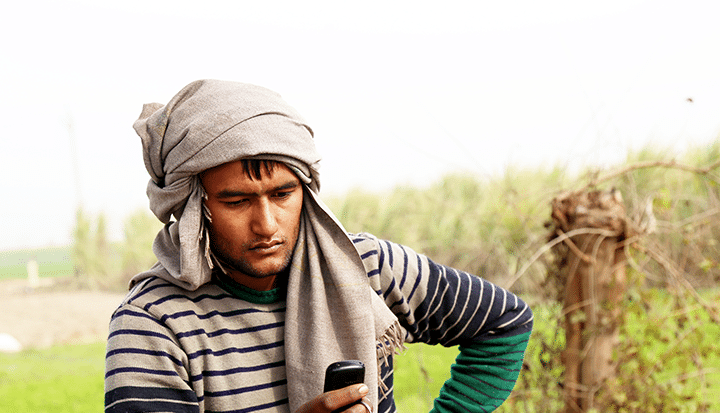 Q: Tegan, you are the Business Intelligence Manager at the mAgri program at GSMA. What does the mAgri program do? A: We catalyze scalable, commercial mobile services that improve the productivity and incomes of smallholder farmers and benefit the agriculture sector in emerging markets. We bring together our members (mobile...

A: We catalyze scalable, commercial mobile services that improve the productivity and incomes of smallholder farmers and benefit the agriculture sector in emerging markets. We bring together our members (mobile network operators), agricultural organizations and the development community.

A: The operators had a variety of incentives. Mobile technology has been a game changer in the developing world in terms of reaching people who had never had access to IT services before. But lot of the uptake has been in cities. There’s still a big divide in mobile use between urban and rural areas. Operators see this as the next big challenge: how do you break into that market, where there’s often a very stark difference in the way people live compared to urban areas? At the most fundamental level, that was the draw.

Q: How did mAgri help these operators innovate?

A: We created a Challenge Fund (under the mNutrition initiative funded by UK Aid from the UK Department for International Development) and offered grants to operators interested in creating solutions for rural areas. We provided funding for user experience design research as well as in-kind support like business intelligence analysis and monitoring and evaluation. We worked together for a period of three years. The goal was to create a product that appealed to rural people by talking to them and figuring out what they need. We were on an exploratory mission, working with operators directly and employing the user experience driven approach. These six products have now reached more than five million users worldwide.

When our user experience designers went out into the field to identify the most pressing problems that mobile could solve, in six out of six cases, they found that information was a key gap. Value-added services (or VAS) like information and content were also the quickest wins that came up, compared to other opportunities that are more complex to capture – like payments and other ways of digitizing agricultural value chains – which we’ll be moving onto now.

Q: What kind of process did the operators go through to get these value-added services developed, tested, launched, and scaled up?

To start, we hired a global consultant, Frog Design, to go in and support a five-week process of user research in the field in each of the six countries. Someone from the GSMA and someone from the operator product team – or in some cases the entire product team – participated in the research. In a few cases, local user experience designers also came in. These teams came back with lots of suggestions about what would be the most impactful and scalable product.

Then it took a few months to build the product. Sometimes this happened in-house, and sometimes it was outsourced. Six to 12 months after the initial research, the operators were typically ready to launch, and we carried on monitoring their progress.

It was key to our proposition that the launch shouldn’t be the end of the engagement. Often, these operators will build something, put it out there, and if it doesn’t meet its objectives, it stagnates or gets culled after a short period. That’s why we were so keen to support data-driven services this time. We worked with operators to ensure they gave the products a bit more of a chance, taking it out in the field to test with users, looking at users’ actual behavior by analyzing the data that the services generate. Are there certain places where people are having problems? Are these services generating loyal customers or one-off users? The GSMA mAgri program’s approach is to tie all that together once a quarter with a product iteration workshop where we line up all this data along the customer journey to understand what the issues are, and what can be done to improve the product. Then we watch the new versions go out into the world and monitor them again.

For example, we worked with Dialog Sri Lanka to create their Govi Mithuru service. In June 2016, they had only 10,000 users – we found that two thirds of those who dialed in to register didn’t become users. After some testing, the process was refined down from four steps to one, using a less manual approach to identify certain aspects (like location) and delaying other data gathering until after registration. Within 6 months, the service has grown to over 250,000 users, maintaining a very high engagement rate. Another thing we really liked about that service was that it fulfilled a real need – farmers and farming experts in Sri Lanka reported an over-dependence on chemicals in their agricultural sector, and Govi Mithuru customers were more likely to decrease their use of these inputs than non-users.

Certain operators already had an iterative process in place, or there was a possibility for it – with internal user experience teams available to help. With others, this was a much newer approach, and it would not have occurred without our intervention.

Q: What kinds of objectives did the operators set for these new services?

A: Generally, we’ve seen that VAS are expected to generate a certain amount of direct revenue. We’ve tried to help operators see how VAS are generating revenue more indirectly, for example by reducing churn or acquiring new users. In our work with this specific set of six companies, we did have a couple where the objective was to acquire new rural users. Rural is a new frontier for some of them. Some saw these services as a springboard into further services for agriculture – the beginnings of a bigger platform.

Q: Were operators’ efforts more intrapreneurially driven or more institutionally driven? Did it seem to matter?

A: We worked with some very driven product managers who came from backgrounds where they had seen the problems endemic in rural areas, and saw the partnership with us as an opportunity to address them. We also worked with people within CSR departments or “innovation departments” where there is a social or impact focus.

It’s hard to tell where the impetus originally came from, but I can say that we had the most success overall in places where there was an institutional objective to do this piece of work to understand rural markets better. In one case, Telenor Pakistan, the CEO signed off on a new business vertical for agriculture which had a bit more freedom within the organization to innovate and a longer time to meet the KPIs that a product would usually need to meet. Of the six operators we worked with, Telenor Pakistan has been the biggest success story so far – reaching 3.7 million people, adding different applications to the platform. Average revenue is 3.5% higher for Telenor Pakistan’s agri VAS users than for others and churn is 1.3 percentage points lower. Interestingly, two thirds of power users – active, repeat users – are below the poverty line, compared to 20% of the population at large. Power users are much more likely than non-users to report changing their planting and post-harvest behavior, and increasing their incomes.

Q: What other key success factors did you pick up?

A: Another thing we thought was important was the extent to which the design process was owned by the product team. The initiatives that were not supported by the higher echelons of the organization, or that outsourced design to third parties, had the least impact over the two-year period in which we monitored and evaluated their results.

The extent to which the operators used customer feedback and behavioral data to improve their services seemed to be a good indicator of how well they scaled.

Finally, there were important contextual factors. Some of the markets we’re looking at are much more developed than others. For example, Sri Lanka has high literacy rates and well-established VAS markets, so it is understood that the user would pay for those kinds of services. There weren’t any problems charging small fees, where the operators thought that was necessary. People expect that. In Malawi, mobile penetration is much lower in general, the country is much more impoverished on many metrics, and VAS are not so prevalent. There was an early uptick in terms of people interested in using information services and Airtel’s M’chikumbe product has done very well, but it’s probably fair to say that its sustainability is more of a question. However, considering the end-user platform as a value add for businesses, who would pay for example to send advertising or other relevant content, is looking to be more sustainable than charging the customers.

Q: What’s next for mAgri and its work to support corporate social innovation?

We are now working with three mobile network operators on research to understand the possibilities for creating partnerships between operators and agribusinesses. We’ll be supporting mobile network operators to research and create products which digitize agricultural value chains. The immediate focus is on formal value chains and in particular the relationship between large agribusinesses and their smallholder farmer suppliers. Our aim is the same, to catalyze services which improve the lives of smallholders – but we are now bringing some more complicated elements in. Information is a need, but this could also include payments, track and trace, analytics, farm management. Most importantly for the smallholder, we hypothesize that such services could be that starting point for a digital identity, leading to improved prospects for financial inclusion. Let’s see what the possibilities are!

Editor's Note: GSMA’s mAgri program has published a series of reports about this work, which can be found here on its website.
Previous postNext post