Sowing the Seeds for Growth in Colombia 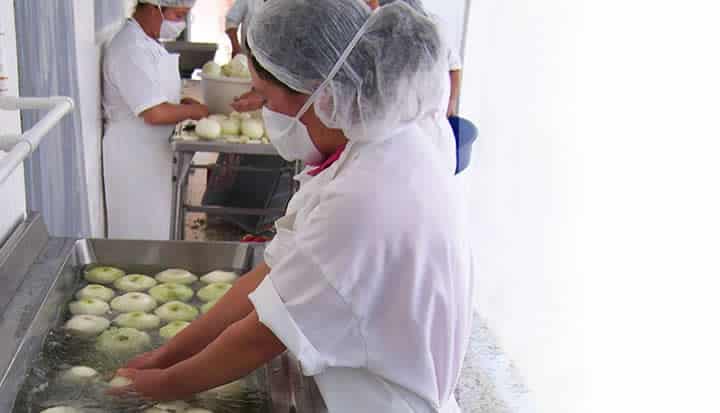 Sowing the Seeds for Growth in Colombia


Laura Patiño, the visionary behind Picados San Juan, with modest rural roots in La Unión, Colombia is helping generate growth and stable employment in a region once overrun by contraband trade.

Laura returned to La Unión following a scholarship-funded degree in Agricultural Sciences and Production with a clear aim; “to generate development, create employment” and to bring about enhanced quality of life in the Oriente-Antioqueño region. Having completed her degree, Laura turned down a fully-funded masters´ to return to her community in La Unión, determined to start using the skills and knowledge she had learnt to make a local difference.

Without start-up resources, the whole community had to pitch in to get the fledgling family fruit and vegetables processing business up and running. In the early stages, locals called the company “todo prestado” or “everything borrowed” as all tools, from cutting utensils to tables were borrowed from family, friends and neighbours.

Funding through Fundación Bavaria, the foundation of SABMiller’s subsidiary Bavaria, allowed Laura´s vision to come to fruition, helping the business to grow, generating incomes and contributing to enhanced well-being across the region. The business supplies caterers from restaurants to hospitals with fresh fruit and vegetables ready for consumption and selected, prepared and cut to the requirement of each client.

Bavaria´s annual Destapa Futuro entrepreneurship prize, awarded to Laura in 2011, is she says, “an important first step which is empowering companies in their work with agricultural communities and helping them form alliances with traditional small-scale farmers.”

For Laura and her younger brother, Ricardo, with whom she runs the business, it certainly has been a transformative first step. From having one client and using equipment borrowed from the community, the business now employs around ten local farmers and generates income for over 30 local small and micro-businesses within Picados San Juan ´s value chain that stretches across the ´Oriente- antioqueño´, along the northern coast of the country and encompasses the city of Medellín.

Over the last decade these regions, once dominated by drug cartels and criminal gangs, separated from the capital Bogota by 300 miles and mountain ranges, have been, with the help of resilient and determined entrepreneurs and small businesses, transformed into a stable and growing economy. Medellín, the regional capital, an hour´s drive from La Unión has been converted from a city wracked by a criminal class and violence into a thriving centre of entrepreneurship. Passionate people like Laura form an integral part of this on-going process, ensuring long-term stability by providing economic opportunity to entire communities.

Helping entrepreneurs like Laura is part of the Fundación Bavaria’s long-term vision to ignite a culture of entrepreneurship in Colombia on the basis that entrepreneurship is the key to innovation and sustainability in the country that unlocks the passion, ideas and resourcefulness of individuals.

“When I leave an entrepreneurs meeting, I feel full of energy, seeing people, entrepreneurs; people that want to be successful and people that have done wonderful things without resources…”, says Juan Fernando Gallo, Gerente Relaciones Industriales – Director, Industrial Relations at Bavaria Head Office. “Any help our company can give them will surely generate employment and well-being for many in our country that really need it.”

Through Bavaria´s Destapa Futuro programme, the SAB Foundation has since 2006 invested over US$9m in 1,160 projects and provided seed capital to 332 small and micro businesses, helping generate over five thousand new jobs. Also comprised of the largest Spanish speaking entrepreneurship network in the world, a mentorship programme and a Business Angels Network (a group of private investors willing to invest in high-risk high-growth businesses and ideas) Bavaria is running the largest entrepreneurship programme in the country. Bavaria also provides microcredits to small retailers as part of one of the country´s most important public-private partnerships, having disbursed US$10.5m to nearly 7,000 retailers since its inception in 2009. Nearly 70% of these credits go to women, many of which are heads of households providing well-being for families, businesses and communities.

Entrepreneurs like Laura are, across the country, harnessing the power of entrepreneurship to make a difference to their communities. Helping Laura is having a ripple effect through her businesses value chain, bringing new opportunities for job creation, stable employment and growth.