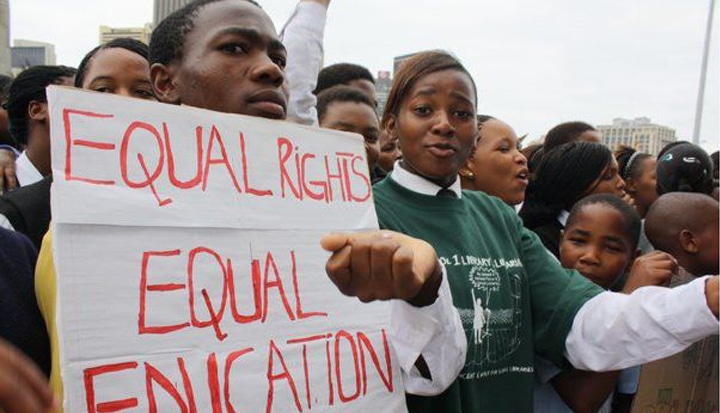 Ashoka and the Mastercard Foundation

Ashoka and the Mastercard Foundation


What if the most inspired and best-informed agents of change for “broken” school systems weren’t lawyers or politicians, but students themselves?

For a network of activists in South Africa, students are just that. Equal Education is a youth-led movement battling “class- and race-linked inequalities” in South Africa’s school system. The young people in the program, all high schoolers, come from the country’s black-majority townships like Khayelitsha. They’re called “Equalizers,” and they’re fixing the system from the inside out while learning real-world skills to become “difference-makers” in the future.

Rates of illiteracy, dropouts and unemployment are major challenges in South Africa. And despite progressive policies instituted by the African National Congress since the end of apartheid, South African children “consistently score at or near rock bottom on international achievement tests, even measured against far poorer African countries,” as Celia W. Dugger reported in The New York Times.

“Schools don’t have libraries, don’t have laboratories, fields, desks, chairs or structure: some learners are in school and learning under a tree,” said Nombulelo Nyathela, a spokesperson for Equal Education. “Those are some of the things that don’t allow learners to perform to their maximum.”

This reality makes Equal Education’s programming, as well as the proven influence of Equalizers, both welcome and desperately needed.

Equalizers aren’t just the inspiration—the brains—behind Equal Education’s social change campaigns, they’re also the muscle. “These are bright young learners who tell us what do, tell us what’s bothering them in schools.” said Nyathela.

The movement’s civic education program, which explores the political history of South Africa, informs the cause, helping young township South Africans understand why their schools lack sanitation facilities, for example. This kind of education prepares them to think about ways they can start to address entrenched, complex issues at a societal level. This isn’t typical coursework for students in South Africa’s divided school system. But it’s crucial for developing the eager, educated minds of young people so they can be valued agents of change in a dynamic, high-pressure world.

“If you’ve lived in a township all your life, and you’ve gone to a township school all your life, you don’t know that there’s better. You might never have seen a formal, modern school, or a private school in South Africa,” said Nyathela. “We teach them what it means to be an unequal society. That’s when they realize there’s something wrong with the education system and they become activists.”

These underserved teens put in real work each week. Under the guidance of former Equalizers, their mentors, high schoolers produce reports, fact sheets, posters, pamphlets, and videos to inform the public about the issues that need to be addressed, including gender inequality. They are also active on social media to make themselves accessible to the broader Equal Education network, which has active branches and members in provinces across South Africa.

Don’t mistake this for “slacktivism.” Equalizers also organize, march, picket, fast, sleep outside Parliament, make appearances on the radio, and demand change in the streets—and, sometimes, in court. They hone tangible skills to make real-world impact.

“We’ve put a lot of pressure [on the South African government],” said Nyathela. “Equal Education is a membership-based organization. We have thousands of learners all over the country that make these demands to government and that, of course, is beneficial, because learners say, ‘We are in these conditions and we want you to fix it.”

Victories have included the Harmony Case, which ensured that pregnant girls could not be barred from the classroom, the Lerato Radebe Case, which protected a (Rastafarian) student’s freedom to “display religious and cultural traditions in schools,” and a march for working street lights in Cape Town’s low-income communities and along busy thoroughfares, including Landsdowne Road.

But Equal Education’s biggest achievement to date has been their successful campaign for minimum norms and standards for school infrastructure. It was three years in the making. For tens of thousands of students, as well their teacher and parents and legal advisors, it was “the victory of a generation.”

An excerpt from a memorandum handed to government officials at protests in Cape Town and Pretoria on June 17, 2013:

On November 29, 2013, Basic Education Minister Angie Motshekga approved legally-binding regulations for school standards. For the first time in South African history, all schools are required by law to have a water supply, working toilets, electricity, internet access, and reduce classroom size to 40 learners max. By 2023, all schools must also have libraries, laboratories, and functional sports facilities.

These policies aren’t a cure-all, but they are a strong start: a beacon of hope for a new era of governance. And civic engagement, led by young people who understand what it takes to make a positive difference in a rapidly changing world.

“Students have seen real, tangible change. They’ve seen change in their schools. They stay [as Equalizers] to change more. Some have not seen any improvement so far, but they know that they are fighting for the next generation. They even say that,” said Nyathela.

“There’s something about it that keeps them activists, even when campaigns fail or are rejected by the minister—we’d be so upset. They would stand up, sing and say, ‘We should march again, picket again, write another person, start a petition.’ They keep it going. It’s amazing.”

Equal Education’s first coordinator, and one of its founders, Doron Isaacs, said: “White South Africans like me are still unfairly privileged by the legacy of apartheid. I slowly came to accept my obligation to undo this injustice. However, the struggle to replace apartheid with equality must be led by black young people from poor communities.

“Equal Education is enabling this to happen. The first student activists recruited seven years ago are now university graduates who run the movement. This makes me feel very positive about the future.”

The failures of South Africa’s school system are what has unified the young activists in the Equal Education network. But these township youths graduate with both the skills and leadership experience that’s required to rewrite the rulebook to tackle social challenges head on—and even write a new chapter in the history of a country.

To learn more about game-changing innovations for youth employment,sign up for the Future Forward newsletteror join the #AfricaYouthFwd conversation during a webinar and Twitter chat on May 27 at 9:30 a.m. ET.

Editor's Note: This blog was previously published on Forbes and is reproduced with permission.
Previous postNext post