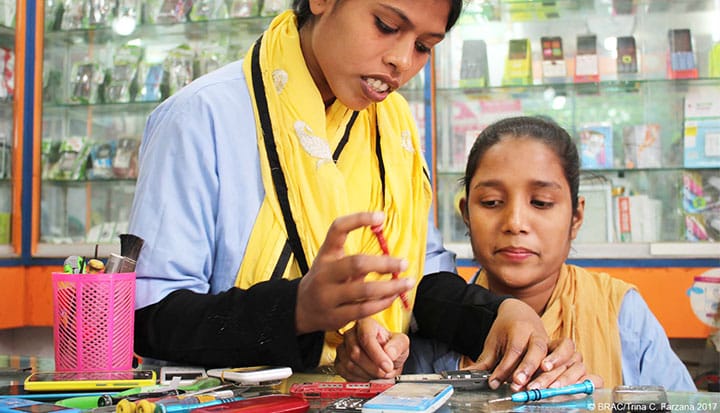 
Bangladesh has undergone an enormous transformation over the past forty years and has long been seen as an example of how aid can support progressive, pro-poor and country driven development. But a major issue has been holding the country back; young people and businesses in Bangladesh are facing a skills crisis. According to the National Skills Development Council (NSDC) , each year 2.2 million prospects enter the labour market. Technical Vocational Education and Training Institutions (TVET) in Bangladesh only have the capacity to train up to 1.3 million of them.

79% of Bangladesh’s workforce is employed in the informal sector, which is growing at an annual rate of 2.4%, adding 40% of total gross value to the Bangladesh economy. This growth is mostly driven by traditional enterprises. The majority of its labour force is 18-24 years old, an age group which is considered to be the most productive in any economy. Much of this is a result of increasing urbanisation which causes many of the new dwellers to engage in informal activities.

As BRAC’s founder Sir Fazle Hasan Abed says, “Skills development is an urgent need in Bangladesh, because of the high number of underemployed young people and our increasing dependence on skilled manpower from neighbouring countries.”

Skilling Bangladesh’s youth will unlock the potential of future generations and create opportunities for better jobs. In parallel, working with employers to improve the work environment to ensure that people are able to access decent work opportunities in the informal sector. Fortunately, in recent years, governments and NGOs’ alike have put much emphasis on development interventions aimed at resolving this situation.

BRACs’ Skills Development Programme (SDP) is one such intervention. It aims to create equal opportunities for young people through competency-based training that leads directly to jobs and entrepreneurship.

The STAR project is one of BRAC SDP’s interventions which is tackling this skills gap. The project builds on the traditional informal apprenticeship model that has existed in South Asia for thousands of years. The project places learners in pairs under a Master Crafts Person (MCP), who is usually an experienced shop-owner or worker within a particular trade. The apprentices receive hands-on training five days a week for a period of six months.

Most of the MCP’s are small business owners. The project has contracts with over 4,000 small businesses, which have been an integral part of the project. Not only do they provide opportunities for the apprentices, they also contribute information to help identify which occupations are in high demand. The curriculum and learning materials for apprentices are also developed through discussions with the small businesses. Without the provision of training space through their workshops, the equipment in their shops and the technical support for training, the apprentices would not be eligible for National Qualifications through the National Training and Vocational Qualifications Framework (NTVQF).

In addition to the work place based practical training, apprentices receive classroom-based soft-skills training once a week on various issues, including financial literacy, market assessment and English language skills. Once the training is completed, the project links the participants with potential employers. For those that are keen on self-employment, BRAC offers mentoring and technical assistance. Women and men are given the same choice of trades to pursue, and trades are chosen based on the demands of an increasingly service-oriented economy. These trades include: Thai aluminium fabrication, basic electronics, beauty care, graphic design, hardware technician/ IT support, mobile phone servicing, refrigeration and air conditioning, tailoring and dress making and carpentry, block batik and screen printing, embroidery and sequin crafts.

The project has been hugely successful. It has equipped 18,900 young people with skills, resulting in a 95% average job placement rate for all graduates and a 6 times increase in their average income, across seven divisions of Bangladesh. Crucially, the programme has benefited girls and young women (57% of graduates have been female) and marginalised communities including people with disabilities (10%) and the Hijra (transgender) community.

The project resulted in an increase in labour market participation and earnings of young people. Specifically, earnings increased by 1,150 BDT per month (£12) for girls and 889 BDT per month for boys (£9). More importantly, the study found that higher earnings translated into increased household welfare in the form of increased expenditure on food, durable asset holdings and savings. The STAR project reduces early marriage by 62%.

BRAC also found that the project has a significant positive effect on the empowerment of young people. Their role in household or personal decision making increased significantly and they are less likely to be addicted to drug substances.

The programme has not been without its challenges. The participants’ low level of education has been detected as a problem in most of the trades as it has affected their ability to learn lessons and implement them. As a result, there was some discussion as to whether the six months training apprenticeship was inadequate for some trades.

Additionally, parents of the beneficiaries often had a stereotypical perception of particular trades and activities. For example, many of the parents were worried about the prospect of beauty care apprenticeships, as they considered it an act of sin or against their religious beliefs.

Research showed that 97% of trainees’ parents expected the training to increase their child’s chance of getting a job and 98% were convinced the training would not lower the family’s reputation and honour within their community. This suggests that although the problems were there, they were not insurmountable.

There are a number of reasons why the skills development programme has been so successful:

BRAC believes apprenticeship schemes are the way forward to deliver the skills that employers need in the shortest timeframe possible. Through apprenticeships, Bangladesh can solve its skills shortage problems and continue its march towards recognition as a middle income country.