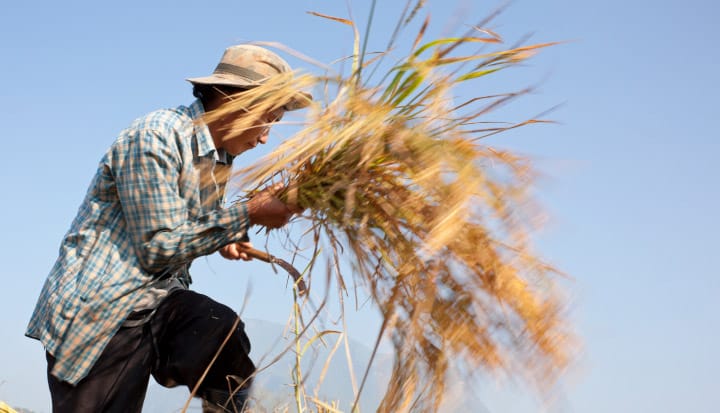 
Rural poverty has declined throughout Asia and the overall economic performance has increased. Agricultural development has played a major role in these improvements with smallholder farmers in the lead. Around the world they already feed almost a third of the world’s population and produce 80 per ent of the food consumed in the developing world. But we need to take smallholder agriculture to the next level to make sure rural communities can play an important role in producing enough food for a growing population.

A good opportunity for Asian smallholders to boost their productivity and increase their incomes coincides with an important change in the Asian food retailing market. Supermarkets with global links have emerged, particularly in South East Asia, responding to changes in life styles, the liberalization of retail trade and the entry of foreign direct investment in Asia-Pacific countries. By 2015, supermarkets in China are expected to reach 62 per cent market share, while Malaysia is expected to reach 61 per cent, Thailand 48 per cent, and the Philippines 36 per cent.

Producers’ associations or cooperatives can help small producers gain a footing in international food retailing. Belonging to an organized group allows them to bulk produce, reduce costs through economies of scale and, perhaps most importantly, to strengthen their bargaining power with private-sector actors. Membership can also bring access to financial, processing and business service. All of which are key to empowering farmers to deal with the private sector on a more level playing field.

One of the most well-known producer organizations in Asia is the Indian dairy cooperative. It comprises 12 million members, including landless labourers and women, and produces 22 per cent of India’s milk supply. In China, a group of small scale growers, aided by the local government, formed the Ruoheng watermelon cooperative, which then sold directly to wholesalers, retailers and supermarkets. Due to its timely delivery, quality, and marketing success, the cooperative’s membership increased from 29 to 152, and its farmed area increased from 0.2 hectare in 1992 to thousands of hectares in 2005.

The ability of smallholder farmers to increase their production in a sustainable way is enormously important. Not only to further reducing rural poverty in Asia, but also to feeding the world’s growing population and resolving pressing environmental and climate challenges. Enabling smallholder farmers to benefit from the proliferation of supermarkets and export opportunities in the region can set the stage for new progress in overcoming rural poverty and hunger in Asia. Our focus should be on helping them develop the knowledge and the other tools they will need to do precisely that.

About IFAD: The International Fund for Agricultural Development (IFAD) works with poor rural people to enable them to grow and sell more food, increase their incomes and determine the direction of their own lives. Since 1978, IFAD has invested about US$13.2 billion in grants and low-interest loans to developing countries through projects empowering about 400 million people to break out of poverty, thereby helping to create vibrant rural communities. IFAD is an international financial institution and a specialized UN agency based in Rome – the United Nation’s food and agricultural hub. It is a unique partnership of 167 members from the Organization of the Petroleum Exporting Countries (OPEC), other developing countries and the Organisation for Economic Co-operation and Development (OECD).