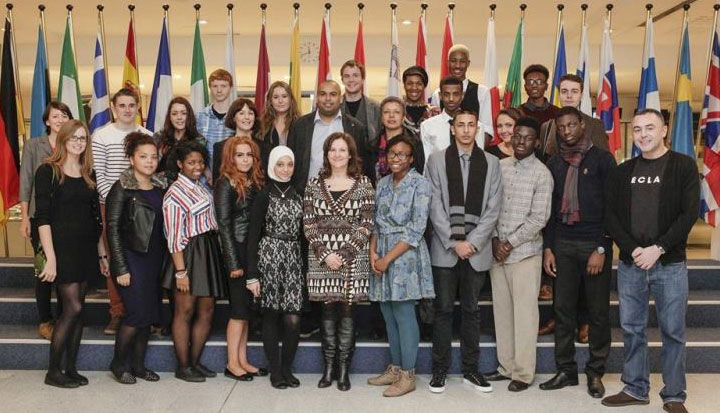 
In honour of International Women’s Day, we celebrated six changemaker women who are transforming communities, and redefining the role of women in society. From reforming waste management systems in Peru to an app that fights back against street harrassment, they are challenging the societal, economic, cultural and political inequalities in today’s world.

Through social innovations that span from religion to technology, these social entrepreneurs, all of whom are Ashoka Fellows, are empowering communities and individuals to make positive social change, regardless of their background or gender.

For her innovative solution to solid waste management, Albina Ruiz has earnt the title “Refuse Queen”. Working in the poor and congested slums of Lima, Peru, Albina built a community-based solid waste management system that empowers local communities to live with dignity and improved health, helps the environment and generates employment, with waste management and recycling jobs often providing women with an additional income.

Domestic workers, the majority of whom are women of colour, are one of the most at-risk populations for exploitation and abuse in the US. Ai-Jen Poo founded the National Domestic Workers Alliance to give visibility to what she has described as “the most visible invisible workforce” and to organise and leverage the collective power of domestic workers.

By emphasising the caring nature of domestic work, Ai-Jen Poo is redefining how society views and values domestic work.

After witnessing first-hand the role of women in the Libyan uprising in 2011, Alaa Murabit was frustrated to see women who had had active and leading roles in society retreat from community and public life once the revolution was over. Alaa founded the Voice of Libyan Women to empower women socially and economically.

Religion is often misused to support the subjugation of women, but Alaa is turning the tables on this tactic, using scripture – so often the defence of used by those in positions of power to suppress women – to liberate these women. By working with local religious leaders and community organisations Alaa is demonstrating that women’s rights and religion are not mutually exclusive.

Founder and Chief Executive of RECLAIM project, Ruth Ibegbuna, is tackling the UK’s low rates of social mobility and changing public perception of working-class young people in UK society. She is empowering a generation of change-makers and activists by amplifying the voices of disadvantaged and often ignored young people across Greater Manchester, and translating this activism into new pathways to employment and leadership.

“I’m learning to wrestle with my inner voice and to challenge directly those who make inaccurate assumptions”, writes Ruth. She has spoken about overcoming both external and internal prejudices to become a successful leader as a black, Northern woman in the UK.

Emily May is tackling a problem that affects the majority of women around the world: public harrassment. Through her organisation Hollaback!, Emily is giving people the tools they need to end harassment – be it sexist, homophobic, ableist, sizeist and/or classist – in public spaces. Hollaback! challenges the culture of victim-blaming by focusing on naming and shaming perpetrators of harassment.

Tackling public harassment both on the street and online, Hollaback!’s smartphone apps allow victims and bystanders to report harassment, which highlights its prevalence and seriousness to policy-makers, whilst also providing comfort and support to victims.

Hasina Kharbhih tackles the issue of human trafficking in north-east India, with a particular focus on women and children, who are the most vulnerable. Hasina developed the Impulse model, which raises awareness of human trafficking and provides rehabilitation for victims, and which has been replicated internationally.

Hasina cites her mother as a strong role model when she was growing up. “She has always stood by her own value system and ensured that her values are not negatively affected by any kind of social pressure. That made me who I am today,” she explains.

This article first appeared on Virgin and is reproduced with permission.