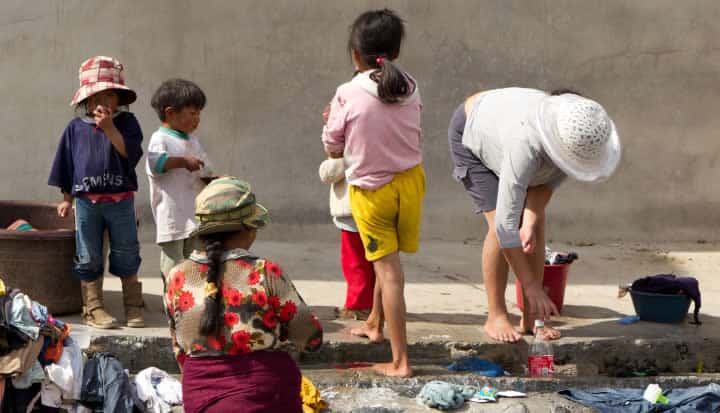 
In recent years, rattling off the stats underpinning the problem of water and sanitation solutions has thankfully become more common. Awareness is on the rise.

But that doesn't change the fact that an estimated 2.5 billion people – 37 percent of the world’s population – face the health risks associated with deficient or absent sanitation facilities, and more than 780 million people lack access to safe drinking water. And, unfortunately, data on progress for Millennium Development Goal 7, Target 7c, to halve the percentage of the population worldwide lacking these needs by 2015, has shown that while we may meet our target regarding drinking water, we will most likely miss our target regarding sanitation. According to the UN, at current rates the total target may not be reached until 2026.

Even then, we’re left with a lot of work to do to reach the ultimate goal of universal access to clean water and improved sanitation. For the past three years, two early-stage social enterprises in South America – TOHL in Chile and X-Runner in Peru – have been hard at work creating the means to get us there.

When disaster struck Chile and Haiti in early 2010, the desire to help spurred a group of engineering students from Georgia Tech to pursue a unique idea for expanding water access to bottom of the pyramid populations. By designing a process that would rely on helicopters to lay durable pipeline and transport water to poor and rural communities – negating the need for underground infrastructure or water trucks – the founders of TOHL (Tubing Operations for Humanitarian Logistics) managed to create an environmentally friendly water supply solution with a projected 20-year lifespan at, on average, a tenth of the cost. Forbes took a peek under the hood of their operations last summer.

While founding partner Apoorv Sinha crafted the original idea, TOHL’s current President/CEO Ben Cohen and current Director of External Affairs Travis Horsley were instrumental in turning that idea into a business. Horsley, while involved in missionary work, identified Chile as an opportune market for testing and piloting operations. As soon as the group won funding from Start-Up Chile early last year, Cohen caught a flight to Santiago, headed for 12-hour days and seven-day work weeks.

The rest has fallen into place in a matter of months. After several tests, the fastest known pipeline installation ever recorded (1km of pipeline in nine minutes over mountainous terrain), and a project for Chilean chemical company SQM, TOHL’s management team identified four rural communities roughly two to three hours outside of Santiago with which they will work in 2013. Given that the company’s model has potential applications across the board – mining, military, firefighting, and,eventually,disaster relief (its original purpose) – the team’s sights are set on more than technical solutions In Cohen’s words: “Our passion drove us to start this business to help people get access to water and to help improve people’s lives.”

After struggling to get her concept for a cost-effective dry toilet off the ground in India in 2010, Swiss product designer Jessica Altenburger pegged the slum areas of Lima, Peru, as a potential high-impact location for her company. Intent on developing an easy-to-install, water-free toilet that would also tap into the increasing need to recycle raw materials from waste, Altenburger and her business partner, microfinance veteran Isabel Medem, brought X-Runner’s operations to one of the driest capitals in the world (which receives, on average, fewer than six centimeters of rainfal per year).

The model’s flexibility allows it to be responsive to the specific needs of diverse communities all over the world. In India, Altenburger had tried producing biogas from waste collected from X-Runner toilets, but in Peru, the product is compost The X-Runner toilet stores customers’ solid waste (once it has been treated with sawdust to eliminate odors, reduce insect infestation, and allow for sanitary containment) for weekly collection and processing by Altenburger and her team.

Altenburger proudly trumpets X-Runner’s approach to water and sanitation challenges as a departure from common practice, applying a mix of new and proven ideas to help communities that are often overlooked in development efforts. “There has been so much done since 2008 in the sanitation sector,” she explains, “and I think what has really been left out so far is urban sanitation.” Discussing the strain of increasing population density in Lima, especially the explosion of life in slum dwellings (a population now estimated at 828 million worldwide), Altenburger points out that as people from rural communities move to low-income urban areas, many face the same challenges they thought they were leaving behind. As she vividly describes, “where there is no water, people understand now – here in Lima especially – that it’s not going to come any time soon.” For this exact reason, the X-Runner toilet helps families and small businesses improve their sanitary conditions and conserve their scarce water supply for other uses.

As entrepreneurs in Agora Partnerships’ Class of 2013, Cohen and Altenburger are looking to connect with the human, social, and financial capital that they will need to scale their businesses and maximize their impact in Latin America and – after sufficient testing and development – the broader global context. TOHL’s team will add to their existing government contracts in the upcoming year, and is already exploring options in South Sudan and other dry and disconnected areas.

Altenburger and Medem have a sales goal of 500 units in 2013, up from 50 in 2012. These units are now being assembled by a Lima-based boat manufacturer that has increased their daily output from one to eight units. Even Agora itself is experiencing a growth period this year, working with a robust class of 27 high-impact companies, up from an initial class of nine in 2011.

The promise of propagating solutions in the water and sanitation space continues to grow. The WHO and UNICEF have made clear that even if the contributions of companies like TOHL and X-Runner help us meet MDG 7, we will be left with 1.7 billion people who lack access to improved sanitation facilities worldwide, while 80 percent of people without access to safe drinking water continue to reside in rural communities. Reaching these targets would leave us with more than a million people lacking access to safe drinking water in Chile, and nearly seven million lacking improved sanitation facilities in Peru. But Cohen, Altenburger, and the Agora network know that the tools being developed in Latin America will bring us closer and closer to the lofty goal of access for everyone.