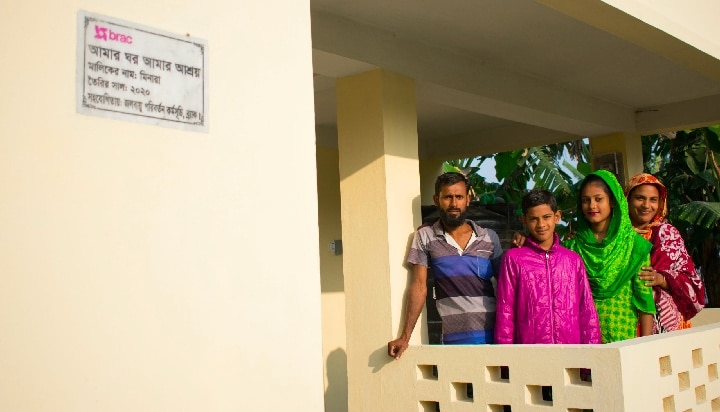 BRAC and the Global Center on Adaptation (GCA) are working together to model and scale up efforts to build climate migrant-friendly cities in Bangladesh, where catastrophic weather events have pushed migrants into overcrowded urban centers. In this article, BRAC expert Dr Md Liakath Ali, explores how a locally led adaptation solution – the mini cyclone shelter – is revolutionizing disaster management in Bangladesh, and setting an example for the world.

BRAC and the Global Center on Adaptation (GCA) are working together to model and scale up efforts to build climate migrant-friendly cities in a country described as an “internal migration pressure cooker,” where catastrophic weather events have pushed migrants into overcrowded urban centers.

GCA’s Global Hub on Locally Led Adaptation is located in the GCA South Asia regional office in Dhaka to benefit from the leadership of Bangladesh in empowering and enabling local communities and individuals to address local challenges, particularly through adaptation solutions.

In this blog, BRAC expert Dr Md Liakath Ali, explores how a locally led adaptation solution – the mini cyclone shelter – is revolutionizing disaster management in Bangladesh, and setting an example for the world.

The need for shelter in low-lying Bangladesh, one of the most disaster-prone countries in the world, is rapidly increasing. Record-breaking floods in the northeast of the country last June drove 7.2 million people out of their homes. In 2020, the coastal belt was hit by a super cyclone that uprooted 2.6 million people. In both situations, millions lost their homes and were forced to stay in shelters for long periods.

The Government of Bangladesh has been investing in constructing cyclone shelters for many years. In the aftermath of a catastrophic cyclone in 1991, that investment increasingly went into constructing multi-purpose cyclone shelters. These have helped to drastically reduce the loss of life. In 1970, for instance, the Bhola Cyclone had a death toll of 300,000. In 2020, during Cyclone Amphan, approximately 20 people died in storm-related incidents. 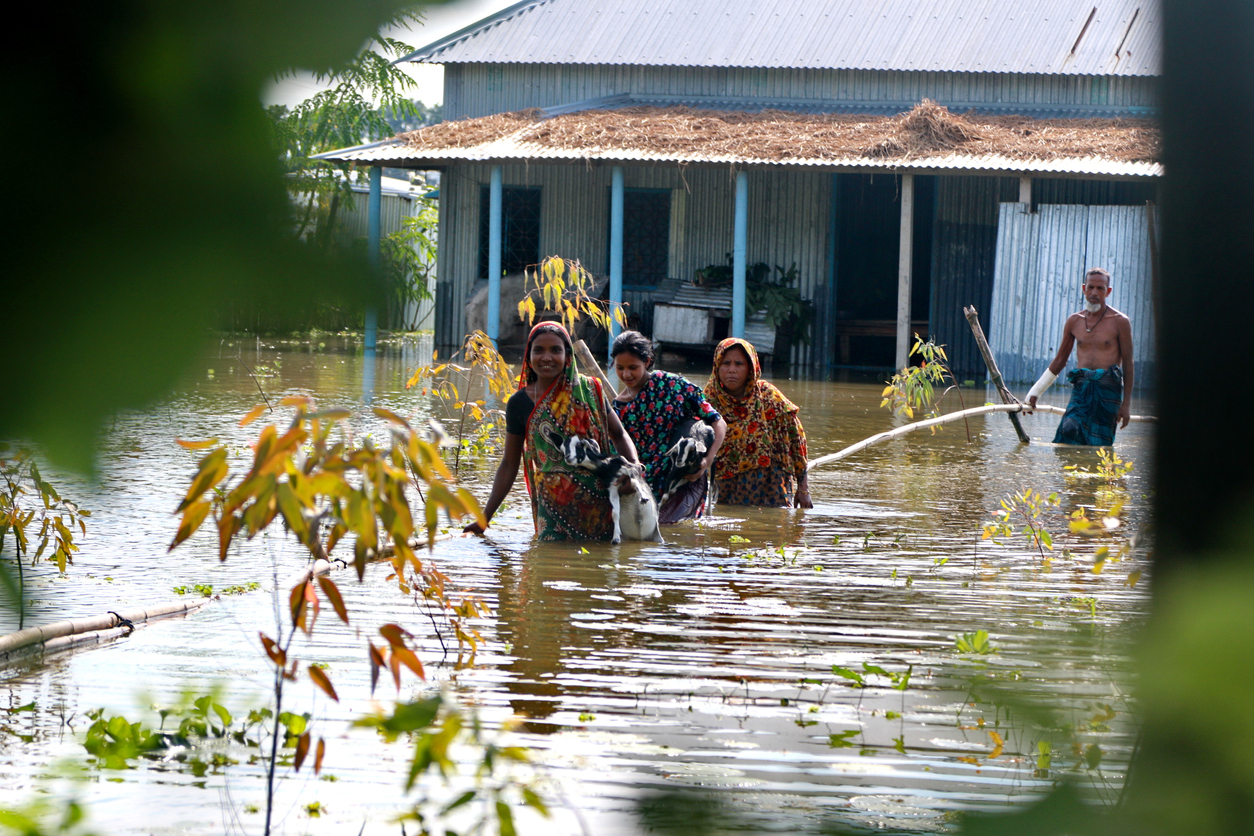 But the multi-purpose shelters don’t protect homes, and they only help those who can get to them.

When people leave their homes, they leave everything they own. Shelters cannot accommodate belongings, and there is no space for livestock. They are often far away because finding land on which to build them is difficult, and getting to them is particularly challenging.

Shelters are also basic, with shared facilities for women and men, which can discourage families, particularly in conservative areas, from using them. There are often security issues, because they accommodate so many people and often lack sufficient lighting.

In response, BRAC, along with a number of other organizations, has been constructing climate-resilient houses that double as mini cyclone shelters. This adaptation approach has been locally led by communities using existing resources and has resulted in 35 small two-story structures that serve as homes on a daily basis and mini shelters during cyclones or tidal surges. 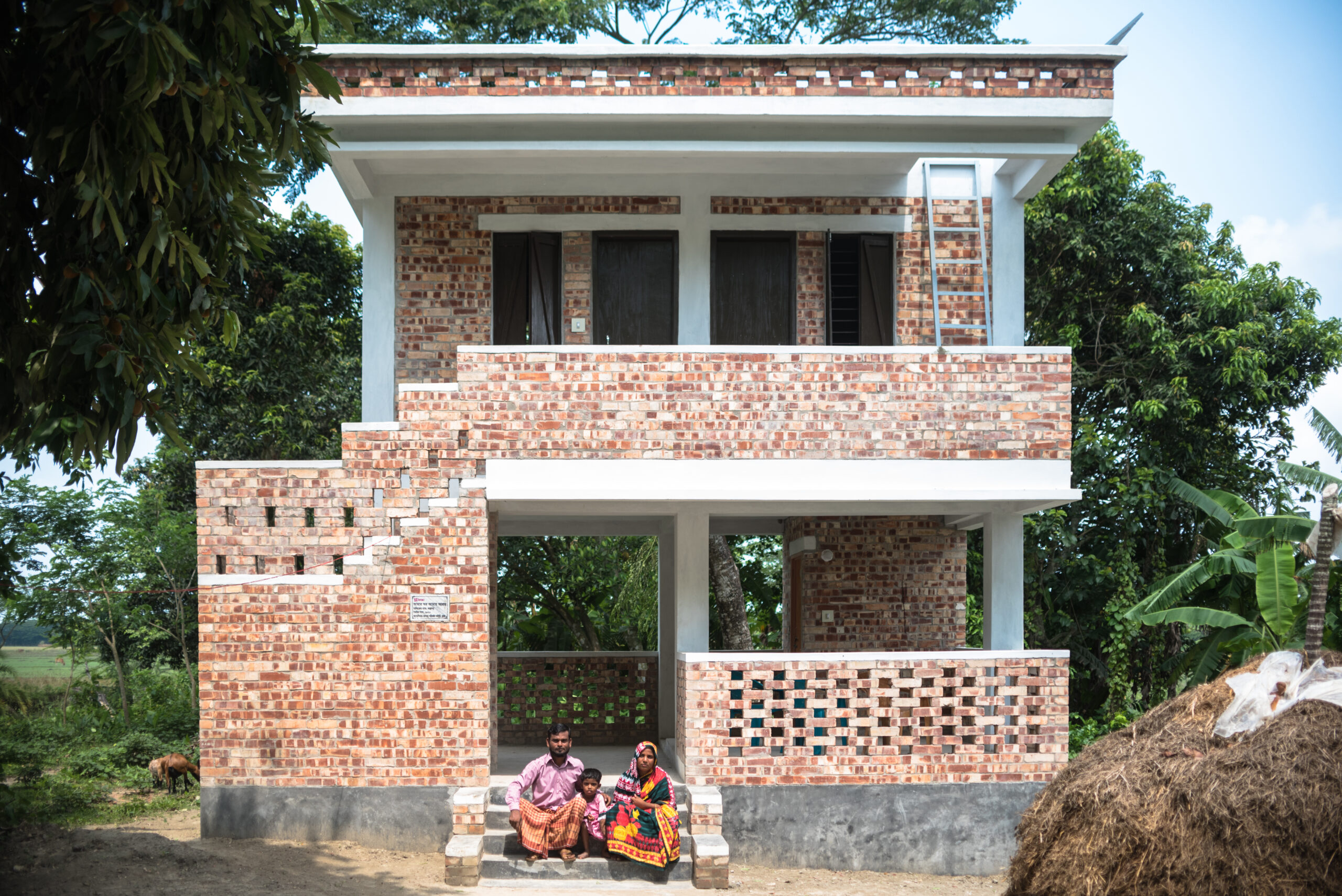 What are mini cyclone shelters? These climate-resilient two-story structures serve as homes on a daily basis and mini shelters during cyclones or tidal surges. CLICK TO TWEET

Each mini shelter houses one family, with the understanding that their neighbors will be allowed to shelter there during disasters. On the top floor there are rooms for living, so women and men can sleep separately. There are also bathrooms, rainwater harvesting facilities, energy saving cooking facilities and solar electricity. The ground floor can accommodate livestock, and water can run through it without causing damage. The structures have windows and a fan – uncommon features in many houses in Bangladesh – to help with increasing temperatures.

There are myriad other benefits too. There is no need to travel long distances or leave belongings or livestock, and there are no safety or security issues because mini shelters can only house a maximum of 50 people, and everyone knows each other. It is much easier to find sites for mini shelters and they can be built much more quickly. Mini shelters are also cost-effective – they are made of red brick, to avoid the cost of plastering – and 50 mini shelters can be built for the price of one multi-purpose shelter, accommodating 1.5 times more people.

BRAC is currently exploring partnerships with the Government of Bangladesh and the United Nations Environment Programme (UNEP). In parallel, BRAC is testing the mini shelters further and exploring other features that could be incorporated. Their design is flexible, so the structure’s size and height can be adapted to suit local needs – for example they can be built higher off the ground in wetter areas.

The evolution of these mini shelters is important globally on several levels. It underscores the importance of listening to those closest to the challenges. It demonstrates that locally-led adaptation solutions are not only more cost-effective and quickly implemented, but they are more sustainable than top-down approaches. The mini shelters help people stay in the land where they have lived historically, reducing strain on cities and preserving local cultures, languages and traditions.

Climate change will force the world to adapt, even as we increase efforts to reduce its impacts. Listening to those with lived experience will benefit everyone around the world.

The author is Director of Climate Change and Urban Development at BRAC. He has 32 years of experience working with various government, non-government, donor and UN agencies.

This article was previously published on the Global Adaption Centre website

Interested in Climate Justice? Register to join our Climate Justice Summit, 9-10 November, Online or in person from Cario, Sharm El-Sheikh and London