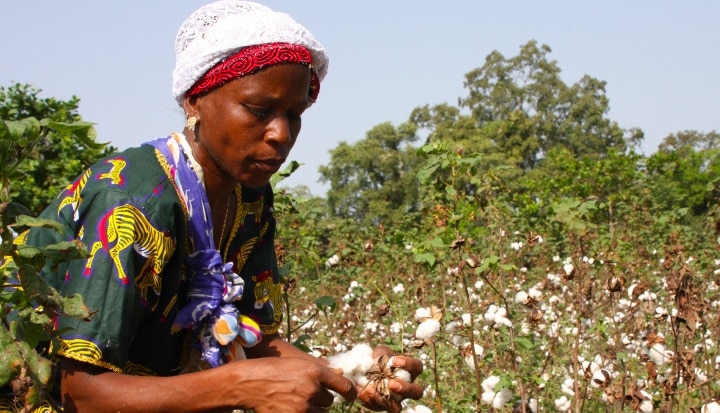 Through our purpose to ‘Re-imagine Global Agriculture’, Olam aims to address the many challenges involved in meeting the needs of a growing global population, while achieving positive impact for farming communities, our planet and shareholders.

Recently, I put myself in the shoes of a woman cotton farmer in Ivory Coast. I realised very quickly that there aren’t very many of these shoes to fill; the reason being that very few women and men recognise women as cash crop farmers. Cotton farming is one of the main sources of income for rural populations in the north of Ivory Coast, but within the entrenched cultural constraints of these communities, only a few women have access to it.

Even in neighbouring Ghana, where gender equality is far from finished business, you are much more likely to see women working on their own farms or at least as a member of a husband and wife team. That’s not to say that Ivorian women don’t participate in cotton farming, particularly during busy harvest periods; it’s just that their work is effectively invisible as the man is considered to ‘own’ the cotton crop and its revenues. Indeed, before Olam’s cotton business (SECO) set up shop in 2008, there were no women registered as cotton farmers in the whole of Ivory Coast.

During my overnight stay in one of the villages, I observed the women carrying huge containers with what must have weighed in excess of 30kg of water on their head, with an infant strapped to their back, and it struck me as utterly incongruous that women can and are expected to undergo this arduous daily task, among countless others as equally strenuous, but also be deemed ‘not strong enough’ to guide a plough through the cotton field. And while I may have attempted to delicately test this rationale with one of the male farmers, it did occur to me the balance that companies like Olam have to strike between encouraging positive change in these communities and respecting cultural boundaries. Because what we might regard as glaring gender inequality, for them is the basis of functioning society.

But even in the face of such pervasive gender imbalance, there is scope to enable men and women to benefit equally from economic and development opportunities. In 2013, having identified a number of self-formed farmers’ wives groups across a scattering of villages, SECO teamed up with a local NGO (REFAD) to provide these women with entrepreneurial skills and access to credit. Their groups were formalised into associations, to provide the women with financial support to embark on an income-generating activity of their choice, cotton farming being one.

And so, the first independent female farmers in Ivory Coast emerged, with the creation of communal plots of land to share amongst the group members.

Such is the story behind the Benkadi women’s association in the village of Tchewelevogo. I was lucky enough to be trusted to join them to harvest a few handfuls. A few women start singing and playing instruments while the rest dance through the field in a wave of colour, plucking the soft cotton balls from their burrs and leaving row after row of bare stalks in their wake. While I’m still working my way up my first plant, I can’t help but admire how these women have made such tiring, hot work into a joyous occasion. I’m assured that the entertainment isn’t just for our benefit and judging by the rapidly growing white cloud on the ground as the women emerge from the field emptying their sacks of the fluffy contents, I would argue that picking to the beat is pretty productive.

But regardless of the method, the merit of women farmers- not just to Olam but to the community and themselves- is absolutely clear. For the last crop season, one of SECO’s female cotton growing associations produced a yield of 1400kg per hectare against a national average of 1263kg.

Djeneba Sanogo from the Benkadi association has been working on cotton farms for 30 years, but only became registered in her own name under SECO in 2016. “Growing cotton myself helps me be independent and not rely on my husband. I don’t have to ask him for money all the time. With my own money, I can buy what I need like clothes.”

Today, SECO has 241 women registered as farmers- a long way to come from zero in four years, but there’s much further to go before making a significant female dent in the farmer workforce. In the case of Ivory Coast, gender norms don’t just differ from country to country, but within them too. So while some of the women in the village of Tchewelevogo are enjoying a taste of financial independence, in other villages nearby, the gender divide is still very strong.

And here lies the chicken and the egg conundrum. The proof that’s needed to convince these communities of the value of female empowerment lies in their ability to make a significant contribution in yields relative to the men and show that these earnings contribute to their households. But even where women farmers do exist, with minimal access to land and the cultural boundaries to farming cotton, they can only account for a negligible two per cent of a cooperative’s total yield.

Ultimately, it is thanks to the courage and ambition of these first women to challenge the status quo and work with Olam that has encouraged others to pursue a career in cotton farming for themselves. And that’s why these empowered women remain our most persuasive assets to slowly but surely re-imagine the gender balance.