Putting Women in the Driver’s Seat 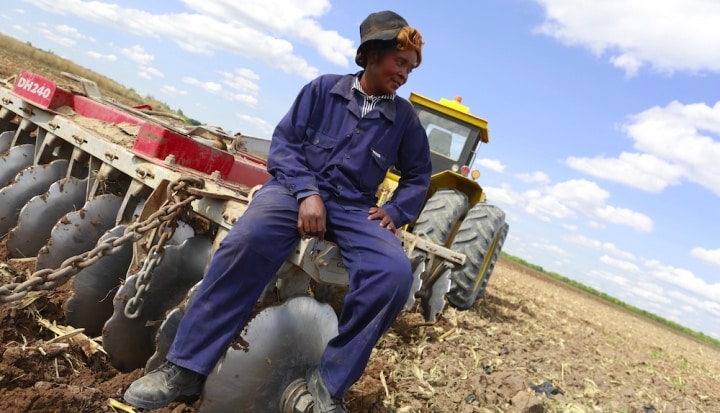 Longstanding traditions and practices relating to gender stereotypes and cultural acquiescence have a particular impact on the livelihoods and career opportunities for women in the communities where farming is often the biggest employer. What’s clear from this Olam survey is that women driving tractors can be meaningful agents for change.


In many traditional farming communities, women handle most of the manual work in addition to having responsibilities for home and family management, as many of them have never driven a car. They are consigned to work in planting, weeding, and drying beds while also managing the feeding, education, and healthcare of their immediate and often extended families.

Conversely, men usually take responsibility for operating technology tools, such as tractors and other devices, which also earn higher wages than manual work, and those wages are paid to the men and not always immediately or wholly shared with their families.

Longstanding traditions and practices relating to gender stereotypes and cultural acquiescence have a particular impact on the livelihoods and career opportunities for women in these communities where farming is often the biggest employer (78% of all Zambian women depend on the farming sector).

Olam is committed to challenging this status quo and using AtSource, our sustainability insights platform, we can monitor the impact of our efforts and see where to target further interventions. Our customers have full visibility too, giving them the opportunity to help us influence these elements for the better and meet their own sustainability goals.

The idea to train female tractor drivers on our own estates came from Zimbabwe and South Africa where we’d seen women running large farms, so we knew what was possible. The manager and other leaders of Olam’s Kateshi Estate decided to trial it and recruited six women to train on operating small tractors used to haul water and coffee beans (Kateshi is 2,461.45ha. and is part of the larger 6,985ha. Northern Coffee Corporation Ltd. (“NCCL”).

Finding willing volunteers was no problem; in fact, they showed up for the first day of class with their hair done and wearing makeup, as befitting a special occasion. The men on the farm were slightly amused, thinking that the very idea was some sort of joke.

But the women thought otherwise and were quickly proving themselves behind the wheel. A representative from Zambia’s Road Transport Safety Agency (RTSA) joined to help educate them on maneuvering and road safety. Word quickly spread in the community and more women asked to join the programme.

To understand the effect this new line of work has had for these women’s position in their households and communities, as well as female empowerment more broadly, we commissioned a study last year, led by a social research consultant at the University of Bern, Switzerland. The data applied a mixed method approach using qualitative and quantitative methods based on data triangulation. 83 women were interviewed and/or engaged in focus group discussions, along with 60 men and children to understand the perception of the initiative of the wider communities around the NCCL estates, as well as to establish a typology of household decision-making in the area.

Its main findings were:

In the qualitative interviews, all of the female drivers strongly emphasised economic empowerment as the prime benefit and that it positively impacted all of the other indicators of gender quality and empowerment. The quantitative responses from both men and women confirmed these observations, ranking economic improvement first among the benefits.

Just as significantly, 39% percent of the women drivers living with their husbands reported that they maintained some level of control over decision-making on how the income they earned is spent, 38% reported control over half, and 23% said that they have full autonomy on how the funds are used.in family households including female drivers, suggesting a renegotiation of household responsibilities between husbands and wives.

This economic empowerment enabled them to pay for schooling for their children, support relatives, improve housing, buy better quality food, and diversity their livelihoods by investing in other income-producing activities.

Importantly, there were no increased burdens or negatively perceived increased responsibilities for the women tractor drivers; they managed to balance household and work responsibilities by getting help of relatives whom they renumerated by supporting their education, for instance. This helped to control the workload.

Perhaps more promisingly, many impacts of the programme were seen as generational, as both male and female quantitative responses ranked highly the motivation the initiative provided for other women and younger girls to engage in economic activity outside of the home (like selling clothes or opening small shops). Many of the young girls who participated in focus groups as part of the study said they saw driving tractors as a stepping stone to financing higher education, and 98% of the female participants said they’d allow their daughters to become tractor drivers.

What did we learn about implementing an effective programme? After training 76 women by the end of 2020, I think there are three lessons that we’ll factor into our next efforts:

What’s clear from our survey is that women driving tractors can be meaningful agents for change.