Private Schools are Bridging Crucial Gaps for the Poor 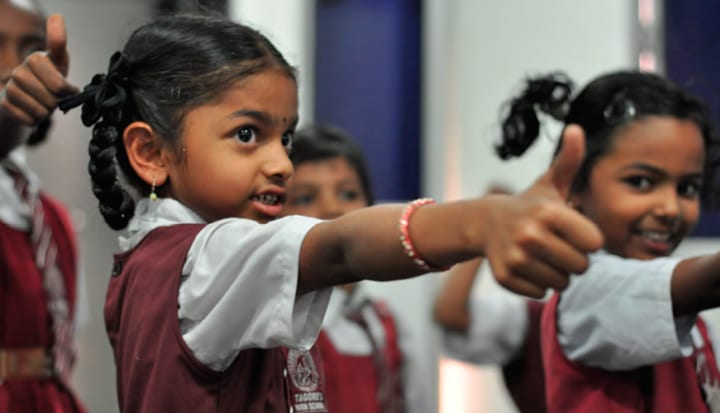 Private Schools are Bridging Crucial Gaps for the Poor


When Mohammed Khan, a local businessman in the Indian city of Hyderabad, read in his newspaper that there was an entire neighbourhood of professional beggars with no access to school, he resolved to build one. Not only that, he managed to persuade the parents that classes for their children were worth paying for. Charging as little as 100 rupees a month, Khan’s Royal Afhaam Islamic English High School is a recent addition to a burgeoning phenomenon in education that is gradually emerging from under the radar: low-cost private schools for the poor.

For millions of children living in poverty, there still exists a very real gap in access to primary and secondary school. That gap may exist for many reasons – the “local” public school is simply too far away, or uniforms are prohibitively expensive, or overcrowding and lack of accountability for staff means teachers are frequently absent from the classroom.

A new white paper published by Endeva, “Private schools for the Poor:Endeva, “ Educating millions in the developing world” shows how private schools are stepping up to these challenges and thriving in low-income markets. Long thought of exclusively serving the middle and upper classes, low-cost private schools are currently providing an essential bridge to basic education in even the poorest communities. These locally-based schools are spearheaded by “edupreneurs” – or education entrepreneurs – like Mohammed Khan who often come from the community itself, making the founding of these schools a grassroots effort.

Low-cost private schools are providing three critical elements that make them favorable alternatives to public school for many parents:

Private schools founded by local edupreneurs – like the one from Mohammed Khan – are often more physically more accessible to children. To get to government schools, in contrast, children often have to travel long distances, making the children’s security a major concern for parents. In Dhaka, the capital of Bangladesh, for example, only one in four slums has a government school.

Furthermore, private schools are affordable. Tuition often costs a few dollars a month or less, which is within reach of what many low-income families are willing and able to pay for education. For example, in Hyderabad, the fees for fourth-grade primary students range between $1.63 and $2.15 per month, equivalent to between 4 and 6% of the monthly minimum wage. In addition, many low-cost private schools offer discounts to parents who struggle to afford school fees.

Lastly, these private schools and their teachers are more accountable to parents than public schools are. This is reflected in studies showing higher levels of teacher attendance and activity in low-cost private schools than their public counterparts – but also in the results children achieve. For example, a study by the pioneering education researchers James Tooley and Pauline Dixon found 75% of government teachers were teaching when visiting schools compared to about 94% of teachers in low-cost private schools.

Education as a community effort: A call for action

Despite the essential service that private schools are providing, they continue to face a litany of challenges. Chief amongst those challenges are obstacles to securing finance, making it difficult to equip classrooms and train teachers; inhibiting regulations; and improving the quality of education. Edupreneurs cannot overcome these challenges alone.

The paper sets out to provide recommendations for how actors in the ecosystem of these schools could support them in addressing these challenges. It departs from observations made in the city of Hyderabad, India, which is the example of the most advanced supporting ecosystem for private schooling for the poor. However, the reocmmendations provided may also help to nurture other private education ecosystems around the world.

Development partners can influence policymaking to help edupreneurs be recognized as partners in the quest to provide universal access to education and remove regulatory hurdles. Development partners can also support research on low-cost private school models, and contribute to the dissemination of best practices. For example, the Center for Education Innovators, supported by the UK’s Department for International Development, identifies and analyzes functioning models that provide private education to the poor and connects non-state education innovators.

NGOs and the private sector can play an important role in supporting edupreneurs in improving the quality of education they provide, for example by proving learning aids or by training teachers. They may also act as independent assessors of school quality through school rating or certification systems, such as Gray Matters Capital, whose School Ratings Program conducts comprehensive assessments of affordable private schools across India as a way to help ecosystem stakeholders understand gaps, develop school improvement solutions and monitor progress..

Researchers can raise awareness of the realities of low-cost private schooling, including robust analysis of educational and social outcomes that can inform policymakers and other stakeholders.

Low-cost private schools are already making a difference in placing education in the hands of millions of low-income children; more support, better coordination, and more understanding on behalf of actors in the ‘education ecosystem’ can not only improve the education being provided currently, but also provide life-changing opportunities to many more children born in poverty.

This blog article was coauthored by James Tulloch and Alyssa Rivera. It was originally published on the Practitioner Hub.

“Private schools for the Poor: Educating millions in the developing world” was published in March 2014 by Endeva. The lead author is James Tulloch; the paper is co-authored by Aline Krämer and Lisa Overbey. This white paper is available for free download from the Endeva Publications Page.