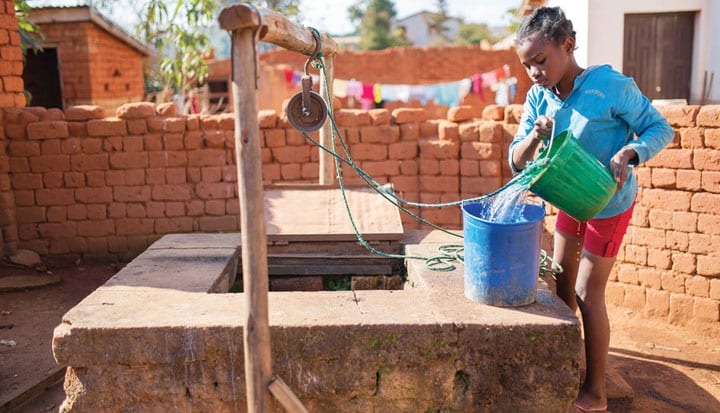 This World Cities Day, Neil Jeffery, CEO, WSUP and Susan Mboya, President, The Coca-Cola Africa Foundation take a look at how WSUP is working with The Coca-Cola Company to improve water access in cities in sub-Saharan Africa.


Urbanisation is a global trend – with distinct opportunities or complex challenges, depending on where in the world it is taking place. Every day across Africa, economic, climatic, and political factors force migration from traditional rural dwellings to makeshift urban neighbourhoods. These urban settlements often lack access to basic water and sanitation services, leading to health issues for residents and trapping them in a cycle of illness and poverty.

Each year, World Cities Day aims to raise awareness of the challenges as well as highlight success stories of global urbanisation. This World Cities Day, Water & Sanitation for the Urban Poor (WSUP) and The Coca-Cola Africa Foundation (TCCAF) would like to share the story of our partnership with African cities to address their urban water challenges – and particularly the successes achieved in Antananarivo, Madagascar.

Antananarivo is one of the fastest growing cities in Africa. Antananarivo is the rapidly growing, sprawling capital of Madagascar. Each month, the population swells by an estimated 25,000 people. Most of the individuals and families arriving in the capital have no alternatives to living in poorly-built housing with limited access to water and sanitation services.

Like virtually all cities, inequality exists across Antananarivo. The buildings in the central business district may have reliable access to water; but just a few blocks away where a low-income community of the city is housed, access can be a daily struggle. Residents without a reliable connection to the city’s water network often queue for hours to buy potentially unsafe water from an illegal water vendor or from a neighbour’s hand-dug well.

A challenge for all African cities

As the world’s population becomes increasingly urbanised, water and sanitation challenges are becoming some of the most critical urban issues of modern times.

In Antananarivo, rapid urbanisation has stretched the need for water and sanitation beyond local authorities’ capacities. As the population steadily grows, city leaders are battling to adapt their services to provide safe water and adequate sanitation for every resident of the city, including the most marginalised residents living in informal settlements, all while maintaining sustainable finance and supply models.

These challenges are faced by cities across Africa. As urbanisation gathers pace across sub-Saharan Africa, city leaders throughout the continent are grappling with its effects in their communities. According to The Brookings Institution, infrastructure and service delivery have not kept pace with urbanization – over 50% percent of urban dwellers in sub-Saharan Africa live in slums and only 40% of the urban population has access to improved sanitation facilities.

A changing climate and an increasing number of extreme weather events add even more complexity to an already multi-faceted problem. Flooding from events such as Cyclone Enawo, which hit Antananarivo in March 2017, can cause pit latrines and septic tanks to overflow, flushing pathogens and pollutants into the streets and surface water sources, ultimately into human contact. In densely populated cities with poorly designed sanitation infrastructure, floods can quickly result in the spread of diseases like cholera.

Similarly, drought, which has affected much of eastern Africa this year, places even greater stress on the already limited ability that water utilities have to meet demand. As water becomes more scarce, low-income residents are increasingly forced to rely on unsafe water sources like polluted rivers, or to illegally dig up and tap in to utility-owned water pipes, to meet their daily needs.

The Coca-Cola Africa Foundation and Water & Sanitation for the Urban Poor have been working together since 2011 to address urban water and sanitation challenges such as those described here – and to enable cities like Antananarivo to provide safer and more reliable services to low-income residents. To date, our partnership has operated in six countries: Ghana, Kenya, Madagascar, Mozambique, Uganda, and Zambia. Together, we plan to reach more than 1.5 million people with access to safe water, ultimately accounting for one quarter of The Coca-Cola Africa Foundation’s Replenish Africa Initiative (RAIN) goal to reach at least 6 million people with improved water access, sanitation and hygiene by the end of 2020. RAIN is Coca-Cola’s contribution to helping Africa achieve the United Nation’s Sustainable Development Goals on clean water and sanitation access. To date, RAIN has reached more than 2.6 million people with improved water access, sanitation and hygiene across 38 countries.

Achieving universal water access will be a massive challenge, but we believe that it is possible to achieve this through collaborative efforts – such as this partnership. We are determined to support progress towards achieving the UN Sustainable Development Goal number 6 and contribute towards safe, affordable water and sanitation access for even the poorest city residents.

Central to our partnership model is the belief that creating high-capacity citywide service providers will create stronger and more resilient cities. In Madagascar, this has meant forging a deep relationship with the national water utility, JIRAMA, to strengthen its ability to reliably and safely serve low-income customers.

In collaboration with JIRAMA, we have focused on two key areas: increasing the volume of water and amount of pressure available across JIRAMA’s network – through repairing leaking pipes and preventing illegal connections; and extending access into Antananarivo’s low-income communities – through engagement with the communities and local governments.

We are committed to building the resilience of JIRAMA and every other community and service provider we work with – to withstand the stresses caused by floods, droughts, and other climate change-induced challenges, as well as economic issues, political unrest, and public health crises.

Our experience has shown that change on this scale can only be achieved, and be sustainable, if it is driven and owned by the cities themselves.

While we are pleased to have played a role in making a positive difference across urban Africa – the real heroes are the cities’ leaders. In Antananarivo, change has come from the Ministry of Water, Energy, and Hydrocarbon, which sets the policies needed to realize a healthier future; from the utility JIRAMA, which has shown itself to be dedicated to serving all of Antananarivo’s residents; and from the Mayors of the city’s districts, who understand that improved water access is fundamental to their constituencies’ health, dignity, and prosperity.

Without clean, safe water, no city can develop sustainably. Without resilient service delivery, no city can withstand the stress of natural disasters. Without access to water and sanitation, no individual can reach their economic or social potential. At the time of writing, there is an outbreak of the plague in Antananarivo, the spread of which has been linked to poor water and sanitation in cities. Our partnership, and others like it, plays a critical role in building cities’ resiliency to withstand and thrive in the face of such challenges. In fact, The Coca-Cola Africa Foundation is making investments across the continent to address critical development challenges to community resiliency.

WSUP and The Coca-Cola Africa Foundation are proud of what we have accomplished to date and look forward to working together further – supporting city leaders in providing one of the most important building blocks of equitable urban life: clean, safe water that is affordable to all.