Occupy, Entrepreneurship and Why Businesses Must Evolve 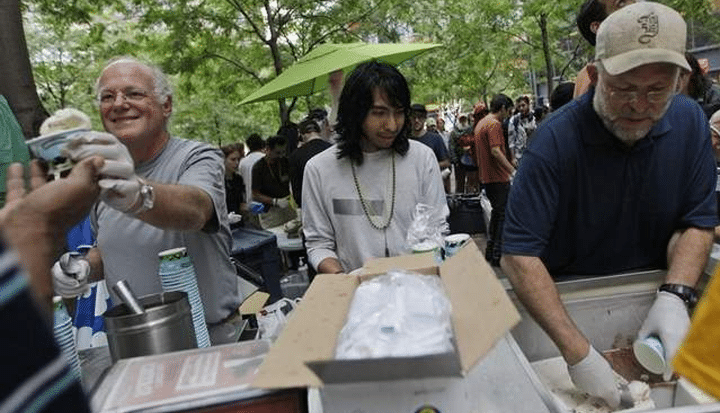 Occupy, Entrepreneurship and Why Businesses Must Evolve


In September 2011 what started as a social movement in a public space at Zuccotti Park in New York City, became an opportunity for those unsatisfied with the way things were to speak out and demand change. At the Ben & Jerry’s Board of Directors (which, by the way, is full of activists who first handedly understand the importance of getting arrested while protesting) we were adamant that we take a public stance to support the movement. While the media focused on the camps themselves, and any sensational stories they could, we as a company found an opportunity to weave together issues we had been involved with historically to build a case for us and potentially other companies to support the Occupy Wall Street movement. The similarities we envisioned included the issues: there is too much corporate influence in politics, the inequity that exists between classes is unacceptable, and that we were in an unemployment crisis with 13 to 14 million unemployed people in the U.S. and this was particularly challenging for the young. Ironically we also became the first company to support an inherently anti corporate movement angry at the excesses of Wall Street and overpaid senior executives.

We were proud to work with many of the Occupy leaders from Zuccotti Park on an ongoing basis, not only providing them ice cream scooped by our cofounders and board, but also bicycle-powered generators to power their phones and laptops as fuel-powered generators weren’t allowed. After organizing a press conference at the National Press Club in the nation’s capital to speak about our general support of the movement (and encouraging other companies to join us – none did), we coordinated Occupy leaders to bring their message to Vermont to speak to both Ben & Jerry’s employees and the Vermont media.

What we were witnessing in the United States at the time wasn’t simply a national issue – it was indicative of a global crisis. The Occupy movement was doing its best to focus on the core issues, however, as with any social movement there were tactical and operational challenges, and the Occupy movement was no different. Still, it’s hard to criticize how quickly the movement grew and solidified, how it highlighted the message of organizational greed by countries and corporations, and how it drew considerable interest across the world. We were impressed that the Occupy movement was led by young, thoughtful and intelligent activists who argued that it was time to speak out against the way things were.

This unrest and understanding of the greater challenges we face was impetus for the Ben & Jerry’s team in Europe to consider what their executional campaign focus would be in 2012 to address this global void of employment opportunity and recognize the potential of our youth. The idea was inherently to try to find the next Ben & Jerry’s, the next values led company that can create jobs, prosperity and address critical social issues.

Our first Join Our Core (JOC) event was held in London in 2012 with five finalists who were selected from nearly 200 entries across Europe as the best in class. The JOC effort was to support young entrepreneurs who believe in more than simply being successful at business, but also in incorporating a concern for the global community around them. The winning individuals would be featured on the packaging of a Ben & Jerry’s container, would receive a €10,000 Euro cash consideration, and would have ongoing professional mentoring, courteously offered by JOC program co-partner and global social entrepreneurial powerhouse, Ashoka.

We at Ben & Jerry’s have been extremely fortunate to have knowledgeable and valued partners throughout our history, and in this case it was no different. I’m not exaggerating to say that many of the winners were more excited to receive coaching from Ashoka versus the cash prize, or even being on their own tub of Ben & Jerry’s!

While the JOC program was designed to focus on helping young entrepreneurs, we know that we at Ben & Jerry’s have benefitted as much as anyone. The program has reminded us of the power behind having an idea, that business can exist and care about more than simply making a profit, and that there are entrepreneurs who care passionately about being a positive force for change in society.

In today’s Wall Street Journal, the first three stories I noticed included headlines with the troubling words: “Artillery,” “Captors,” and “Attack.” I’m proud to work at a business that believes that as we’re successful we can share that success with our global community. With that focus in mind, we will expand the Join Our Core program this year into three global hubs for Ben & Jerry’s including Europe expanding its program to include even more countries, as Ben & Jerry’s in both Singapore and Japan will host their initial JOC gatherings. Our cofounder, Jerry, will be on the road serving as the official JOC Ambassador, and I will proudly host the winners from across the globe here in Vermont at the Ben & Jerry’s company headquarters to explore how we can continue to support this burgeoning spirit, and to harness the power of young social entrepreneurs to remind us why existing businesses – with all the power that we have – must continue to evolve to better support and build prosperity in our local and global communities.

Are you under 34 and on a mission to change the world? Enter you social business to Join Our Core for a chance to win 10,000 Euros, mentoring from Ashoka and a trip to the Ben & Jerry’s HQ in Vermont. Head to www.joinourcore.com