Making a Better Life in Business 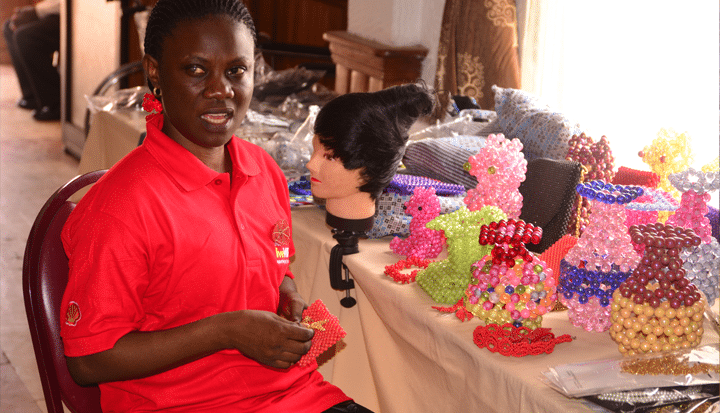 Make a Better Life in Business


Mbuotidem Okorie dreamt of having his own business, but his disability forced him to beg for a living without hope of work in Nigeria. A Shell programme supporting young entrepreneurs has helped him and others achieve their ambitions.

Without the use of his legs, and having no wheelchair or work, paraplegic Mbuotidem Okorie struggled to get around the streets of his hometown of Uyo on his hands, begging for food. It was a stark contrast to his dream of owning a shoemaking business.

“I was begging on the streets just to survive,” he says.

Nigeria suffers from very high levels of youth unemployment. For those with disabilities, finding work is particularly hard, and there is little social protection on offer.

From dream into reality

Mbuotidem was nominated by officials from his home state of Akwa-Ibom for the social investment programme called Shell LiveWIRE, which offers training and support to young entrepreneurs, helping them to turn ideas into successful businesses. The Shell Petroleum Development Company of Nigeria (SPDC) broadened the scheme in 2014 to focus specifically on people with disabilities. Around 180 disabled people took part.

Mbuotidem trained as a shoemaker through Shell LiveWIRE, which also provided him with a wheelchair. When he completed the course he received financial assistance to start his own business using his new skills.

Now he makes and sells shoes in his own shop. “I no longer have to beg,” he said.

Mbuotidem is one of around 5,700 young Nigerians to have benefited from Shell LiveWIRE since it launched in the country in 2003.

“The Shell LiveWIRE Nigeria programme is a first step on an exciting journey to success,” said Nedo Osayande, Sustainable Development and Community Relations manager at SPDC. “This is the first time the programme is focusing on people with disabilities. We are sure they will continue the successes of thousands of previous Nigerian participants.”

Agnes Udo, who is severely hearing and speech impaired, survived on the charity of friends and family until she took part in Shell LiveWIRE. She now runs a successful poultry farm, using her business training and start-up grant.

Thirty-year old Tom Ezekiel, who is blind, was unemployed before starting the training. Even before finishing the course, he too had opened a chicken farm.

“I was doing nothing before the training,” Tom says. “With the support of the programme, I am really pleased that I am now employed.”

Shell LiveWIRE also offers training for disabled people already in work who want to improve their skills or set up on their own.

Although 32 year-old Joseph Richard lost his sight when he was15, he manages a shop selling ceremonial beads that are an important part of Nigerian culture.

Joseph is now planning to set up his own bead-making company, a venture that could create employment for others.