No more promises without plans. It's time for a new corporate climate leadership. 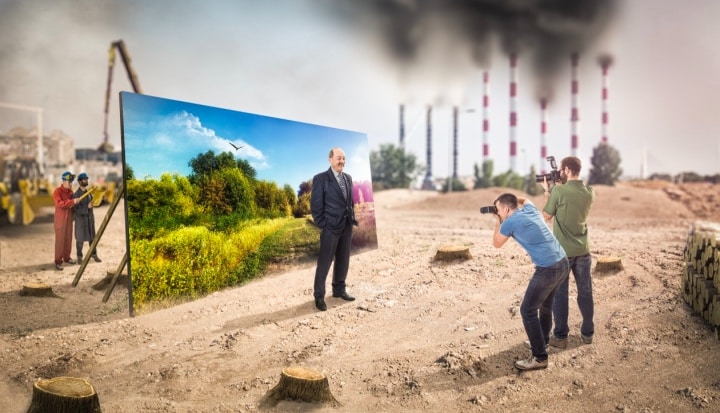 Edward Cameron and Emilie Prattico have co-authored a new book called 'The New Corporate Climate Leadership’. The dilemma in writing the book was to both celebrate the scale and diversity of private sector climate pledges; while also calling on companies to turn pledges into plans. To mark the publication of the book, here they share three key lessons for dynamic leadership.


Over the past 12 months, I have struggled with two competing thoughts:

In an attempt to reconcile these two competing thoughts, I co-authored The New Corporate Climate Leadership with my friend and colleague Emilie Prattico. Our dilemma in writing the book was to both celebrate the scale and diversity of private sector climate pledges; while also calling on companies to turn pledges into plans. The image of the Wall Street bull on the book cover captures our dilemma. The sculptor intended the bull to symbolize the innovation and can-do spirit of capitalism; but as we all know in English "bull" can have a very different meaning.

To mark the publication of the book on 6th December, here are three key lessons:

The new corporate climate leaders have a vision for 2030.

In our experience, too many companies have a one-dimensional approach to climate change, focusing almost exclusively on greenhouse gas emissions reductions. In addition, they seem preoccupied with scaling up a 2015 model of leadership, signing-up to targets and collaborations that are already obsolete. Instead, companies need to understand what leadership will involve in 2030 and adopt strategies that reflect this. In our view, a dynamic leadership in 2030 consists of three-dimensions:

One of the key takeaways from COP26 in Glasgow is the backlash against pledges and promises masquerading as plans. The British government was rightly accused of "spin" for claiming "the end of coal is in sight" when announcing a 190-strong coalition to phase out support for coal power. The reality of course is that only 18 countries are actually agreeing to phase out coal power, and they do not include 15 of the world’s biggest coal users. In fact, in the last decade middle income countries, who together account for 76% of coal use, added twice the amount of coal to their power generation mix as renewable energy. This is in part due to continued perverse subsidies flowing to coal and other fossil fuels. When all externalities are included the IMF estimates fossil fuels received $5.9 trillion in 2020 or $11 million every minute. G20 countries have provided more than US$3.3 trillion in subsidies for fossil fuels since 2015. 60% of the subsidies went to the companies producing fossil fuels and 40% to cutting prices for energy consumers. Meanwhile, 35 banks from Canada, China, Europe, Japan, and the U.S. have funneled U$2.7 trillion into fossil fuels since 2016. At this rate, fossil financing will hit $1 trillion per year by 2030.

Too many companies are also choosing to spin along, offering press releases instead of robust plans. According to the Climate Ambition Alliance, more than 1600 corporations have committed to net-zero emissions. However, research from the Energy and Climate Intelligence Unit found that only 11 of these have robust plans. Too many companies are relying on offsets instead of emissions reductions; too few count scope 3 emissions and are using creative accounting to baseline their GHGs; and many more broadcast a 2050 goal without any clarity on their plans for the coming five the ten years. This makes the targets seem like rhetorical commitments rather than real action.

The good news is that there are pioneers to learn from and solutions that are ready to deploy today. The recent CDP A List contains over 200 companies who are leading the way to net-zero. Moreover, a succession of IPCC reports dating back to the 1.5C report in 2018, provide hundreds of "solutions" that together provide a menu of options that can be used by every company. The new corporate climate leader realizes it has never been easier to be ambitious and offers plans not just promises.

The new corporate climate leaders have a consistent company strategy and not just a climate plan.

Investments consistent with climate strategy: 35 banks from Canada, China, Europe, Japan, and the United States together funneled $2.7 trillion into fossil fuels in the four years immediately after the adoption of the Paris Agreement (2016–2019). Many of these banks did so while signing up to climate commitments, especially those pledging 100% renewable energy use. The new corporate climate leaders decarbonize their investments as well as their energy use.

Consistent advocacy: The very same car makers who are now working to introduce electric vehicles have been aggressively lobbying to roll back fuel efficiency standards in the United States for years. In recent years, an oil and gas giant designed an industry standard on addressing fugitive methane emissions that, if followed by peers in the industry, would prevent 100m tonnes of methane from entering the atmosphere every year. And yet, at the same time, this same company lobbied intensively to weaken US rules on methane emissions. In 2017, the Business Roundtable asked the Trump administration to make cuts to a list of top regulations considered unduly burdensome to big business. Among those were ozone and coal-fired plant admission standards - the central provisions of Obama-era climate policies. Companies taking significant climate commitments were now seeking to undermine the very policy enabling environment that would help them meet their goals. The new corporate climate leaders are consistent in their advocacy, both within their own government relations departments, and also across industry groups.

Taxes not just targets: The noted corporate sustainability expert John Elkington has written that there is little point in cleaning up corporate fish if we then release them back into dirty market waters. Perhaps the murkiest water of all concerns the reluctance of corporate climate leaders to pay their taxes. Nearly 100 companies in the Fortune 500 had an effective federal tax rate of 0% or less in 2018. This meant the US government brought in about $74 billion less in corporate taxes than if all the companies had paid the statutory rate. The French tax economist, Gabriel Zucman, has estimated that by 2013 about $5.9 trillion – or 10% of global GDP – was held in tax havens, with at least three-quarters of it unrecorded. Repatriating this money, even at a rate as low as 5%, would produce over $250 billion in government revenues. The list of companies avoiding taxes comes from a wide range of industries and includes some of the most prominent leaders in the corporate climate movement. The new corporate climate leaders will end this practice of starving the public purse of the down-payment on a new climate economy.

There has been an explosion of corporate climate leadership during the past decade. This has been one of the most encouraging developments in our efforts to build a just and sustainable world. As we scale this leadership over the coming years, we must also encourage it to evolve. We must expand our vision, back our promises up with tangible plans, and pursue our goals with consistency.

The New Corporate Climate Leadership was published by Routledge on 6th December.