NGO Partnerships Give Businesses the Teeth to Be Social Activists 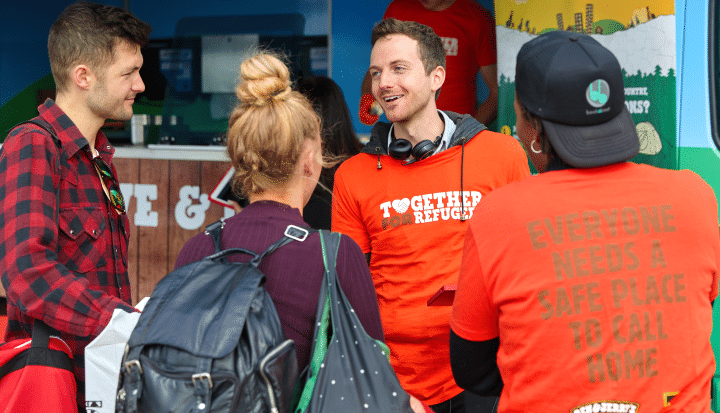 Ben & Jerry’s discuss mixing activism and a social mission and how by working with NGOs they can drive real change. They share insights on their partnerships with the International Rescue Committee on the refugee crisis.

Our CEO likes to say that we are a social justice organisation that happens to make ice cream. We campaign on climate change and we take on the US political system. We push for LGBT rights and we shout about systemic racism.

This is the legacy of Ben Cohen and Jerry Greenfield: two children of the 60s who thought that business could be a force for good. The values with which they opened their first café in 1978 are the same that guide this global company today. Ben and Jerry believed in peace, love and (Fairtrade) ice cream, as well as equality and justice, and in using everything you have to make the world a better place. And so today, Ben & Jerry’s is an activist business, using our tools and platforms to mobilise people and further causes.

Our theory of change is relatively simple. We are able to talk to a large, fairly young audience in a creative and accessible way, and then bring them into a movement with some simple actions. We’re an unusual voice – in pretty much any space – and we have a great product that draws people in. But we’re not experts in much except making ice cream, which is why our partners are so crucial.

The International Rescue Committee (IRC) is a great fit for us as a partner. We wanted to start working in the refugee and asylum seeker space and use our voice to address the pretty horrific scenes unfolding around us. The IRC has huge amounts of policy know-how, and were working on a getting a piece of EU legislation on refugee resettlement passed. This legislation, if passed in a good state, would ensure more safe and legal paths to Europe for refugees. Progress was good, but they needed a groundswell of public support across Europe to get it over the line.

Our resulting joint campaign, launched on World Refugee Day, was an opportunity for us to come together around a moment, to get ice cream fans involved in something tangible with a real impact, and to work to amplify each other’s efforts.

Being an activist business is still pretty unusual, but being a values-led business is far more common. Private companies are changing the way they work to drive (positive) social and environmental impact as well as profit. The values and the issue areas can be found either internally (what do the founders care about? What do the staff care about? What is our work most related to?) or externally (what do our consumers care about? What would be the most relevant issue for us to talk to them about?). Either way, it’s important to know what gives them credibility on those issues.

Finding a business with values and issue interests that align with yours is the first step. To make the most of the partnership, you then need to understand each other’s end goals. What does success look like? What KPIs are you reporting on? Like any partnership these will be different. For a business-NGO relationship, it’s even more important to understand why and how they’re different.

It’s also good to understand each other’s theory of change, and the resources that both will bring to the table. Can the campaign have access to the company’s consumer or market insight? Does the NGO have human stories for press and media? Probably more importantly – what gaps does each have and how can the other help fill those gaps? The success of the partnership will live or die on knowing each other’s respective weaknesses and strengths.

Businesses are more and more willing to speak out on social issues – look at all the companies that have spoken out against Trump’s travel ban, or Topman’s campaign on mental health, or BrewDog’s protest beer in partnership with climate campaigners 10:10.

Partnerships with NGOs give business the teeth and the sustainability to be successful activists. NGOs can absolutely take advantage of this momentum to achieve real social and environmental impact.

This article first appeared on https://www.bond.org.uk and is reproduced with permission.