Moving to the City 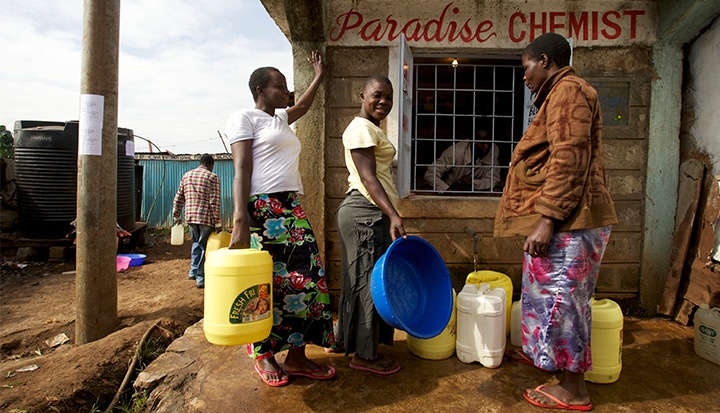 Moving to the City


Every second, two people move into a city. Across the world, that’s a million people every week. Many are in search of a better life but, when they arrive, what they find is not what they were expecting.

The world is driven by self-interest and nowhere is this more evident than in cities. Behaviour is driven by a web of influences and interests which is so complex, it is almost impossible to unravel. There are far more resources in cities than in the rural areas, but the competition for these resources is fierce and the fight is brutal.

When Peter, a vegetable farmer from rural Kenya, decided to move his family to the city in search of a better life, the informal settlements were the obvious place to go. They moved into a rented room in a plot of 8 single rooms.

The nearest available water was a kiosk 0.5km away. The kiosk operator had an illegal water connection and sold water at 8 times the price the utility charged their regular customers. After several months, Peter, with three other families, told the local Chief that they were applying for their own connection. The response - the threat of eviction if he did not continue to buy water from the kiosk.

We all aspire to a better life and Peter was no different. He was spending 25% of his income on water. He wanted the dignity of being a legitimate customer of the city’s water supplier, and access to its lower prices, but his recent encounter with the local cartel made this seem a distant possibility. He would never be able to afford the up-front connection fee, or the monthly bills; he lived in a world of small but fast moving cash – not a world of savings and bank accounts. And he would need proof of address, which the landlord couldn’t give him.

Steven, the Director of the city’s water company, knew he had the mandate to serve everyone in his city, but found himself constantly tied up with urgent matters: emergency network repairs, often in politicians’ constituencies, responding to calls from the Minister and the Mayor, public engagements, meeting with the banks that were financing flagship infrastructure projects…

The Regulator’s job was to ensure the Steven’s utility delivered on its mandate. They requested reports on revenues, costs, staffing and water losses, but not on whether the utility had served its low income customers. There was more; while external organisations pressed Steven to address the critical conditions in the slums, he found himself under discrete but insistent pressure from within the government to leave them as they were - the more desperate the conditions, the more foreign aid was mobilised.

So it was no surprise that Steven didn’t have a strong motivation to get services to Peter’s family. Breaking through the many barriers would require a more concerted effort and a greater commitment from the highest levels in the utility.

Then Peter’s luck changed. Steven was replaced by a new Director, who came with a vision to change things. The new Director had watched the mobile phone companies win thousands of clients with well-targeted tariffs and payment options, so he started designing tailor-made water services. He offered frequent payment options and phased connection fees. He set up a team dedicated to winning and retaining low income customers. Peter found himself targeted by this team and he soon became a legitimate and valued customer, buying safe water at an eighth of the previous price.

The new Director collected data to prove that serving informal settlements was viable – the utility was covering its costs. He also calculated that, with fewer illegal connections and better networks, serving these settlements actually helped him to conserve the city’s water supplies.

With this data, he was able to convince the banks to allocate a proper proportion of the city’s finance to serve the settlements. It was good for the customers, good for the company and it helped the banks honour their stated purpose of fighting poverty.

Peter’s life has been transformed. He is no longer seen as a “beneficiary” by the development community and a target by the cartels. He is beginning to build a better life for himself.

We must help cities to break away from the traditional monopoly mind set, recognise slum dwellers for who they are – legitimate and valued customers - not neglect them just because we don’t have time to find the right solutions for them.

We must help the development banks to re-discover their purpose and introduce flexible capital into their rigid financing arrangements, so there is enough funding to ensure low income populations are served.

We must convince governments that universal service coverage in cities is not only feasible, but can also save water, reduce costs and save carbon.

With commitment, the array of forces which stood in Peter’s way can be broken down, one by one. They can be analysed, understood and dealt with. It may be difficult, but Peter’s story proves that it is absolutely possible.