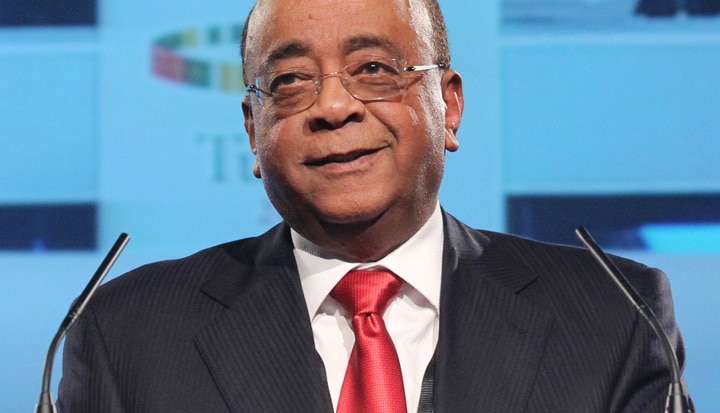 What do you get if you combine the youngest participant in the 2012 Olympics (13), ‘making agriculture sexy’ and the establishment of a business corruption index? The answer? Africa delivering on its promise and fulfilling its economic and social potential, according to the Sudanese-born, global mobile communications entrepreneur and philanthropist, Mo Ibrahim.

Recently returned from Co-Chairing the World Economic Forum in Africa, Mo led a meeting in Parliament hosted by CARE International and the Trade Out of Poverty All Party Group with his insightful reflections on what needs to happen to turn the challenges the continent faces into opportunities.

For Mo, the first ingredient has to be Africa’s massive demographic resource, ‘half of Africa’s population are really kids – these kids are better connected than my generation, and the rise of civil society is immense and irreversible.’

Mo pointed out that the oldest competitor in last year’s Olympics they came from Japan – while the youngest wasAfrican swimmer from Togo. This, he believes is Africa’s greatest resource. Europe and China have aging populations to worry about and face labour force shortages.

In addition to sheer numbers, Mo believes that the young have do not share his generation’s problem of ‘respecting our elders too much’ - which is a good thing, given that the elders were often more interested in maintaining their own positions of power rather than acting in the wider interests of society.

Mo and fellow panellist Lanre Akinola editor of the FT’s ‘This is Africa’ publication also made the point that while this untapped pool of youth is an asset, it also represents an enormous job creation challenge for governments and the private sector. If expectations aren’t met with some urgency, it could only be a matter of time before ‘the Arab Spring South of the Sahara’ happens. Some thought provoking comments were also made about Africa’s oft cited ‘entrepreneurial spirit’ and the fact that most of it is subsistence – born out of necessity not choice.

Mo believes that ‘agriculture should be the backbone of Africa’. 70 % of the population live off the land and Africa could feed itself as well as large chunks of the world given its availability of arable land. The trouble is, says Mo, that ‘we need to dispel the notion that agriculture is backward. It needs to be ‘sexy’.

Agriculture is not ‘sexy’ and Government’s throughout the continent have failed to prioritise and invest in this asset. Enrolment in agricultural colleges is woefully low, while land grabbing and ownership of land titles remain major barriers, the latter particularly, for women farmers. ‘There is a fine line,’ explains Mo, ‘between supporting commercial farming and kicking people off their land – we need to find models that work for all stakeholders’.

So what of the role of the private sector? As a self-made businessman, Mo unsurprisingly stated that he is ‘pro business’ but he also points out that corrupt politicians wouldn’t exist if there weren’t also corrupt businessmen and women. So, in addition to making sure companies pay their taxes in Africa (Mo asked why have we let them get away with this for so long?’), Mo is floating the idea that the OECD bribery index which aims to hold governments accountable for corruption (but which hasn’t led to any prosecutions in Europe), could be replicated for business.

This would take is leadership – and this is a subject that came up repeatedly. Lanre Akinola stated that ‘Africa has a lot of rulers and few leaders’ while Mo added that ‘there is a deficit of leadership in Africa’.

Mo is working hard to mentor future leaders, linking them up with key figures from the WTO, the African Development Bank and the UN. Ultimately he feels that Africa’s increasingly strong civil society will be the ones who hold governments and leaders to account most effectively.

When you look at the growth figures we were told that ‘Africa doesn’t need cheer leaders’ – it is resource rich and abundant in potential but it will take good governance to deliver on this promise. Still, having a committed champion of Africa’s future like Mo Ibrahim can’t hurt.