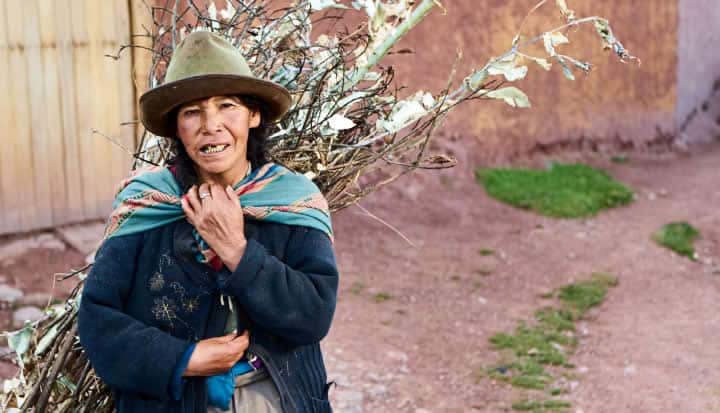 Photo: Peru has one of the world’s fastest growing economies, but also high inequality.


The development picture for this early new century is one of a world with fewer poor countries, but many poor people. Indeed, as the gap between rich countries and poor countries narrows, inequality within societies is on the rise. This major shift in the global profile of poverty is raising fundamental questions about the future of development aid.

While Europe and America struggle to shake themselves out of economic stagnation, many developing economies are expanding rapidly. The growth of the developing world is one of the great news stories of our time. From China to Brazil, hundreds of millions of people have been lifted out of poverty. The official number of poor countries, as defined by the World Bank, is falling steeply, from 63 in 2000 to 35 today.

This cut on the figures is belied by a more complex story. As nascent, ‘middle-income’ countries – such as India, Vietnam, Egypt and Nigeria, with per-capita incomes greater than US $1,000 per year – develop, millions of their citizens remain trapped in poverty. Take Peru, which enjoys one of the world’s fastest growing economies, with average incomes equivalent to those of Western Europe in the early 1980s, but where many people in the Andean highlands still live on only a few dollars a day.

In short, the locus of global poverty is increasingly found in ever more prosperous, but often highly unequal societies. Some three-quarters of the world’s poor currently live in middle-income countries, compared with only seven percent in 1990. Meanwhile, the economies of traditional aid donors are in turmoil, and governments are having to work harder to justify aid budgets. In this context, sending aid to middle-income countries is often a difficult sell. Witness the recent clamour in the UK to end aid to India, with one British tabloid declaring it “the country rich enough to have its own space programme.”

Not surprisingly, many donors are narrowing their focus to a smaller group of the world’s poorest countries. Already, much of Asia and all of Latin America – except Haiti – is ‘middle-income.’ A few African countries – including Angola, Cameroon and Ghana – are there also, with many more on the threshold. Five to 10 years out, it is not hard to imagine a world in which donors limit their direct support to countries suffering natural disasters and a handful of the most fragile states, such as Somalia, South Sudan and Afghanistan. And this would mean that the vast majority of the world’s poor would be beyond the reach of aid.

This is a viable model if the governments of middle-income countries are themselves able to tackle internal poverty. However, the scale of the challenge in many of these countries is enormous. A 2010 estimate put the number of extreme poor in India at the same level as that in the 26 poorest African countries combined. Moreover, the poverty-fighting commitment of many middle-income governments is questionable at best. There is a distinct risk that if donors withdraw, a global underclass of millions will be left with little prospect of support at home, and ineligible to receive development assistance from abroad.

Of course, development aid will only ever be part of the solution: private sector investment, fair trade, and new technologies are all critical. But aid has an indispensable contribution to make. To be most effective, aid to middle-income countries must go beyond traditional forms. Building hospitals and schools will remain essential, but the focus should be on building the supply and demand for social justice. That means working with civil society groups that help the poor to secure a fair share of resources from their government, and helping governments, through ‘rights-based’ development programmes, to implement progressive policies that redistribute wealth. As the problem becomes less about lack of resources, and more about the fair distribution of resources, aid must increasingly be targeted at those organizations and institutions that can demand and deliver this.

And as big business plays an ever greater role in developing countries, civil society actors must work with companies to ensure that their operations benefit rather than exploit the poor.

In Peru, NGOs, with donor support, have been helping local associations of poor women to lobby district authorities for better maternal healthcare. NGOs are working with the national government to reform its social policies, and bringing mining companies and communities together to strengthen the local population’s say in how mines are run. Such programmes can yield lasting results, but require a long-term commitment, as they involve changing entrenched practices and attitudes.

Making the political case for continued aid to middle-income countries will not be easy, but it is crucial that donors stay the course. Despite the progress that is being made, it would be a mistake to think that the growing number of developing countries following the Peruvian path can and should tackle their domestic challenges alone.

This article first appeared in the Spring/Summer 2012 issue of Global Brief Magazineand is reproduced with permission.