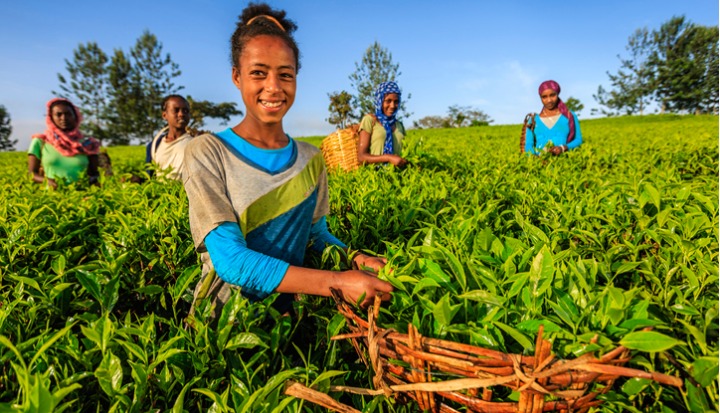 In October, THIRST organised a discussion to learn from Oxfam’s Juliet Suliwa and COLSIBA’s Adela Torres and Iris Munguia how unions in the Latin American banana sector have been successfully opened up to women, and how Malawian tea unions are starting to do the same. Read more in this article from Sabita Banerji CEO of The International Roundtable for Sustainable Tea


“We are worried everyday regarding our children. It has become very difficult to run the family with this little wage.” “The government has provided us shelters recently. But how can humans live in a 16 ft home? They are more suitable for cows and goats.” These are the words of women working on tea estates in Assam (East Mojo).

A Malawian tea farmer “may spend six hours a day caring for her children and other relatives, walking for miles to a water point, fetching firewood, buying and preparing food, picking up the children from school, etc” (Ethical Tea Partnership)

And in the Latin American banana sector; “Often working 14 hours a day without overtime pay, women lack the freedom to organise, without their rights being respected. Women are sacked for being pregnant, have no ante or post-natal maternity rights and many suffer sexual harassment in the workplace, while high levels of toxic agrochemical use puts pregnant women and nursing mothers at high risk of negative health impacts for themselves and their (unborn) children.” (Bananalink) The Ethical Trading Initiative (ETI) points out that “It can be very difficult for a single worker to speak to management about a workplace problem… and to resolve their difficulty individually – assuming they even have the confidence to raise the issue.” Women who belong to cultures in which, as Oxfam’s Juliet Suliwa put it, they “…automatically feel men should be in charge, feel less important than men…” are highly unlikely to have this confidence – or to be heard if they do find the courage to speak out. ETI goes on, “Unions work on the principle that if all workers speak with the same voice, their concerns are more likely to be addressed.” Yet many trade unions are simply not set up to accommodate women. In October, THIRST organised a discussion to learn from Oxfam’s Juliet Suliwa and COLSIBA’s Adela Torres and Iris Munguia how unions in the Latin American banana sector have been successfully opened up to women, and how Malawian tea unions are starting to do the same.

It’s been a long, hard journey, but it’s starting to pay off in Malawi – and good progress has been made in Latin America. In Malawi, Oxfam has helped the Plantation and Agricultural Workers Union (PAWU) establish women’s committees in all 150 divisions of its nine plantations. These inform women how (and why) to join the trade union, resulting in a 6:4 balance of men to women. And in Latin America , “women trade union leaders now have a clear voice in the World Banana Forum and have a place with international bodies such as the IUF and with the Chiquita brand.”

There were three key elements that drove progress; opening up trade union structures to women; training for women and men on the importance of including women in trade unions, and collective bargaining that addressed women’s issues.

Tea buying companies involved in the Malawi 2020 Programme supported the collective bargaining process and paid better prices which helped improve all workers’ wages and played a strong role in making social dialogue work for women in the Malawi tea sector.

And in Latin America the tactic was “…to get all companies around the table so that it is a sector wide, national agreement. This made the negotiation tough and quite long but what was negotiated was then applied to all work places. The employers being involved means it is a substantial agreement.”

The collaboration between women workers, trade unions, producer and buying companies was critical to success in both regions.

But it also took a great deal of courage, determination and hard work by women like Adela and Iris – banana workers themselves; “As a woman leader,” said Adela “it was difficult to get to the negotiating table with employers and for women to become members of an exclusive male club of the bargaining team took a long time.”

Yet they persevered, and today collective bargaining clauses specifically designed to address women’s issues are regularly negotiated with companies. Women in Malawi now feel free to apply for jobs in tea factories and offices. Sexual harassment has significantly reduced and women know how to report it if it does happen. In the banana sector, medical kits now include sanitary towels; and there are now toilets in Malawian tea fields where women can have some privacy. And there are now shelters for pregnant or breastfeeding women to rest.

It’s not everything, but it’s a start. Compare these conditions with those described at the start of this article. Which is more likely to result in a stable, motivated, productive workforce? Which is likely to attract the best workers? Which is less likely to attract negative media or NGO attention? And which would you feel more comfortable having as part of your supply chain?