Inviting Men to Make a Difference: the #HeForShe movement 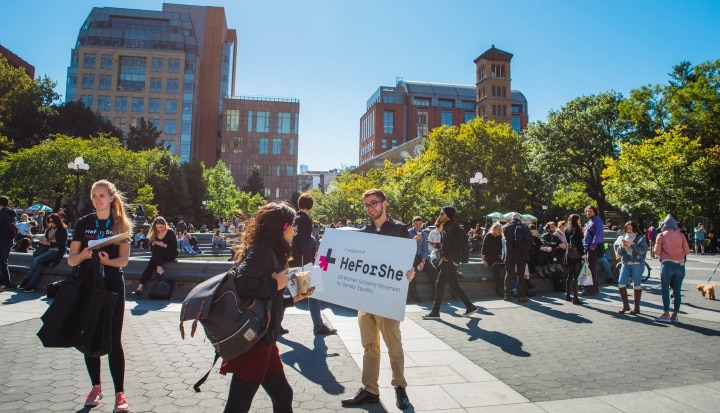 Engaging men as allies can be a powerful accelerator to help companies, governments and institutions achieve gender equality. Elizabeth Nyamayaro takes us behind the scenes of how UN Women built a worldwide network of men who are championing SDG 5 – the gender equality goal.​


The case for gender equality is clear with estimates that £28 trillion could be added to the global economy if women participated equally. Yet according to recent reports, no country is expected to achieve full gender equality by 2030. Our ongoing Business Fights Poverty Challenge with AB InBev, CARE and Stanford University’s VMWare Women’s Leadership Innovation Lab suggests that Engaging Men as Allies to advance gender equality is key to achieving lasting change. As part of the Challenge, we interviewed Elizabeth Nyamayaro, Global Head, HeForShe to find out how UN Women have enrolled more than two million men in every country in the world to pledge their commitment to gender equality, as well as involving companies, governments and institutions in this unprecedented global movement.

Why and how did UN Women launch HeforShe?

‘Back in 2014, when we were trying to understand why gender equality was stalling, we realised that for too long men have been seen as part of the problem. It was time that they became part of the solution. After all, we cannot achieve societal change if one half of the population is not included’.

Early on in her role, Elizabeth identified several reasons why men were not engaging, including fear and misperceptions, and she quickly noticed that the dialogue had to change. HeForShe was therefore framed positively and aimed to bring men into the conversation in an inclusive way. Elizabeth also realised that it was essential to enable people to take action through simple and clear commitments. It turned out that her intuition was correct, the positive language mobilised people and created a sense of solidarity between men and women.

What happens if an individual or company pledge to support HeForShe?

HeForShe is about building awareness of the individual and organisational benefits of gender equality. To help people engage at an individual level, HeForShe and PwC developed an interactive 35-minute online course, ‘Building Gender IQ’, on the benefits of gender equality and why it matters. Individuals and organisations are encouraged to make commitments, including, for example: ‘I commit to reviewing our hiring practices to make sure that there is no gender bias in how we advertise for and hire new staff’. Members of the Corporate IMPACT group have each made three bold commitments towards improving gender equality in their organisations, e.g. Barclays have committed to reach 2.5 million women with financial services, increase the senior leadership of women by a percentage point each year, and embed gender equality across the culture, policies and processes of the organisation.

What have been some of the key lessons learnt when it comes to effectively engaging men?

Elizabeth highlighted two things in particular. Firstly, ‘In order to be truly transformational, change needs to be bottom-up and top-down. While it is crucial for world leaders and CEOs to embody the message, it is also important to get everyone to be involved’. Social movements are successful if people feel they belong to a tribe. This was exemplified in a map UN Women posted on its website for men to demonstrate their commitment in their communities. They could see how they were part of a growing movement of men standing up for gender equality.

Secondly, Elizabeth emphasised the power of partnership. UN Women quickly realised that HeForShe had to build on the many years of work undertaken by women’s rights activists and other partners if it was to be effective. UN Women is also adamant that they can’t solve gender equality issues alone and work closely with companies, governments and other institutions to advise on their gender strategies. Elizabeth feels that UN Women’s true value proposition to companies is its access to a large network of local NGOs and leading experts on gender equality that can advise the private sector with implementation and delivery.

Can you give us some examples of where HeForShe has made an impact?

Elizabeth feels that the most striking example is perhaps Malawi, which outlawed child marriage within 15 months of making its commitment to HeForShe, coupled with an enormous amount of awareness and activity at the local level which effectively eradicated child marriage in communities. There have also been some great examples from the private sector. PwC went from 18% female representation on their Global Leadership Team to 47% in just 15 months (by implementing measures such as executive sponsorship, leadership commitment and accountability, data-driven decision making, strategic implementation and continuous monitoring).

What tools has HeForShe created that could help companies take action?

Elizabeth Nyamayaro is a political scientist and senior advisor to Under-Secretary-General and Executive Director for UN Women. Nyamayaro is the head of HeForShe, a movement founded by UN Women to empower all humans, especially men and boys, to have a voice and take action to achieve gender equality in their own lifetime.In the past two decades, Nyamayaro has held positions at UNAIDS, the World Health Organization, the World Bank and Merck.