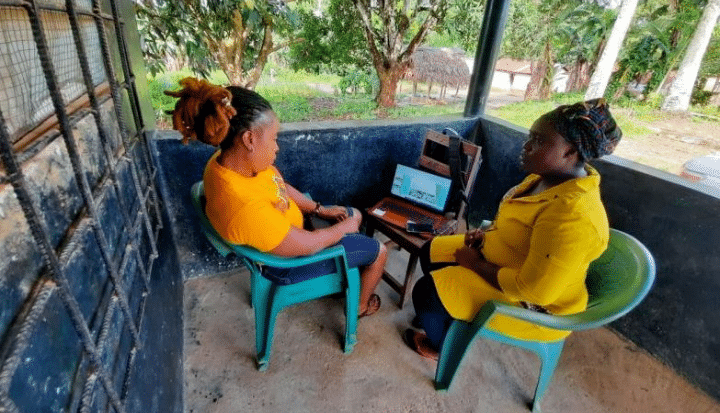 Four lessons from GROW on how to sustain and scale inclusive business models to address the economic and the non-economic constraints women face.


Even a successful inclusive business model does not automatically eliminate long-held prejudice and bias against women.

“Supporting women in agriculture is the right and smart thing to do” - this has been our motto at GROW Liberia for the last five years. But what does this mean in practice? How do you convince partners - many of whom hold deeply engrained prejudice against women in professional roles - to get on board? What are the limitations of inclusive business strategies? These are the questions we’ve been reflecting on as the programme comes to an end in our report Do inclusive business models close the gender gap?

One example of this is our work to boost access to affordable agro-inputs and advisory services for male and female farmers - against a backdrop of persistent gender gaps related to agricultural inputs.

Our own research showed that while almost 60 per cent of Liberia’s vegetable farmers are female, on average women made up less than a third of the client base of Liberian agro-input dealers - suggesting a large untapped market.

So we worked with over 20 agro dealers to move sales outlets from shops located in urban centres to stalls at weekly markets (very much a female domain in Liberia). To this we added a sales agent model, including both male and female agents, providing farm-level advice and training to farmers alongside the sale of inputs. The message was clear: better serving female farmers and providing them with tailored advice is good for business.

It worked. Agro dealers increased their annual sales by 77 per cent and almost doubled their customer base to 17,000 farmers. And we were excited to learn that agro-dealers’ female clients grew by 120 per cent, suggesting we were making the first careful steps towards closing the gender gap in the availability and uptake of agricultural inputs.

There is plenty of evidence of the business case for gender equality, as well as guidance on how to quantify commercial incentives within economic development programmes. However, we know a lot less about the tactics programmes use to garner the interest of private sector partners to adopt inclusive business models.

At GROW we put a lot of effort into supporting our partners to keep records on sales, expenses, inventory and profitability. Agro-dealers, mostly small and informal enterprises, saw for the first time the amount of seeds, fertiliser and equipment they sold, and who their clients were. To ensure that agro dealers continued to collect data on their clients, we put some intial performance-based incentives in place. Everyone loves a competition in Liberia and prizes could be won for the largest increase in customers or the largest proportion of female clients.

In time, it was the data itself that motivated change in behaviour and questioned long-held business assumptions.

Test, investigate, refine - and repeat. No business case or inclusive tactic will ever be perfect

As much as we’d wish for it, there is no blueprint for the business case to close the gender gap in agriculture.

Country and sector context matters, and so do the specific constraints female farmers face. We didn’t have all the answers when we started, so we used data to test, investigate and refine inclusive business models in different sectors.

For example, GROW’s monitoring data showed that only one in five cocoa farmers trained in good agricultural practices were women. Typically, male farmers attended the training sessions, but did not share what they had learnt with other family members.

Reaching women - largely invisible family labour on male-owned farms - is not just a question of fairness, but matters for cocoa quality. And cocoa quality in turn allows farming families to get a better price for their harvest.

So we made changes. We clearly communicated (via male community leaders and cooperatives) the importance of female farmers for quality cocoa, made sure training times worked for women and supported cooperatives to hire female outreach workers and trainers. These efforts paid off! The proportion of female farmers trained increased from 21 to 36 per cent and we learned that including women in good agricultural practices training translated into 36 per cent higher cocoa yields for farming families.

A call for addressing the 'non-economic' in economic development

We saw how inclusive business models enabled the economic participation of women and raised incomes, whilst also benefitting GROW’s partners.

But some challenges remained, and inequalities persisted. We witnessed how some agro-dealers continued to perceive female sales agents as 'weak', 'unable to deal with stress' and 'run away', despite plenty of evidence to show that women were more than up for the job. We learned how what we assumed was a drop-out of female outreach workers and trainers was in fact their male colleagues wrongly recording names of trained cocoa farmers under their own name (and being rewarded for it) as they kept records on behalf of their largely illiterate female colleagues.

So, if we are serious about closing the gender gap in agriculture we need to acknowledge how underlying structural barriers and inequalities, such as low female literacy or a largely female responsibility for unpaid care, affect women’s access to economic opportunities.

We need to be realistic that even a successful inclusive business model does not automatically eliminate long-held prejudice and bias against women in professional roles or dismantle unequal power relations between men and women.

In other words, to sustain and scale inclusive business models we must address the economic and the non-economic constraints women face (if such a distinction even exists in practice). In this way we not only enable women to be sales agents or supervisors, but we do our best to make sure they are valued members of more equal societies able to do their work, safe from harassment and with dignity and respect.

This article was first published on BEAM Exchange and is reproduced with permission.