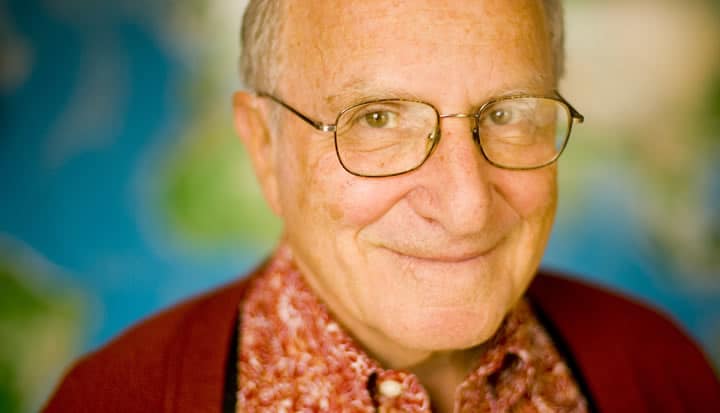 On the International Day for the Eradication of Poverty, we remember the life and impact of Paul Polak, Market-Based Development Pioneer, who sadly passed away on 12 October.


We were greatly saddened to hear the news of the death of Paul Polak, a pioneer of market-based development, on 10 October 2019.

Paul’s mission was to inspire a revolution in how we tackle poverty – showing how market-based approaches to development can benefit the 2.7 billion customers who live on less than $2 a day. In the last 35 years, the non-profits and businesses that Paul founded have helped more than 50 million families out of poverty through the intentional design of scalable, radically affordable business models. On this day – the International Day for the Eradication of Poverty – it is a fitting moment to reflect on Paul’s journey and impact.

Paul was born on 3 September 1933 in Prachatice, Czechoslovakia. At the age of six, he and his family fled to Ontario, Canada to escape the Nazis and the onset of World War Two. Despite his humble beginnings as a refugee, Paul went on to study Medicine, receiving his MD from Western Ontario University. After practicing Psychiatry for 23 years in Colorado, Paul was inspired by a trip to Bangladesh to change the course of his career to serve the millions of people globally living on less than $2 a day.

As a Psychiatrist, Paul visited the homes and workplaces of his patients to better understand the challenges they faced. Paul applied this same radically simple approach to understanding the problem of poverty, talking with farm workers and refugees in countries such as Bangladesh, Somalia, India, Cambodia, Ethiopia, Myanmar, Nepal, Vietnam, Zambia and Zimbabwe about their lives and the obstacles they faced. Believing passionately that people can help themselves if you address their constraints, Paul set out to design and produce low–cost, income–generating products, such as $25 treadle pumps and $3 irrigation systems, which enabled people to double their income and lift themselves out of poverty.

For over three decades he pioneered a radical market-based approach, as founder and CEO of the non-profit International Development Enterprises, which has helped increase poor farmers’ net income by $288 million annually, and more recently through Windhorse International, a for-profit social venture that creates products for low-income earners; Spring Health, a for-profit offering affordable drinking water to the rural poor in India; D-Rev, a non-profit which promotes design to benefit the other 90%; and Transform Energy, which is finding ways to replace coal with alternative fuel sources. He wrote two books, Out of Poverty and The Business Solution to Poverty (co-authored with Mal Warwick) which was named as one of the Economist’s Top 10 Business Books 2013. The Atlantic Monthly named him one of the world’s Brave Thinkers, alongside Steve Jobs and Barack Obama in 2009; Scientific American has recognized him as one of the World’s 50 leading contributors to science; he also received the 2008 Florence Monito Del Giardino award for environmental preservation.

Paul was motivated by the moral imperative to urgently transform the situation of millions of people in extreme poverty. To achieve this, Paul recognised the need to design for scale from the outset, designing for the 90% by speaking to at least 2,500 customers earning less than $2 a day before starting any product design process, and designing technologies and business models which are “ruthlessly affordable” on a low margin, high sales volume models. In this approach, product design is only 10-20% of the picture; 80% of entrepreneur’s efforts need to be focused on creating market-based solutions to distribution in the remotest of areas, and to design innovative branding and marketing campaigns which are both aspirational and educational.

As the father of market-based approaches to development, Paul Polak’s work demonstrates the transformative potential of placing social purpose at the heart of business. In a recent interview with Business Fights Poverty, he urged companies to grasp the opportunity to embrace new markets and products which help generate income for the world’s poorest and shared his excitement about his new venture, finding new sustainable energy solutions to help eradicate poverty and tackle the climate crisis.

My team and I at Business Fights Poverty were honoured to have collaborated with Paul on a number of occasions, and to have him as part of our community. We offer our deepest condolences to Paul’s family, in particular his wife, Aggie, his daughters, Amy, Kathryn, and Laura and his two grandchildren, Elena and Ethan. Those of us who follow in his footsteps will remember the candour and generosity with which he shared his wisdom, and will continue to be inspired by his example.