How a Sanitation Waste Partnership is Transforming Cities in Bangladesh 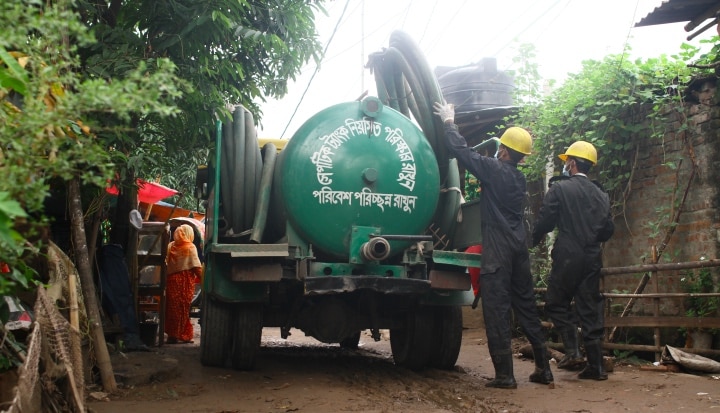 After four years of testing how entrepreneurs can deliver sanitation services to the poorest urban citizens in Bangladesh, a business model developed by Water & Sanitation for the Urban Poor is starting to create significant change. To mark World Toilet Day, we are reflecting on how this business model is achieving what very few other approaches have achieved: financially viable sanitation services which benefit low-income residents.


SWEEP, a simple yet highly effective public-private partnership model, was launched in 2015 in Dhaka. This model has enabled the private sector to enter the sanitation market, which they previously viewed as high-risk and low-margin, and entrepreneurs can now deliver profitable waste collection services.

The model addresses a major environmental and health issue in urban Bangladesh - the lack of sanitation waste management. Nearly half of the 60 million urban residents lack access to sanitation facilities which enable faecal waste to be safely collected and removed for treatment.

Dhaka is the only city in Bangladesh with a sewer system, but only 20% of its population, mainly in high-income areas, is connected. With the lack of sewerage connections, residents rely on septic tanks and pit latrines – these need regular emptying. A service to empty the waste from toilets and transport it for safe treatment is simply not available in most urban communities.

As a result, residents have no choice but to dump their waste into open canals and rivers or they employ manual emptiers who dump it unsafely in the local area. This has a devastating impact on people’s health and poses serious environment risks.

With the rapid population growth, governments and utilities struggle to get the resources that would enable them to deliver services at the scale required to serve everyone in a city. SWEEP has been able to provide a solution to this challenge, by bringing in the private sector.

Having piloted the service in Dhaka, the model has been replicated in Chattogram and Rangpur involving four entrepreneurs. Nearly one million people have so far directly benefitted from the service. However, this is only about 4% of the market, indicating a huge opportunity for businesses to grow.

Factors behind the success of the model

Three important factors help to explain how the SWEEP model has achieved success:

The public-private partnership with shared roles and liabilities acted as a catalyst in correcting market failure. This partnership made it possible to lower the barriers to entry, enabling entrepreneurs to provide an emptying service on a commercial basis. Easy access to the market and acceptability of the service by customers were a bonus.

Commercial viability played the key role in the sustainability and growth of the model. It has made the private sector confident to invest in sanitation businesses and it has made the public sector more open to a public-private partnership arrangement. It has also turned sanitation waste emptying and disposal into decent work with fair pay, workplace safely and dignity.

WSUP is committed to assisting the enterprises who are operating SWEEP contracts to build their capacity and increase their ability to provide services throughout different city segments. We will do this through training and business analysis support, alongside general guidelines on faecal sludge management (FSM).

With new regulations introduced in 2017, which clarified the public sector’s responsibilities on delivering non-sewered sanitation, we have seen a marked increase in how city authorities provide sanitation services.

As a result, we see an excellent opportunity to build on SWEEP and enable more entrepreneurs to deliver safe, affordable, profitable sanitation services in cities across the country.