GRADIAN I: Spinning Out A Commercial Entity From A Nonprofit Foundation 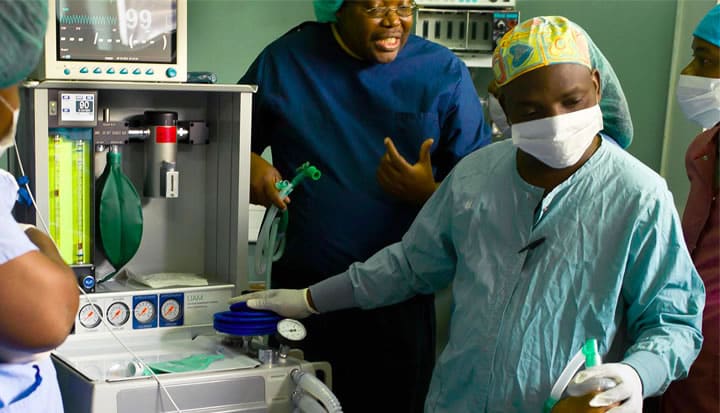 GRADIAN I: Spinning Out A Commercial Entity From A Nonprofit Foundation

Globally, 2 to 3 billion people lack access to adequate surgical care.1 Of the more than 230 million major surgical procedures performed worldwide each year, patients in low- expenditure countries receive just 3.5 percent of the total, even though they account for 34.8 percent of the global population.

Within many developing countries, emergency and essential surgical services are largely available in cities, where they are reserved

An example of the suboptimal anesthesia equipment that is common in low-resource environments primarily for individuals who can afford them. Despite the fact that surgery can address 11 percent of the global disease burden and has been shown to be a cost-effective inter- vention, it remains severely under-resourced. Accordingly, surgery has been dubbed the “neglected stepchild of global health.”

Effective anesthesia administration is paramount to operating room success. Yet, 35 million surgeries are performed with substandard anesthesia every year. Too often, hospitals in developing countries do not have adequate infrastructure and equipment to support safe surgical and anesthesia procedures. Although many facilities either purchase or receive donations of conventional anesthesia machinery that is used in hospitals in more developed countries, these devices are often inappropriate for the realities of low- resource surgical settings. According to some estimates, hospitals in developing regions experience an average of 18 power outages per month. They also face regular shortages of compressed medical oxygen. Either of these problems will cause conventional anesthesia machines to shut down, creating devastat- ing consequences for patients. Moreover, when conventional equip- ment malfunctions or breaks, hospitals in low-income settings fre- quently cannot get replacement parts and/or have no one qualified to perform the necessary repairs.

In 1986, Dr. Paul Fenton, a British anesthesiologist, accepted a posi- tion as Head of the Department of Anesthesia at a busy teaching hospital in Blantyre, Malawi. Unlike some Westerners working in sub-Saharan Africa, Fenton was not simply a visiting doctor; he spent 15 years in Malawi and gained extended exposure to the many challenges that surgeons and anesthesiologists face in low-resource settings. By 1991, he was fed up with the regular, unnecessary inju- ries and deaths that resulted when surgeries were interrupted or canceled because his department’s anesthesia equipment was unusa- ble or unavailable.

Fenton recognized the need to design an anesthesia machine that could function in any environment, even in the midst of a power outage. His ideal device would also generate its own oxygen, elimi- nate reliance on cylinder or pipeline gas, default to room air if no other oxygen was available, and include oxygen monitoring to en- sure the safety of the gas mixture. Frustrated that such a device did not exist, he assembled a prototype using parts from the discarded anesthesia machines that the hospital had amassed. Around 1999, he had a strong working model that he dubbed the Universal Anaesthesia Machine (UAM).

Fenton began using the prototype in his hospital in Malawi. When he saw how well the device performed in this environment, he sought to expand production so that other health facilities could benefit from the device. Unfortunately, Fenton was unable to convince investors to provide funding so he could further develop his innovation. He was also unsuccessful in identifying a buyer or licensee to bring the idea forward. At the time, those he spoke with were either hesitant to get involved in a business based in Africa, or they did not perceive an anesthesia machine targeted at low-resource areas of Nepal. When he told the foundation about the UAM, its leaders were intrigued. Through their experiences in the field, they understood the need for contextually appropriate anesthesia equipment, and they saw the UAM as a logical extension of their work. Accordingly, the foundation offered to provide seed funding to further develop and test the device.

The UAM was designed very distinctly to not be a ‘poor person’s machine’... People took to [it] really well in both the U.K. and Nepal.

Fenton and the foundation identified a partner called OES Medical, a manufacturer of anesthesia equipment in the U.K. OES had extensive experience and engineering expertise in the anesthesia field, along with a similar commitment to the project. After developing a new version of the UAM and taking it through the European Union’s CE certification process for medical device regulatory clearance, the project team healthcare providers to be commercially viable. Fenton would have to find another way to fund further development of the UAM.
Fenton retired in 2001, and it was not until several years later that an alternate model for bringing the UAM to market presented itself. In 2009, he was asked to consult for the Nick Simons Foundation—a private philanthropy supporting the Nick Simons Institute, which trains health workers to address needs in remote areas of Nepal.10 The Institute was launching a training program for mid-level anesthesia providers and wanted Fenton to help shape the curriculum, since he had founded a similar program in Malawi. In a meeting with the foundation’s benefactors, Fenton discussed the many infrastructure and equipment issues that the trainees would inevitably encounter as they worked in the rural placed one machine in a U.K. hospital and four machines in hospitals in rural Nepal. Crucial to the UAM’s success was its effectiveness in all environments—from resource- constrained health facilities to developed Western hospitals with the highest performance standards. “The UAM was designed very distinctly to not be a ‘poor person’s machine,’” emphasized Erica Frenkel, who later became involved in the project.11 She continued, “The proof of concept was successful. People took to the machine really well in both the U.K. and Nepal.”

ONE CHALLENGE: SPINNING OUT A COMMERCIAL ENTITY FROM A NONPROFIT FOUNDATION

The Nick Simons Foundation was convinced that the UAM could address an important global health need, and the family expressed a willingness to help bring it to market by spinning out an organization from the foundation—which would be known as Gradian Health Systems—to dedicate itself to this goal. However, numerous questions remained about how to structure this organization. The challenges of bringing a device to market were well outside the purview of the foundation’s previous work, and there were few (if any) precedents of private foundations getting involved in similar projects that the organ- ization could follow.

More than anything, “The foundation needed a model that would be in line with its mis- sion,” said Frenkel. Gradian became a wholly-owned subsidiary of the Nick Simons Foundation in 2010. As the foundation tried to figure out the direction Gradian would go, its leaders established a legal structure that would afford them flexibility and protection; to guard the foundation’s assets from the liability risks associated with any medical device company, Gradian was set up as a sole member limited liability corporation (LLC).12 From a tax perspective, the organization was considered a “disregarded entity,” which meant the IRS would “disregard” the company as being separate from its owner to allow Gradian to operate as a nonprofit.

As a next step, the foundation hired a management team for Gradian that would design the business model to support the new endeavor. It chose Stephen Rudy, who joined as CEO in March 2011, for his deep expertise in the medical device industry. Frenkel, who became Gradian’s Director of Business Strategy, was hired next to complement Rudy’s business and technical background with her breadth of experience in the global health field. Together Rudy and Frenkel considered numerous hybrid models for structuring Gradian’s approach. “We called it the ‘Wild West’ when we were first getting started,” recalled Frenkel. “Everything was just so open-ended and unprecedented.”

While the foundation decided early on to make Gradian a nonprofit, its leaders were open to using market mechanisms to help the organization sustain a scalable operation and achieve the mission of making appropriate and affordable anesthesia equipment available to the widest possible audience. “Previous thinking suggested that to be a non- profit working in this space you had to just donate machines and all the peripheral ser- vices they require—that there was no way to use pricing and sales to build the organiza- tion. We felt strongly that a nonprofit could incorporate traditional business strategies,” Frenkel explained.

Ultimately Rudy and Frenkel determined, with the foundation’s support, that Gradian would seek to cover the UAM’s manufacturing and production costs by selling the UAM to nonprofit organizations and governments at roughly its manufacturing cost. This would ensure that the company could scale as the team started building demand for the product. “If you’re giving away the machines, you can only produce as many as your budget allows. But if you’re selling the product and covering your costs, you can pro- duce and distribute as many as the market requires,” Frenkel noted. The funding from the foundation would be used to support other aspects of getting the business off the ground during its first few years in operation. In addition, the foundation saw an opportunity to expand its commitment to health care worker training through Gradian. “The foundation provides philanthropic funding to train users and support a complete and ongoing service infrastructure, which are at the core of Gradian’s mission,” Frenkel said.

As the company grew, representatives from the foundation stayed actively involved in Gradian’s efforts. “We’re in the same offices so we have regular meetings with them. And our board includes a number of leaders from the Nick Simons Foundation,” Frenkel explained. “This means that we frequently discuss our evolving plans for the company and get advice and feedback from them.”

Still, Rudy and Frenkel had to carefully evaluate the implications of every major deci- sion relative to Gradian’s parent organization. “When we think about what strategic direction to take, how to market our product, or which countries to enter, we have to consider whether those decisions support the foundation’s mission,” she said. “If we were a traditional for-profit or a 501(3)c [nonprofit] entity, we might just be able to press forward in some of our activities.”

On the other hand, she continued, “As part of the foundation, Steve and I had reliable salaries from the start. We had immediate access to an infrastructure with people who could cut checks, set up an e-mail account for us, and take care of other basic require- ments that are essential to getting a business started.” Importantly, Gradian also benefit- ted from the relationships and other resources at the foundation’s disposal.

Overall, summarized Frenkel, “Working with a foundation and philanthropic money has been an immense asset to us. As project-related investments are becoming more com- mon with some foundations, looking to these organizations for seed funding, invest- ment, or other forms of support is an incredibly powerful option for innovators who may be developing products that aren’t inherently profitable.”