Going The Extra Mile For Health 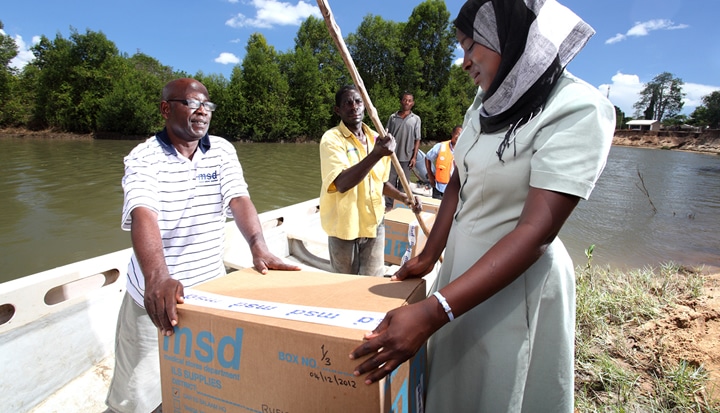 Going The Extra Mile For Health


In the distant corners of Africa, entrepreneurs deliver goods and services across bumpy roads, crossing brimming rivers and rickety bridges, climbing steep hills and descending treacherous valleys. It is a classic story of conquering odds to reach the unreached.

This story once inspired a potent question: If a company can deliver soft drinks to the most remote towns in Africa, why can't essential medicines get there, too?

Five years ago, the Global Fund to Fight AIDS, Tuberculosis and Malaria turned to the private sector for expertise and support to deliver essential medicines and medical products to far-flung locales. In 2010, The Coca-Cola Company took up the challenge, announcing a pilot project in Tanzania.

The public-private partnership that ensued transfers expertise in supply chain management from Coca-Cola to the public health sector in partnership with Tanzania's Medical Stores Department (MSD), the Global Fund, the Bill & Melinda Gates Foundation, and Accenture Development Partnerships. It brings drugs and essential medical supplies to the hardest to reach areas of the East African country.

Called Project Last Mile, the partnership, which is now four years old, has borne tremendous fruit. The Yale Global Health Leadership Institute (GHLI) joined the initiative to evaluate the project, documenting the development of the partnership and its implementation in Tanzania and identifying factors that have made it successful.

Before the project, MSD -- an autonomous entity responsible for procuring, storing, and delivering medicines throughout Tanzania -- faced significant challenges in its work, resulting in delays and stock outs. Thanks to the partnership, MSD reports that it has been able to improve medicine availability in some areas by 20-30 percent.

Project Last Mile also has also supported MSD in widening its distribution system from 150 warehouse drop-off points to more than 5,500 health facilities, whose managers are well in tune with patient needs, much as retailers do with consumer products.

Building on the success of the initial pilot, last week USAID announced that it has joined Project Last Mile, alongside the Coca-Cola Company, the Global Fund to Fight AIDS, Tuberculosis and Malaria, and the Bill & Melinda Gates Foundation. The partners will expand the project by investing more than $21 million in addition to significant in-kind contributions to help provide access to critical medicines and medical supplies in eight additional African countries, increasing from the initial investment in Tanzania.

With an increased investment and the entry of USAID to the partnership, the project has gained tremendous momentum. In its new frontiers, the project is expected to bring life-saving solutions to more and more locations. For example, in collaboration with the Ghana Health Service and the Gates Foundation, the project aims to improve cold chain reliability which is vital to vaccine efficacy, maintaining drugs at controlled temperatures throughout the supply chain to prevent them from perishing. The Bill & Melinda Gates Foundation has also tapped into the private sector's marketing expertise to improve awareness of vaccines to ensure children get fully immunized in the West African country.

In Mozambique, the partners aim to leverage existing collaborations between Coca-Cola bottlers and the Clinton Health Access Initiative (CHAI) to support delivery of essential medicines with an initial focus on developing a performance management system.

With Project Last Mile's strong emphasis on country ownership, and its ability to bring together the golden triangle of civil society, government and the private sector, the initiative will bring more essential and life-changing products to more and more people across Africa. We are extremely proud that our organizations have joined hands in this partnership.

By tapping into the strength of our diversity, bringing together our best qualities, we can make a transformative difference in the lives of millions of people.

This article was first published on Huffington Post and is reproduced with permission.