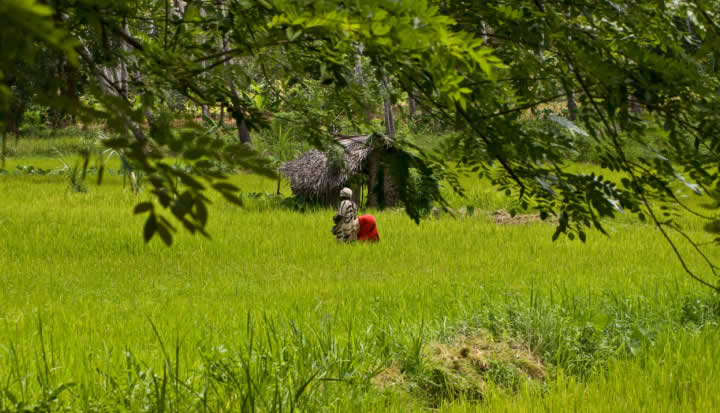 
We are in the midst of some of the biggest weeks on the global food and nutrition calendar. Last weekend the Nutrition for Growth Summit announced new funding pledges and this week food and agriculture will be major priorities in discussions leading up to the G8 Summit. Much of the attention is being focused on how to work with the private sector, and the G8 ‘New Alliance’ is seen as the flagship programme for increasing private investment in agriculture and food.

Launched last year, the New Alliance has covered six African countries (a further three were announced over the weekend), and spells out roles for the G8 donors, African governments and 70 participating companies:

The initiative promises to lift 50 million people out of poverty by 2022, and leverage serious money: $3.75 billion in private sector investment, according to USAID.

How does the New Alliance link agriculture to nutrition?

There’s been lots of debate about the New Alliance. Donors have championed it, but African farmer and civil society groups and some international NGOs argue it is a form of aid conditionality. Whether the New Alliance investments will benefit small farmers is under scrutiny (see a recent report by CIDSE). But alongside this debate, very little has been said about how the New Alliance might stack up against two of its headline goals: food security and nutrition.

The Alliance sets goals to increase agricultural investment and promises to coordinate with ongoing nutrition activities. But increased agricultural production or incomes does not necessarily improve nutrition. So, do the investments look like they will make nutritious foods more accessible for the people who need them?

Looking at the 6 country frameworks that have been published, we find the following. 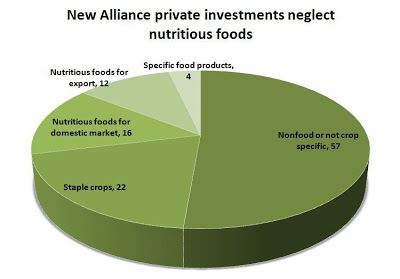 Nutrition appears not to be top of the agenda for the New Alliance. The initiative’s objectives to facilitate private investment take pride of place, if you go by what the Alliance promises to measure and report on. Côte d’Ivoire is the only country whose framework includes reducing malnutrition as an indicator for judging the success of the initiative. ONE has similarly recommended that the Alliance should post measurable nutrition goals.

But if we want to make combating undernutrition an important goal, then the New Alliance needs to invest in the right crops and activities, and make sure these are targeted to the populations who suffer most from undernutrition (mothers and infants in the 1000 days and especially the rural and urban poor).

Linking investments around farms to the foods that vulnerable people can eat means coordinating action all along value chains. In our work on agriculture and nutrition, IDS is looking at case studies of how to connect upstream, agricultural production to efforts to get nutritious foods to consumers downstream (earlier, I wrote about a well-known initiative in Bangladesh). More later on the lessons we are learning.

Let’s see if this week’s G8 discussions focus on how to get the right foods to the right people, in addition to how to increase agricultural growth./p>

A note on the data: This analysis is based on publicly available information on the New Alliance. The figures come from the country cooperation framework documents, which provide brief statements summarizing the private sector investments promised at the time the frameworks were published. We don’t know if further promises have been made since then or which projects are being implemented. And there’s no evidence about the impacts of these investments. Still, one year into this programme, it’s a good time to look at what has been promised.