From Digital Divide to Inclusion: How to Make Digital Finance Work for India’s Women 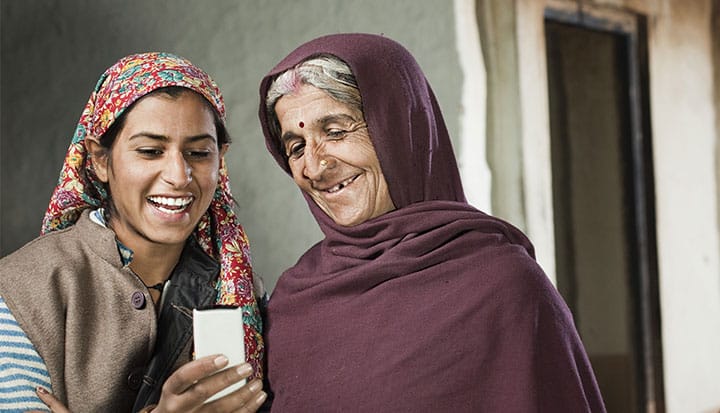 
Often heralded as a panacea for financial inclusion, digital financial services could exacerbate the gender divide, unless there is a concerted effort to develop women-friendly products and channels.

Despite recent successes in India’s financial inclusion journey, Indian women still cannot access bank accounts, loans, and other financial services as easily as men. In 2015, only 35 percent of Indian women had used their bank account in the last 90 days, compared to 49 percent of men. Digital finance is often heralded as a solution to extending access to the financially excluded, especially women, as it offers new opportunities to personalize financial services and deliver them through accessible channels.

However, the story on digital access, a necessary precursor for digital financial services (DFS), is sobering. In 2015, according to Financial Inclusion Insights (an annual nationally-representative survey), only 44 percent of women in India owned phones, compared to 75 percent of men. A survey by Pew in 2015 found that 27 percent of men owned a smartphone or accessed the internet at least occasionally, compared to only 17 percent of women. If we do not address the underlying issue of women’s access to technology, the focus on digital financial products could result in women becoming more marginalized from financial services.

Our recent research with consumers across five Indian states, conducted in partnership with Omidyar Network, helps shed some light. Across regions, digital access is largely associated with entertainment and social media. Consequently, men hesitate to provide phones to their daughters or wives as it may lead to ‘bad influences’ and harassment. “Girls shouldn’t be given mobiles, who knows who will call them…who they will talk to?”, was a common refrain we heard. Notably, many women have also internalized these perceptions and restrict themselves from using phones and the internet.

So how do we radically change the game? How do we make ‘digital’ an enabler of, rather than a barrier to, gender parity in financial inclusion? Our research suggests that this requires a four-fold approach:

First, build safeguards against online harassment. During our work, we ran a search online for the number of people using a popular messaging app in India. Listed on page 1 of the search results were websites with the names and, disturbingly, the phone numbers of women on that app. In Bangalore, a homemaker, Deepa, told us “I stopped keeping a phone after an unknown man would call me at night. My husband thought I was having an affair.” Media reports have further amplified the gendered problems associated with mobile phones and online usage - scores of articles focus on the role that mobile phones play in divorce or the harassment of women. Building intuitive safeguards into product/service portfolios, such as a help button that alerts pre-determined contacts and launching campaigns to teach women to protect themselves while on the phone or online is likely to have a positive impact on women procuring phones and going online.

Second, customize user interfaces (UI) to suit the less-digitally literate. Women are often less digitally literate, and hence, are less confident in their ability to use digital products. We met Asha, a homemaker in Karnataka, who drew images of her ideal application and said, “since I can’t read or write properly, the pictures make sense to me. Also, only I should be able to access the app.” Simple visual cues could reduce errors and build their level of confidence. Auto lock and unique password features would help overcome the security barrier for women who use a shared device. In the long run, agent-focused onboarding, increased use through trial and error, and a focused investment in increasing women’s digital literacy will build women’s confidence with digital products.

Third, listen and learn. Critically, we must understand the kind of digital products women need and want, and then create tailored products that fit their requirements. For example, many women we met had multiple loans and expressed a need to easily track repayment schedules. Lakshmi, a middle-aged woman, told us, “I have four loans…if there is an app that shows the outstanding amount and payment date, I will use it.” Furthermore, creating simple digital micro-saving accounts that enable women to bank small savings, would resonate, given women are often highly motivated to save. Women were also excited by the prospect of using digital products for healthcare and education and entertainment of their children.

Finally, focus on the delivery channel. Many women face socio-cultural and financial restrictions limiting their ability to travel outside their locality. Consequently, women have a strong preference for banking through agents, irrespective of the agents’ gender. “The same agent has been coming to our village for 20 years. He explains products to us and answers all our questions. We can trust him.”, Asha told us in Telangana. Women need and want support with onboarding. Agents that are easily accessible, known in the local community, understand the socio-cultural context, and take the time to listen to and answer questions, offer the most viable channel for women to move to digital.

The push towards digital will serve India well in the long run, but concerted efforts are needed to ensure that women are not left behind.