For Women in India Small Loans Have a Big Impact 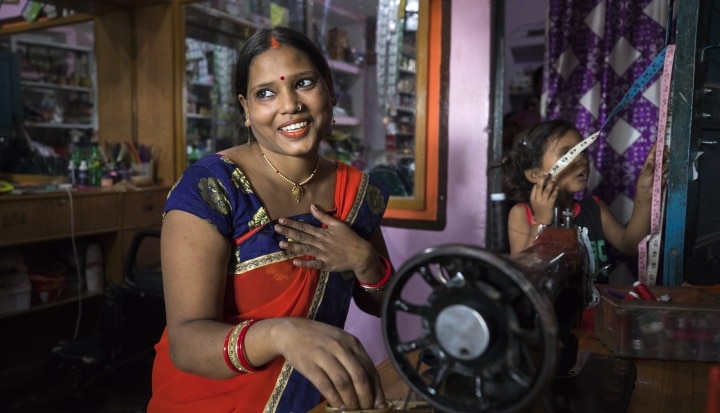 Microloans help millions of families start and expand businesses, purchase essentials, and support their children’s education. Over the past decade, IFC has helped create a market for microfinance in India by investing $564 million in equity and debt.


In Harhua, India, a sleepy village on the outskirts of the ancient city of Varanasi, Irawati Devi stands proudly under the bael tree that shades her home. Goats scour the ground around her mint-green food carts, searching for traces of the fried noodles and samosas she sells.

“When we first moved to Harhua,” Irawati, 58, recalls, “we wrapped saris around bamboo poles until we could afford to build walls.” With one small loan after another, averaging $290 at a time, she gradually managed to replace her home’s makeshift partitions with brick walls. She then bought the food carts, pots, and utensils to start the business that now supports her family.

Irawati’s story of using small loans to lift herself and her seven children out of poverty is one that could be told by millions of people across India. Lending to microfinance borrowers, mostly women in rural areas, has increased by 900 percent over the last six years—from $2 billion in 2012 to $20 billion 2018. With these funds, millions of marginalized families have started and expanded businesses, purchased essentials during emergencies, and supported their children’s education.

Over the past decade, IFC has helped create a market for microfinance in India by investing $564 million in equity and debt—including $5 million in Utkarsh, which now has 400 micro-banking offices that serve 1.7 million borrowers, including Irawati. Today, IFC has investments in more than a dozen financial institutions that together represent nearly half of all micro-lending in the country—reaching up to 70 million people, directly and indirectly.

The numbers are impressive, the stories inspiring. That was why, on a recent day, Utkarsh’s Chief Executive Officer Govind Singh appeared on Irawati’s doorstep. He spent part of Utkarsh’s ninth anniversary in Harhua, the village where he and 11 employees began issuing the company’s first loans. In 2010, when Utkarsh consisted of little more than three chairs in a dusty room, Irawati was one of its first customers.

“Thank you for your money,” Irawati says, standing beside her youngest son.

"It’s not my money. It’s yours,” Singh replies, thanking her for using the loans to support her family.

Improving the Governance of a Growing Sector

At the time of Utkarsh’s founding, a crisis of confidence had struck at the heart of India’s microfinance industry. Amid allegations of abusive practices by some lenders in the southern state of Andhra Pradesh and a campaign encouraging borrowers to default on loans, the central bank in 2010 introduced restrictions and regulations that virtually shut down the industry—lending to microfinance institutions decreased from $2.4 billion in 2011 to $835 million in 2012. IFC adopted a comprehensive view of the sector during this period. Investing in and providing advisory support to several well-managed microfinance institutions, including Utkarsh, helped restore confidence among market players.

“During the crisis, IFC not only supported us; they also created structures that could be used by all microfinance institutions,” says Singh.

One of IFC’s most significant contributions to the fledging sector was a framework to manage risk. It focused on borrower welfare and provided new protections to help ensure that clients understood the terms of their loans. Before this, “there was hardly any focus on risk management for microfinance institutions,” Singh recalls.

IFC also worked with the World Bank to develop a code of conduct that established a common framework for responsible finance; more than 90 percent of the microfinance sector adopted these practices. “These were two very critical products…that gave confidence to the regulators and to the government agencies,” says Singh. “Things became much better for the microfinance industry as a whole.”

With this support, Utkarsh trained and hired staff, opened new bank branches, and better tailored its financial products to meet the needs of women, who make up 97 percent of Utkarsh’s borrowers.
Strengthening Communities

The markets of Varanasi, on the banks of the Ganges River, are a sensory overload: a feverish din of auto-rikshaw drivers and livestock herders, amid crowds of vendors selling everything from hand-knotted carpets to jasmine garlands. The aroma of pakoras, legumes, and ground spices wafts from family-run food stalls.
Microfinance institutions are important for an economy like India’s, where more than 80 percent of people work in the informal sector. Local banks aren’t typically an option for these entrepreneurs because the fees are too high. In some cases, people lack the documents required to open an account, such as identification cards and proof of income.  Or they cannot read and write well enough to fill out the paperwork.

Singh has these people in mind when he speaks of Utkarsh’s core mandate to strengthen communities and empower women like Irawati, who is part of a lending group of 30 women. This group acts as a guarantor for the repayment of each individual’s loan in lieu of physical assets like cars or homes.

Every two weeks, the group convenes for an early morning meeting with an Utkarsh credit officer to exchange business ideas and make payments on their loans. Millions of women to whom Utkarsh lends money participate in this process of group lending and collective liability.

Many of the borrowers establish bonds with the members of their lending groups. “I now have a support network that I never used to have outside of the family,” says Pramila Devi, while frying green chilies in her shop in the neighboring village of Bahutera. “There’s a feeling of sisterhood. I know that if I’m having trouble, someone will support me.”

Not only has Pramila Devi been able to open a small tea store, nearly doubling her family’s monthly income, but the center meetings have also given her a sense of pride because her lending group calls her pradhan, the Hindi word for leader.
Utkarsh supports its borrowers in other ways as well. Employing only women at some of its micro-banking branches, including at Harhua, helps ensure it is a welcoming space for new clients.

“They feel comfortable talking about their challenges,” says Sabhya Yadav, manager of Utkarsh’s Harhua branch.  She was the first woman from her hometown, Billia, to leave the village for formal employment elsewhere. “They would hesitate, or maybe not even enter, if men were involved.”

Expanding the Definition of Financial Inclusion

Utkarsh’s success is partly due to its ability to combine lending with other initiatives, such as education and health care. Utkarsh’s charitable foundation, which receives 2 percent of the company’s profits, offers a range of services to help women maximize the impact of their loans—from financial-literacy classes to skills and vocational training.
"The definition of financial inclusion is changing,” says Umanath Mishra, the head of Utkarsh Welfare Foundation, while walking through Puranapul Village to oversee a class on savings. “If you have a savings account, but don’t understand the technology or concept, you are still excluded. We teach them when to borrow, how to borrow, and the terms of borrowing.”

The foundation, which serves 450,000 women, also helps connect women to nearby marketplaces so they can increase their income—a step that paves the way for greater social mobility.  It’s why lending to the poorest people in India—190 million of whom do not have a bank account—will remain a priority for Utkarsh.

To have an even greater impact, in 2017 the company transitioned from a microfinance institution to a small finance bank.  It now delivers critical funding to small- and medium-sized companies, known as India’s “missing middle.”  These are an important source of jobs and economic growth. Eight million of these companies lack access to the financing they need to grow—but $230 billion would be required to fill this gap.

Utkarsh’s transition allows the company to accept deposits from its microfinance clients, a move that encourages customers to save.  It can also issue loans at lower interest rates.  Since Utkarsh began operating in this sector, its more than 50 general-banking branches have provided first-time credit to 15,000 companies, with loans ranging from $500 to $6,000.

While Utkarsh continues to expand, “microfinance will remain our focus,” says Singh, looking over the fields and rice paddies that surround the Harhua branch. “This is what we know best. These are the people who need it most.”