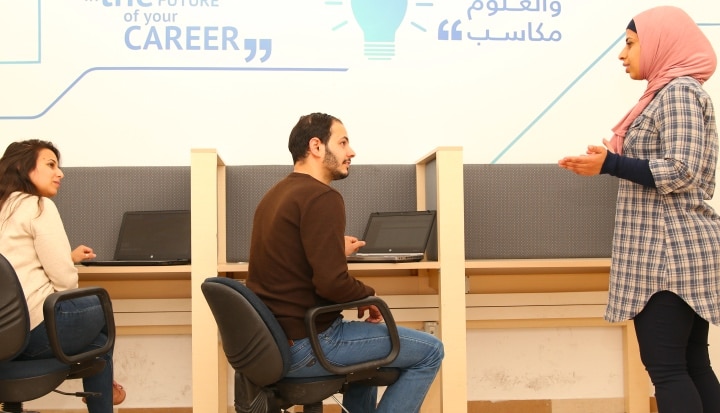 Crowd funding has been a sea change for start-ups, but more work needs to be done to make it accessible to developing world entrepreneurs. In addition, large companies and development charities could do much more to use a small part of their procurement budget to support start-up ecosystems.


Way back at the dawn of the Internet age, a shiny new thing transformed start-up finance.

Until then, entrepreneurs relied on friends, neighbours and family for loans, ideas, market research, help with a variety of tasks and first customers. Now you can do all these things by talking directly to 4.6 billion people who are online, developing communities of interest on everything from T-shirt design to classifying galaxies. Thanks to the Internet we can harness the crowd.

In 2008, an industrial design student in the Netherlands faced one of life’s big conundrums: when you are cycling and your phone rings, should you ignore it or stop and take the call? So he cobbled together some funding and a team, and designed an affordable smartwatch prototype that told the time and who was calling your phone. The problem was they needed $200k to get into production.  So they turned to crowdfunding using Kickstarter, inviting the public to pledge $115, which would only be taken if the target was reached, in return for the ‘Pebble’ watch when became available. In effect, backers were offered a pre-launch discount in order to make it happen. To the surprise of everyone, over 37 days in 2012, 68,929 backers raised over £10m and Pebble sold more than 400,000 watches in their first year. Kickstarter demonstrated there was a market and provided funding, initial customers and much publicity. Sadly, Pebble closed in December 2016.

By July 2020, 18m people have enabled 184,000 projects to raise over $5bn on Kickstarter alone. Current listed projects include Fairafric, a German – Ghanaian social business which has achieved its €100k goal to help build a solar powered chocolate factory in rural Ghana. It aims to “change the course of chocolate history” by changing the value chain in the industry. Meanwhile, luxury African handbag producer Olori, which aims to empower women and help pay for girls’ education in Africa, recently met a $20k target.

Crowdfunding can be used to ask for donations (e.g. Just Giving); business loans (e.g. Funding Circle); equity funding (e.g. Crowd Funder) or to offer a reward in return for funding (e.g. Kickstarter, Indiegogo). There is even an Impact Investment platform (Lendahand).

So you can build a global business from your back bedroom or shack in Kibera. However, in practice, developing world projects are massively under represented on Kickstarter. Those that are using the platform are often partnerships with Western entrepreneurs or entrepreneurs educated in the West.

There is nothing wrong with this as such: I’m a partner and investor in Transcend, a successful BPO business in Palestine, and I’m helping further develop Transformational Business Network to facilitate this type of partnership.  But what do we need to do to scale up the use of P2P Impact Investment finance in the developing world? Business training, accelerators, mentoring and help with English language training must all play a part. Anyone looking for an Impact PhD topic?

P2P is, however, only part of the story. Other types of finance will also be needed by many companies. The problem is not so much a lack of finance but investable companies. The big challenge is getting a viable base level of sales quickly enough to cover set up and fixed costs. The Catch-22 at start up is the need to have orders to obtain finance to set up production, but the need for production facilities to obtain orders.

This is where large companies and charities could help at virtually no cost. Naturally suppliers need to meet competitive levels of quality, value and reliability. My experience with Transcend, which built a call centre facility to global standards and later added a much praised software development unit, was that it proved virtually impossible to get beyond large company CSR teams. This was true even when Transcend grew to significant size. Large development charities are also difficult to get into: it was difficult to convince managers that suppliers on the administration and fund raising side could also be part of the charity’s mission.

Crowd funding has been a sea change for start-ups, but more work needs to be done to make this accessible to developing world entrepreneurs. In addition, large companies and development charities could do much more to use a small part of their procurement budget to support start-up ecosystems.