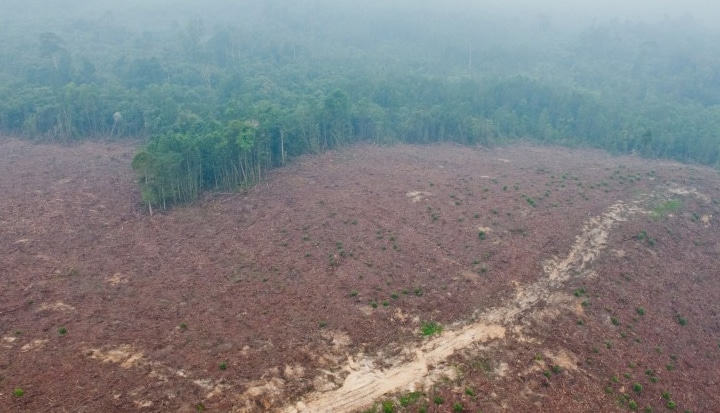 In Indonesia, where forests are being destroyed at the highest rates in the world, an untapped solution exists for balancing conservation with economic expansion.

Indonesia is the world’s fastest deforester—a dubious distinction that once belonged to Brazil. A recent reportrevealed that more than 2 million acres of primary forest are cleared each year, mostly due to palm oil plantations. Palm oil is found in half of all packaged products—from cookies to deodorant—and is a highly lucrative commodity, making it difficult for Indonesia to halt its production. But while Indonesia struggles to balance its economic needs with its role in climate change, indigenous communities are already modeling ways that strong economics can coexist with sustainable forest management.

While the United States and China are the largest emitters of greenhouse gases in the world, Indonesia is the third largest. The majority of its emissions come from the destruction of forests and carbon-rich peatlands, which take thousands of years to form and store 20 times as much carbon as rainforests. Palm oil producers regularly clear vast tracts of these valuable carbon sinks by draining and setting peatlands on fire.

Indonesia is essentially sitting on a carbon time bomb—about 60 billion metric tons of carbon is stored in its peatlands. If all this carbon were released into the atmosphere, it would be the equivalent of burning 67% of all the oil reserves from Saudi Arabia, Venezuela, Canada, Russia, and the United States combined.

In addition to accelerating climate change, forest fires present a massive health hazard—this summer’s fires on Sumatra prompted complaints all the way from Singapore about the choking smog, and people in Indonesia often say that the year has been shortened to 9 months, as it’s impossible to do anything during the 3-month fire season. Moreover, the deforestation is rapidly destroying habitats that once sheltered tremendous biological diversity and animals like theendangered orangutan.

Despite pay-for-performance agreements aimed to stop deforestation (such as the $1 billion REDD+ programfunded by Norway) and recent pledges by several large companies to eliminate conflict palm oil from their supply chains, developers are still clearing forests at an alarming rate.

The activity is also a human rights concern, as indigenous communities are frequently displaced in the process. One report has estimated that nearly all of Indonesia’s palm oil concessions have been for land that is already inhabited.REDD+ officials have estimated that indigenous groups hold 45 million hectares of forest currently being misused for commercial concessions. But because indigenous communities have no legal land ownership rights, concessions are made by the government without their knowledge. Land tenure conflicts are common and have ended in violent clashes between protestors and hired security.

But excluding indigenous communities from land-use decisions results in a missed opportunity. Respecting indigenous rights isn’t just the right thing to do—it could be a powerful strategy for balancing economics with conservation, and for tapping an effective resource for sustainable land management.

“They know the land well, and determine which areas have conditions that are most suitable for farming, and which forest areas should be protected for traditional hunting. They also define sacred areas, dwelling areas, andtembawang – agroforestry areas for fruits, rubber plants, bamboo, rattan, etc. usually located near the river. The Dayak Iban tribe has a crop rotation system, in which every 5 to 7 years the fields are left to rest and for the forest to grow.”

“We increase the forest honey’s quality through sustainable harvesting techniques and hygienic processing – thus creating more value, increasing the price, and pushing the community to maintain the forest, the bee’s natural habitat,” said Heri. “No forest, no honey bees, no income – this creates the incentive and motivation.”

By organizing independent collectors into a forest honey association, Riak Bumi has been able to set market prices, ensure consistent quality, and give honey collectors a stronger voice in the ongoing debate about Indonesia’s conservation and land use policies. Riak Bumi projects that in 2015, its forest honey collectors will produce about 18 tons of honey per year. The organization’s entire network of honey collectors, artisans, and eco-tourism entrepreneurs will benefit more than 7,000 indigenous villagers across the country.

While the lack of legal standing for indigenous communities remains one of the biggest barriers to exploring the economic potential of sustainable livelihoods, progress is being made. Several government agencies have declared their support for indigenous rights, and a new bill is being drafted by lawmakers. Many are also hopeful that the newly elected President Joko “Jokowi” Widodo will help spur much needed policy changes in order to meet the country’s REDD+ commitments.

“By acknowledging their rights, indigenous groups can serve as strategic partners in the protection of forests,” said Heru Prasetyo, chairman of Indonesia’s REDD+ Management Agency. “[The] full participation of indigenous people will support Indonesia’s commitment in reducing greenhouse gas emissions — 26 percent by its own and 41 percent with international help by 2020.”

With new legal protections and initiatives like Riak Bumi helping to increase the economic value of protected ecosystems, indigenous communities could have a huge role to play in halting deforestation and climate change. Clearer skies may be on the horizon after all.

Arthur Guinness Projects and Ashoka are supporting ideas that help unlock the potential of communities around the globe.

This article originally appeared on Forbes.com.