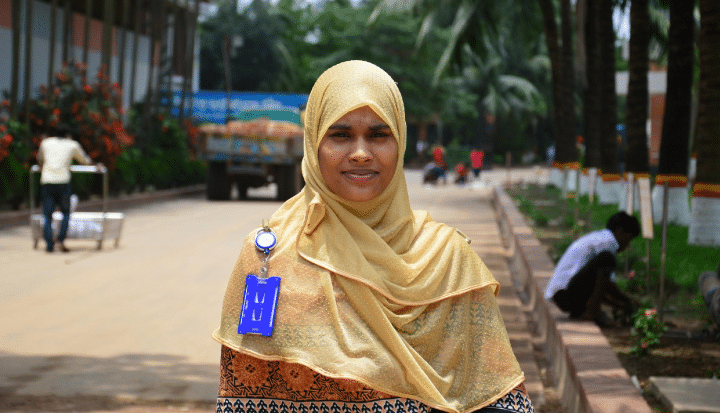 Bangladeshi garment company DBL Group are supporting career progression of its female employees through an accelerated leadership training programme. They share their experience of implementing the programme and the positive impact it’s had on both female employees and the business.


The readymade garments (RMG) industry in Bangladesh is the greatest contributor to female employment in Bangladesh; over 3.2 million of its employees live at the bottom of the economic pyramid (defined as people with less than US$10 per day in purchasing power in 2015 US dollars). Recognising this, at DBL Group we have focused on increasing the number of female workers: in 2012 women made up only 35 percent of DBL’s female workers in its garments manufacturing units, but today, in 2018, almost half of our employees (49%) are female.

Due to the higher proportion of female workers in the workplace, it also made sense to us to increase the percentage of women in middle management positions. To do so, we have actively promoted existing staff into supervisor roles. The advantage of the promotion is the workforce not only feels empowered as they see it is possible to progress their careers within the company, but it also has the benefit to us that the existing employees will already be familiar with the systems and culture of the organization.

To support these women to excel in their supervisor roles, we provide a 165-hour comprehensive training program that helps build both soft skills and technical skills essential for leadership positions. This training, known as the Female Supervisors Leadership Program, addresses multiple topics including counselling, house-keeping, safety, self-analysis and development, self-motivation and motivating others, communication, along with the company code of conduct, and production and quality modules.

When talking with some of the women who have completed the program, they stressed the importance of such an extensive training. One supervisor, Taslima Akter, said: “The training helped me gain knowledge of communication skills which allowed me to be more receptive to my subordinates”. Her colleague, Mosammat Khadija, made a simple but very powerful statement that illustrates the value of having more female supervisors for our female employees: “Women’s issues are best understood by women only”.

The inclusive business case here is that the majority of women who are now in supervisor roles come from low-income backgrounds. After being promoted, they have substantially increased their earnings: salaries are as high as 108 percent more than their previous positions. The supervisor position also opens the pathway to career progression: to Line Chiefs, In-Charges, and even Production Managers. One supervisor, Julekha Akter, has been offered a promotion, and is motivated to progress even further: “I have been offered the position of Line Chief, but I wish to learn more to grow into the role”. This showcases the interest, but at the same time denotes the “responsibility” aspect. Experiences like Julekha’s defy the assumption that being a low-income factory worker has very limited professional progression; she is proof that with commitment and hard work, she can turn it into a “career”.

It is important to note that the benefit to investing in the career progression of our female employees doesn’t only lie on the side of the recipient of this training. We have also seen a positive impact on the company’s business. Female employee annual turnover in DBL is now only 2 percent compared to up to 6 percent in 2011. Absenteeism has also been reduced from 8 percent in 2011 to 3.6 percent. We also found in one study that the sewing lines led by females were 3 percent more efficient than the male-led lines, which translates to an added production worth up to US$624,000 every year.

However, there are challenges. The first batches of female supervisors had to deal with a rather uneasy situation since the workers were not used to having a female running their lines. This, of course, subsided in time. The rather newer challenge is work-life balance. The supervisor position is more taxing than a line worker position; they are required to be the first ones to get in to the workplace and the last ones to get out, which means that family members of female supervisor are not always supportive.

Supervisor Lucky Akter: “If a woman can be our Prime Minister, we can manage a sewing line too”.
To mitigate this, the existing supervisors are playing a great role in motivating the workers. The supervisors are sharing their experiences in having an opportunity to advance their careers. In addition, they are motivating them by explaining that this will help their children have a better future too, as they can attend better schools and go for higher education. Things will not change overnight, but they can improve. DBL now aims to have 50 percent of sewing lines led by female supervisors by 2020. The steadily increasing number of supervisors means this goal is achievable.

The performance of female supervisors to date has been commendable, and has added value to the company in many respects, addressing issues like women’s empowerment, discrimination, gender equality and diversity. I believe increased engagement of female supervisors in Bangladesh’s RMG industry will bring many benefits: the most important of which is leadership that results in better support for female employees. And as another supervisor, Lucky Akter, stated: “If a woman can be our Prime Minister, we can manage a sewing line too”.

This article first appeared on Business Call To Action and is reproduced with permission.