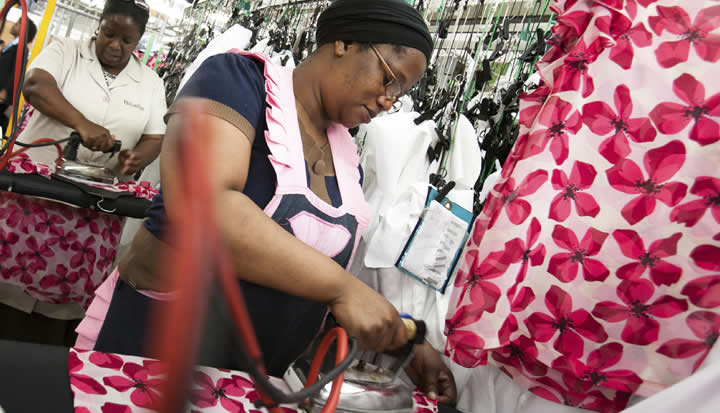 
Women and fashion have a longstanding and complex relationship: often a source of joy as well as contempt. In the sleek surroundings of a London Soho art gallery, Rook and Raven, two leading female sustainable fashion experts exposed some ugly truths about fashion, and the visionary efforts underway to revolutionise the industry as part of the Women Advancing Microfinance UK speaker series.

Dr Pamela Ravasio, winner of UK “Green Oscar”, the Observer Ethical Award, and textile supply chain expert, ranked the fashion industry as the 2nd worst in the world in environmental and social abuse – right after agriculture. Behind the basic white tee and the darling dress, there are often stories of child labour, chemical poisoning, slavery and textile waste – to name but a few ills. Most fashion savvy consumers and creators aren’t purposefully inflicting such terrors on the world, Ravasio argues, but in a veil of unknowing many are ignorantly or blindly allowing a network of harm to propagate in the service of style. When one is confronted with a t-shirt; and 2.4 billion are produced a year; one often has no idea who made it and under what conditions. A traditional conception of fashion sees that impact is measured by aesthetics and functionality, which focuses on the design level. Often designers have never been in a cotton field or a dye factory – they have no conception of the wider impact of their design decisions, or any relation to the effects they are causing. A fashion supply and distribution chain is often so fragmented that the full story of an item of clothing, from how the crop was grown, the labour conditions in which it was made to how the waste products are disposed of are rarely fully known. The button may be from Taiwan, the cotton from China, the worker from Bangladesh – the assembly line is often global and multi-partied. Ravasio revealed that 25% of the world’s pesticides are used in relation to the fashion industry –how many fashion insiders and consumers even consider this factor when faced with a new item of clothing?

Ravasio is working to address this lack of knowledge – or perhaps willingness to care, around the negative impacts of the fashion supply chain. The status quo is changing, she argues, some major schemes are underway. Puma introduced the landmark environmental profit and loss accounting; in 2011 its supply chain constituted 94%, or 137MN euro worth of its total environmental impact. Other brands such as Nike, H&M, M&S and Walmart are launching pilots to make their supply chains more sustainable (click on the links for the respective initiatives). Some of these brands may be reacting to reputation damage from bad practice, but change for the better is welcomed. M&S calls their initiative Plan A – because there is no Plan B without sustainability. Understanding and addressing the negative effects of the supply chain, and in some cases creating positive impact, is becoming part of the business. Change may still be in silo, but it is gathering momentum. A quick look at our online partner Business Fights Poverty shows a vibrant community seeking to maximise supply chains for development, in fact you may be reading this blog out of awareness of this issue already.

Rupa Ganguli, founder of the NGO Women’s International Textile Alliance, known as SPINNA, provided an anecdote on an individual’s experience of the fashion distribution chain disconnects. Large fashion houses tend to dominate fashion, but it is also an industry of microentrepreneurs, many of whom are from developing countries. Ganguli cited one of her clients, a low-income Peruvian woman designing alone using baby alpaca wool and silk. She visited New York for the first time as part of a development conference, and whilst wandering through the Village, the city’s famous home of handsomely priced goods, she came across one of her designs in a boutique. She was delighted, had no idea how it got there and she was terribly curious as to what it was retailing for. She looked at the price tag and was blown away – it was selling for $450. She had sold it to an agent for $35 and had thought she had secured an excellent price for her handicraft. She was then shocked to learn that the store owner was already selling the item at a discount – standard industry practice is to double the amount paid to the agent, in this case the item was purchased for $250. The microentrepreneur was astounded – her agent, whom she had supposed was giving her a fair deal, had pocketed $215 by on-selling. She lived in a remote rural part of Peru, was not technologically literate and didn’t have personal access to the international market despite the fact that her work was selling globally. In that instant she became ever more convinced about working with SPINNA, to educate herself on international pricing and distribution.

The example Ganguli gave of this Peruvian entrepreneur is a happy one, she now has access to an international NGO dedicated to empowering her work, making her goods accountable to international standards, and hopefully her revenues accountable to her skill. But this microentrepreneur is also a lucky one – she had access to finance to start her business in the first place, is self-employed and now aware of sustainability practices and market information via SPINNA. There are many women and children in the industry, exploited under tough conditions. SPINNA hopes to change this landscape by growing textile worker groups to give them a voice and information on the industry to strengthen their position.

This isn’t a developing world story; Ravasio gave some uncomfortable statistics on the Garment District in New York – one of the leading global textile manufacturing hubs. 82% of the workforce is female and only 37% are in executive positions; on average a woman is paid 15% less than her male peer. Women and the fashion industry share an uncomfortable relationship despite the fact that it is often considered a female industry – with more women consumers spending money than men. It’s also a sizeable one, in the UK alone, the fashion industry is valued at £21 Billion making it similar in size to the food/beverages services and telecommunications industries and larger than the automotives, sports, chemicals and advertising/video sectors, according to the British Fashion Council.

To support fashion as a tool for development there are many ways to get involved as an individual. Ravasio’s firm, texƧture, advises mindful consumption – a “make do and mend” mentality and to exercise the power of your pound by purchasing quality and sustainably produced items. Always ask, always challenge the brand you purchase, she advises – the fabric may be organic, but are labour conditions ethical? To educate yourself further she recommends the Ethical Consumer Magazine and to find out as much as possible about recycling in your borough. SPINNA is launching a London Circle to engage fashion and textile workers in ethical and sustainability dialogue and practice – head down to their launch event at the Oriental Club on October 10th and find out more. Invite here.

WAM UK had a great evening with our speakers, and enjoyed the showcasing of Victoria Hughes’ African inspired fashion-start up, Umoja. Despite all the harrowing truths in the fashion industry, what was clear on the evening was the engagement to make change for the better. From the audience member wanting to understand how to make her consumer choice an ethical one, to the high-level discussions on how big brands are reconsidering their supply chains. The global textile industry is a sizeable force, which can be harnessed to improve the lives of its workers, mostly women, considerably.

If you’d like to find out more about upcoming WAM UK events please email us at: [email protected]

Our next event will be on Inclusive Business with Cafe Direct – complete with coffee tasting on October 17th in London. Click here for more information.

This blog first appeared on WAM UK's blog and is reproduced here with permission.

WAM UK
Founded in February 2011, WAM UK is a unique networking association and one of 14 chapters of of WAM International. We advance and support women engaging and working in financial inclusion and microfinance through education, networking and promoting leadership and volunteering opportunities. WAM UK has a special focus on promoting and supporting financial inclusion and microfinance in the UK, as well as internationally, to empower women in our communities.