Educating Girls - From Marginalized to Empowered 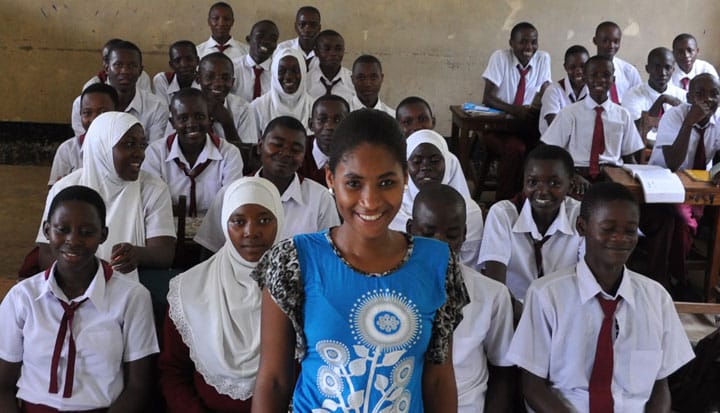 Image: Learner Guide Zuhura with some of her students in rural Tanzania. Photo: E. Powell/Camfed International

Educating Girls - From Marginalized to Empowered


Pearson and international NGO Camfed have announced an expansion of their existing partnership aimed at educating and empowering girls from low-income communities in Zimbabwe and Tanzania. Their work is being extended in Tanzania to support 6,400 more children in 80 schools. It is being led by young educated women, trained as “Learner Guides,” who return to their rural schools to mentor and deliver a life and learning skills curriculum to vulnerable children. To recognize their achievements, Pearson has developed, and is now awarding, a custom BTEC qualification. Pearson is also launching an employee fundraising campaign, which it will match, to help send girls to secondary school.

Here, we explain how Camfed’s Learner Guide program, supported in part by Pearson, is helping to create life-changing opportunities for so many young women.

Education as a Vehicle for Change

Pearson and Camfed first partnered in 2013, with the shared goal of transforming educational opportunities for girls and young women from low-income communities in East Africa.

The partnership contributed to the development of Camfed’s Learner Guide program, which is resetting the context for girls and young women in sub-Saharan Africa.

Learner Guides are young women volunteers from rural areas in Zimbabwe and Tanzania.

Each of the Learner Guides, with Camfed’s help, overcame intense barriers to education. As such, these women are uniquely qualified to provide support to girls at school facing similar challenges.

Learner Guides are specially trained by Camfed in delivering life and learning skills, with a training program developed by Pearson. Afterwards, they return to local schools in their villages to work with younger students who face the very same obstacles to education they once did.

The skills and wellbeing curriculum, called “My Better World,” was designed to boost students’ confidence and assertiveness, and, in doing so, contribute to improved overall learning outcomes.

The program not only boosts students’ confidence, assertiveness and learning outcomes, but gives Learner Guides the opportunity to achieve a BTEC qualification and access to interest free loans to support their entrepreneurial activities and ambitions.

“These girls face enormous barriers to attend and complete school. There are very few opportunities for those who make it through,” says Katie Smith, Director of Operations at Camfed International.

“The Learner Guide program helps them overcome this challenge.”

Nasikiwa Duke is the Program Manager for Young Women’s Empowerment in Tanzania. She directs the implementation of the Learner Guide Program in the country.

In a recent interview, she described the difficult circumstances many young women face:

“After a young girl graduates from secondary school, there is a six- to nine-month period during which she waits to hear whether she has passed her exams. For girls of this age, a lack of guidance and support during this time can make them particularly vulnerable to exploitation.

It is then that we see an increase in girls migrating to urban areas, where they are particularly at risk of being exploited or abused. Young girls with no parents nor familial support are much more likely to marry young or become pregnant.

The Learner Guide program helps the community address this crisis.”

A New Kind of Curriculum

Among other things, Learner Guides encourage young girls they work with to stay in school.

The “My Better World” curriculum they teach focuses on life skills, complementing the existing national curricula in government schools.

The curriculum was developed by Camfed and Pearson, in collaboration with the young women in Camfed’s alumnae network, Katie explains.

“It was a new approach,” she says. “Not many curriculum projects have ever consulted young women in a rural village in Zimbabwe and asked them to sign off on textbook proofs.”

The response, she says, has been “completely amazing.”

“These young women understand rural girls at school like no other – they’ve been there,” Katie says. “And they’re pouring themselves into their volunteer work.”

“Learner Guides make a commitment to work with students for two-and-a-half hours each week, but they’re doing far more than that,” she says.

“They’re raising money to keep girls in these schools, even following up with girls who are at risk of dropping out. In 2015 alone, Learner Guides returned more than 4,500 children who had dropped out of school.”

“This user-developed curriculum has proven its relevance,” she says. “It’s extraordinary what it’s doing for Learner Guides and their students’ self-confidence and ability to learn.”

Five years ago, Camfed launched the Learner Guide program, partnering with Pearson to develop key learning and training resources to support it: the ‘My Better World’ curriculum was launched across nearly 1,000 schools in Tanzania and Zimbabwe.

Since then, Camfed has been tracking 38,000 children from the two countries – some of whom had been reached by the curriculum and some of whom who had not. Children are assessed across a variety of categories, from academics to aptitude to self-esteem.

“The program is still relatively new,” Katie Smith says. “We’re collecting a huge amount of data on girls’ progress, so that we can demonstrate what works – it’s difficult to pick out a single component of the program, as it seems to be the combination of approaches, the holistic model, that is pushing up girls’ outcomes.”

After 18 months, in Tanzania, those girls who had been through the Learner Guide program had double the literacy scores of those who hadn’t. In math, they improved their learning nearly five times over.

After the initial success of their partnership and the Learner Guide program, made possible by investment by the UK government’s Girls’ Education Challenge, a new part of the program was introduced. In September 2014, Pearson committed to developing a unique level 3 BTEC qualification to recognize the work of 5,000 Learner Guides, and certify Camfed as a BTEC awarding center.

A BTEC is a career-based qualification designed to give students the skills they need to move on to higher education, teacher training or to go straight into employment.

Camfed is already helping these girls tackle many of the barriers that get in the way of completing high school,” says Pearson’s Teodora Berkova. “We created the BTEC qualification based on the unique needs of the Learner Guides and in an effort to improve their employability potential.”

The first 567 Learner Guides were awarded their BTECs in December 2016.

Pearson and Camfed are also announcing today that efforts are underway to expand their partnership in Tanzania.

“There is enormous enthusiasm in Tanzania and elsewhere to roll out this program beyond the districts where we’re already working,” Katie Smith says. “Improving education for girls is a major focus for international development goals and our program not only helps young women, it helps governments meet their goals.”

One hundred eighty young women are being trained as new Learner Guides, and are expected to support an extra 6,400 children in 80 schools.

“What we’re all finding,” Katie says, “is that giving a girl a quality education and the support of an empathetic mentor and role model unlocks so many doors.”

“The Learner Guide program is educating and improving the confidence and skills of female students during a difficult transitional phase of their lives. Additionally, Learner Guides are being recognized by their communities, and the social status and respect for these young women is significantly heightened as a result. The program is benefitting not only the Learner Guides, but also learners in schools, their families and even entire communities.”

All donations raised by Pearson employees during 2017 will be matched by the company, further boosting the work of Learner Guides by enabling more girls to enroll in secondary school with the materials they need to succeed.

To further support the Learner Guide program, and enable deeper employee involvement, Pearson has launched an internal fundraising campaign. All donations raised by Pearson employees during 2017 will be matched by the company.

This article first appeared on www.pearsonlearningnews.com and is reproduced with permission.