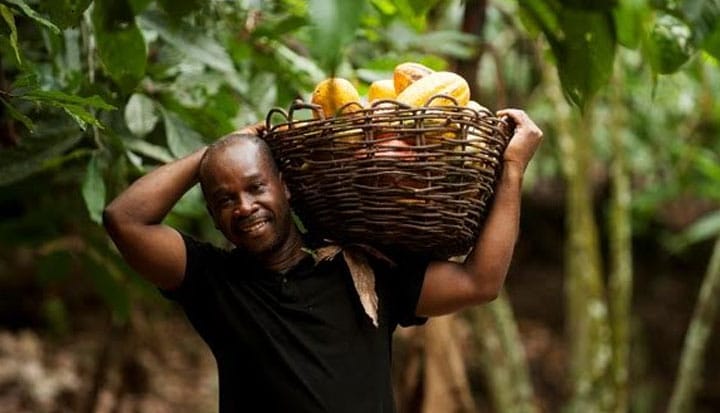 Despite an increase in global demand for cocoa and the worldwide push to tackle poverty when the Global Goals launched last year, today many farmers who grow the crop live with poverty and exploitation - in Cote D’Ivoire 80% of the population still survive on less than 40p per day.

Fairtrade’s 2016-2020 strategy Fairtrade Can, I Can, is aligned to these Sustainable Development Goals. In addition to Fairtrade’s minimum price which is a safety net for farmers, many benefit from an extra sum, the Fairtrade Premium, which enables them to make vital investments in their communities to tackle the root causes of poverty. Producer groups have used their Fairtrade Premiums to establish schools, wells, health centres and health insurance and through this they are building stronger businesses and more resilient communities. However Fairtrade only work if producers can access a market. Despite strong progress (Fairtrade sales in the UK alone topped £1.65bn in 2016) there is further to go: in 2015, for example, Fairtrade certified cocoa farmers sold only a third of their crop on Fairtrade terms, limiting the potential for development which is so desperately needed.

Fairtrade has long called on companies to do more and this Fairtrade Fortnight we are celebrating the news that Co-op will this year become the first UK retailer to source all of the cocoa they buy for their own brand products as Fairtrade. All of it - from the sprinkles on their doughnuts to swirls in their ice-cream, every ounce of Co-Op cocoa will be Fairtrade. This will increase the volumes of Fairtrade cocoa sourced by Co-Op by nearly five times.

This is a very impressive step. Co-Op and Fairtrade together took on the challenge of dealing with a significant number of different manufacturing sites across a wide supplier base and a vast number of products ranging from bakery to cooking sauces. The gain is a comprehensive commitment to cocoa farmers and a strong leadership challenge to others to follow suit. Some businesses in the past have cited supply chain complexity as a reason not to make such a commitment, but Co-op has shown that by sticking to your principles you can achieve great things.

In 1994 Co-op sold the UK’s first Fairtrade labelled chocolate bar and fifteen years ago, realising the scale of change needed within the cocoa industry, made the pioneering step of switching their entire range of own brand chocolate bars to Fairtrade. To accompany their most recent announcement Co-op has released a report on the state of the cocoa industry. This celebrates the work done by Fairtrade, Co-op and partners such as Divine Chocolate over the past fifteen years, but it also highlights the continuing need for change. In Ghana, over 60% of cocoa farmers are aged 55 or over. Every parent wants a better future for their children, so it is not surprising that cocoa farmers see their children moving to cities in search of work, rather than taking over the family farm where prospects for growing cocoa and earning a decent salary are so poor. Without this next generation of cocoa farmers, we risk the inevitable breakdown of farming communities and therefore the supply of cocoa for the chocolate that we love.

As the Fairtrade market matures we are seeing deeper commitment across a range of companies. Our 2016 sales show growth in some of the categories for which Fairtrade is best known, despite the UK’s economic challenges. The Fairtrade coffee market grew 8% last year, thanks to strong support from companies such as high street eatery Greggs, whose business is growing strongly in the UK and which now offers Fairtrade coffee, tea and bananas. Meanwhile household brands such as Tate & Lyle are continuing to show their support for sugar farmers by promoting specialist sugars with a range of activities celebrating Fairtrade Fortnight.

Together, we are changing trade with shoppers, businesses, farmers and Fairtrade all pushing for a fairer future. But we know we have further to go. Our theme for Fairtrade Fortnight this year is ‘Don’t Feed Exploitation’ - we are shining a light on the problems facing producers and the exploitation they experience, still barely surviving on the low prices, wages and poor conditions that trap them in poverty.

Commitments from companies such as Co-Op are an enormous step forward, but of course it will take all of us – shoppers, voters and government too – to ensure trade works for the many not the few. Fairtrade Fortnight is an opportunity to unite behind this common goal, and the hundreds of events planned across the country provide a timely reminder that individual action can and does change the world.