Climate Resilience in Action in Nepal 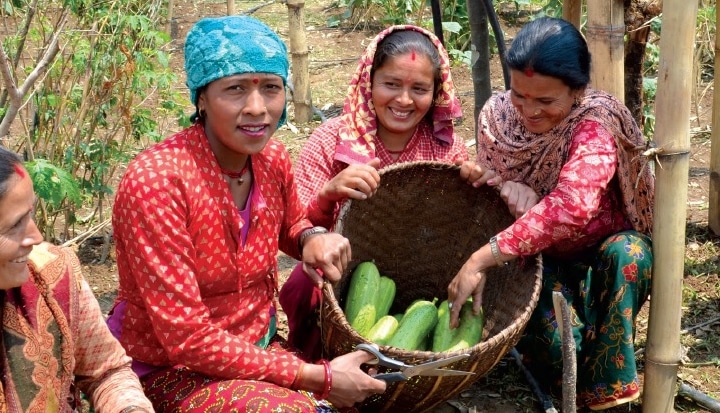 Climate Resilience in Action in Nepal

Manbir is a smallholder farmer from Kwanga village in the Rolpa District of Nepal. He says that increasing community income is critical to combat climate change. Without income, families are focused on growing food just enough to eat and not on adaptation activities, which increases their collective vulnerability to negative climate impacts.

Mabir’s situation is not unique. For a smallholder, whether living in the South-Western plains of Nepal, the highlands of Ethiopia or the North-Western Province of Zambia, the reality is harder than one can imagine. Agriculture is where climate extremes, food and income security, and water availability collide.

At iDE we have been dedicated to creating income and better livelihoods for the rural poor for the past 30 years. Because we spend a lot of time listening to the smallholder farmers we work with, it came as no surprise when many farmers begun to complain about shifts in the start of the rainy season, erratic rainfall patterns and noticed changes in the types of pests and frequency that were affecting their crops.

And they have good reason to be worried. Climate change has often been referred to as a ‘threat multiplier’, rather than an isolated risk, exacerbating threats caused by other causes. According to the fifth assessment report by the Intergovernmental Panel on Climate Change, published in 2014, climate disasters are expected to hit poor people and in poor countries the hardest. This is because of the economic importance of climate-sensitive sectors in these countries (e.g. agriculture), and their limited adaptive capacity to direct and indirect effects of climate change.

In the effort to limit the magnitude and/or rate of long-term climate changes, an approach that uses both mitigation and adaptation is therefore needed to ensure development initiatives are climate-compatible.

iDE recognises the urgent need to adapt how we conceptualise and respond to development challenges through a climate-sensitive lens, ensuring we bring financial security to the communities we work with and protect their livelihoods in the event of extreme weather events and natural disasters. We have been making inroads to put new ideas into practice since the beginning of 2015, with the start of a climate & resilience programme with the aim to incorporate in our work the new challenges posed by climate extremes and disasters.

Under the DFID-funded BRACED programme we have launched Anukulan, a project in the Western and Far-Western regions of Nepal aiming at helping half a million poor and vulnerable people in rural areas build their resilience to climate extremes and disasters like floods and drought. The project will facilitate the use of climate-smart agricultural technologies, such as community level multiple use water systems (MUS).

Rural people need water for domestic and irrigation needs, as well as for generating income. The MUS approach takes this range of needs as the starting point. MUS are piped water systems that provide sufficient water to communities both for domestic needs and for irrigation of high-value crops. These systems specifically address climate induced disasters by helping communities to make best use of scarce water resources and enabling their use in combination with micro irrigation technologies.

iDE MUS are developed as small utilities with a paid manager and user fees. Initial investment comes primarily from local government, MUS users, and limited investment from iDE (about 20% in past programs). MUS represent infrastructure that pay for themselves in less than a year. MUS also greatly reduce the amount of time that women and girl children carry water for households and increase their climate resilience. As primary providers of food and water in most developing countries, women are on the front line of climate change impacts.

Recently a MUS was installed in Manbir Khadka’s village. Today the future is looking brighter for his community; the system is ensuring a constant supply of water, and thanks to that farmers are able to grow high value crops, with each household able to earn approximately £150 per year in extra income.

But we do not work village by village. In order to scale up the approach a number of challenges must be met, including the creation of a strong private supply chain sector and market environment, building the capacity of the range of stakeholders involved (e.g. private, government, non-profit sector and local communities) and the development of enabling policies at national level.

In Nepal and across the world there are strong development silos in governments and donors separating investments in drinking water and irrigation, resulting in higher costs and inefficient use of water. To ensure long-term sustainability Anukulan will be working to scale and institutionalise the MUS approach in partnership with IWMI.

We will update you on how we get on soon!